When AMC brought us The Walking Dead six years ago no one but the most avid fans of the comic series could have imagined it would become the most successful TV show in history, spawning spinoffs, video games and making creator Robert Kirkman a household name. Heck my parents watch it religiously week after week […] 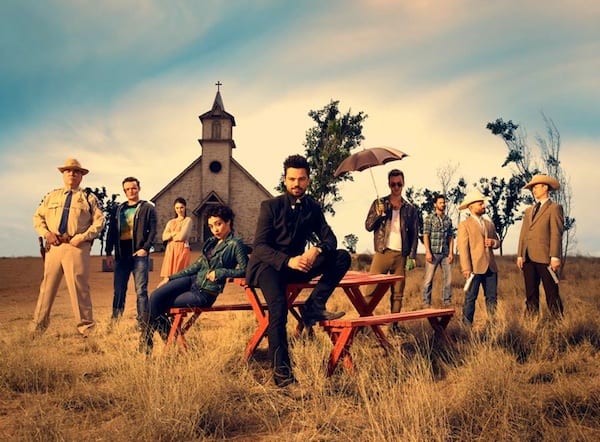 When AMC brought us The Walking Dead six years ago no one but the most avid fans of the comic series could have imagined it would become the most successful TV show in history, spawning spinoffs, video games and making creator Robert Kirkman a household name. Heck my parents watch it religiously week after week and they normally can’t stand the sight of gore or the zombie genre.

Preacher is based on the comic of the same name, created by Garth Ennis and Steve Dillon in the early nineties and focuses on the titular Preacher, Jessie Custer played wonderfully here by Dominic Cooper. Struggling with alcohol and a dark past, Jessie feels his faith shaken as his words and sermons fall on deaf ears; the children in attendance find their tablets and smartphones a tad more riveting than the word of god and the town of Annville seem to have grown past the need for the church.

It seems timely then that as he finds the hold of god weakening, former love interest Tulip (Ruth Negga) reappears in Texas. Tulip may go down as having the greatest TV entrance in recent history, forging cans and kids toys into a makeshift rocket launcher. Both charming and bad ass, Negga is magnetic in this role and has excellent chemistry in the scenes she shares with Cooper.

Rounding off our ‘heroes’ is Cassidy (Joe Gilgun), the fast talking Vampire with a novel way of murdering vampire huntrers with wine bottles. Cassidy is a fan-favourite from the comic series and it’s great to see this translastion of the character pulled off so successfully. Gilgun provides some deeply dark comic relief and imbues Cassidy with a charming sense of swagger.

Upon his casting I questioned Dominic Coopers ability to play the role of Jessie Custer but he is truly impressive in this first episode. Custer is conflicted, struggling with his inner demons whilst trying desperately to do the right thing for the people of Annville. And boy do you buy it when his demons take control. The action throughout the episode is brutal and wastes no time showcasing what the viewer is in for.

Directors Seth Rogan and Evan Goldberg have both professed their love for the source material and that comes through from the opening minute. They aren’t afraid to embrace the blasphemous nature of the comics and whilst some of the more outrageous moments may have to be toned down for television, the spirit is all there. From the hyper violence to the black humour, this first episode does a wonderful job of bringing our main characters together whilst setting up a religious mystery of sorts. Many pilot episodes fall short as they try to cram in far too much information but Preacher succeeds by drip-feeding the audience. What exactly is Jessie running from? Where does Tulips map lead? What on earth is the mysterious force causing Preachers to explode worldwide? Who are the oddly dressed men travelling the globe in search of this force? This isn’t a direct adaptation of the source material and it looks like the show will use key moments from the 75 issue series as more of a roadmap. Something The Walking Dead has also done with great success. This may bother purists but it keeps the show feeling fresh and exciting for all that decide to watch it.

We live in the age of the comic book adaptation and whilst Hollywood has found success condensing superhero storylines into two hour running times, TV has provided an excellent alternative for the more risqué and adult properties. There is arguably no comic book more risqué than Preacher and it is a miracle that this adaptation is so darned successful.

AMC have another monster hit on their hands and with its twisted sense of humour and devilish tone, it may just become a greater success than The Walking Dead.

Let’s pray it does.