John Murphy, 31, waited for the Labour Party leader to walk from Finsbury Park mosque in north London to launch his political attack. 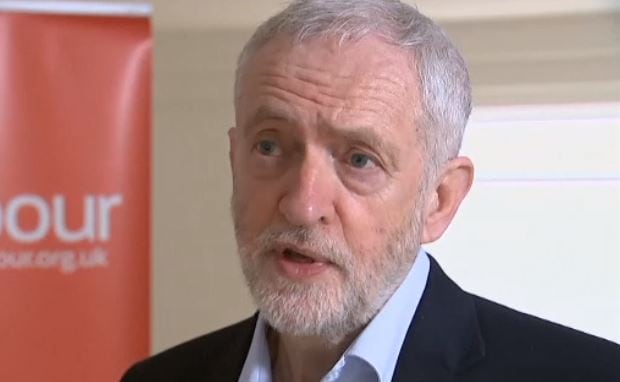 A man who threw an egg at Labour leader Jeremy Corbyn whilst shouting ‘respect the vote’ is facing jail after pleading guilty today.

The assault left the Leader of the Opposition with a red mark on his head has led to Mr Corbyn reviewing his security, Westminster Magistrates’ Court heard.

In an impact statement he told the court it had left his wife, who was sitting next to him ‘shocked’ and stressed out his three children.

He was visiting the mosque and nearby charity, the Muslim Welfare House with MP Diane Abbott and local councillor Richard Watts on March 3 to celebrate the annual Visit A Mosque day.

But when he was greeted by charity volunteers ten minutes after making a speech, he felt a sudden force against his head directed by an “angry and aggressive” Murphy.

In a victim impact statement, Mr Corbyn said the attack has forced him to consider increasing his security after it left his wife and three sons “stressed and worried.”

The statement, read to the court by Prosecutor Kevin Christie said: “I was very shocked and surprised when the assault occurred.

“It was completely unprovoked and threatening.

“My wife Laura was sat next to me is often stressed on my behalf and was in a state of shock in the days following this incident.

“Diane Abbott and Councillor Richard Watts witnessed it happened and were also very shocked by it.

“Since then I have had discussions with my office about my security.

“I feel these type of attacks drive a wedge between elected representatives and the people who elected them in the first place.

“We are now reviewing an increase in my security protection.

“My three sons became aware of what happened on social media and were very stressed by the assault.

“It’s painful to see my family be subjected to such stress because of my role and because of these attacks against me.”

Chief Judge Emma Arbuthnot told the court she will be considering a custodial sentence because “attacks against MPs must stop.”

She said: “I am thinking of a short custodial sentence.

“I am taking this very seriously.

“This was at a public event and attacks against MPs must stop.

“The message needs to get out that courts will not allow this to continue.

“It might seem a minor event but there are waves of impacts, particularly on family members.”

Mr Kristie told the court: “Mr Corbyn attended Finsbury Park mosque for Visit A Mosque day, which he does every year.

“After he gave a speech at the mosque he left with family members and colleagues to go to the Muslim Welfare House.

“It is a five to ten minute walk to the house and he stopped to greet and speak to people as they made their way.

“When he arrived he was greeted, made his way into the house and removed his shoes.

“He sat down in a side room. The atmosphere was friendly and everyone was in good spirits.

“As he was sat down next to his wife he felt a strike to the right side of his forehead and realised someone had reached over his shoulder and struck him.

“He heard a male voice shouting ‘respect the vote.’

“He was urged by those around him to get up and move out of the room. He realised he had been struck with an egg.

“The male was repeatedly shouting ‘respect the vote’ as he was restrained by staff.

“Mr Corbyn described his face was contorted with anger and he was acting in an aggressive manner.”

CCTV footage of the assault which lasted seconds was shown to the court.

Murphy, from Barnet, north London was found holding four eggs when he was searched at a police station.

But the 31-year-old, who pleaded guilty to assaulting Mr Corbyn, is of good character and has no previous convictions, the court heard.

Defending Malik Aldeiri said: “I don’t mean to use a pun but this has been over egged.

“Other victims will not want to feel less worthy just because other victims are well known.

“Members of Parliament, whether rightly or wrongly can be subjected to varying degrees of animosity.

“Mr Murphy is of good character and has no previous convictions or cautions.”

He added: “Mr Corbyn has not increased his security.”

Wearing black jeans and a dark jumper, a bearded Murphy looked blank as the Judge considered sending him to jail.

Several members of his family were sat in the court’s public gallery.

Murphy faces a charge of assaulting the Labour Party leader by beating.

He will be sentenced later today.