A man fined £800 after he filmed a pet dog giving Nazi salute set up a GoFundMe page to pay for his appeal – and has raised over £75,000. Mark Meechan was found guilty of a hate crime in communicating a video which was “grossly offensive”. Meechan, from Coatbridge, Scotland, taught his girlfriend’s pug to […] 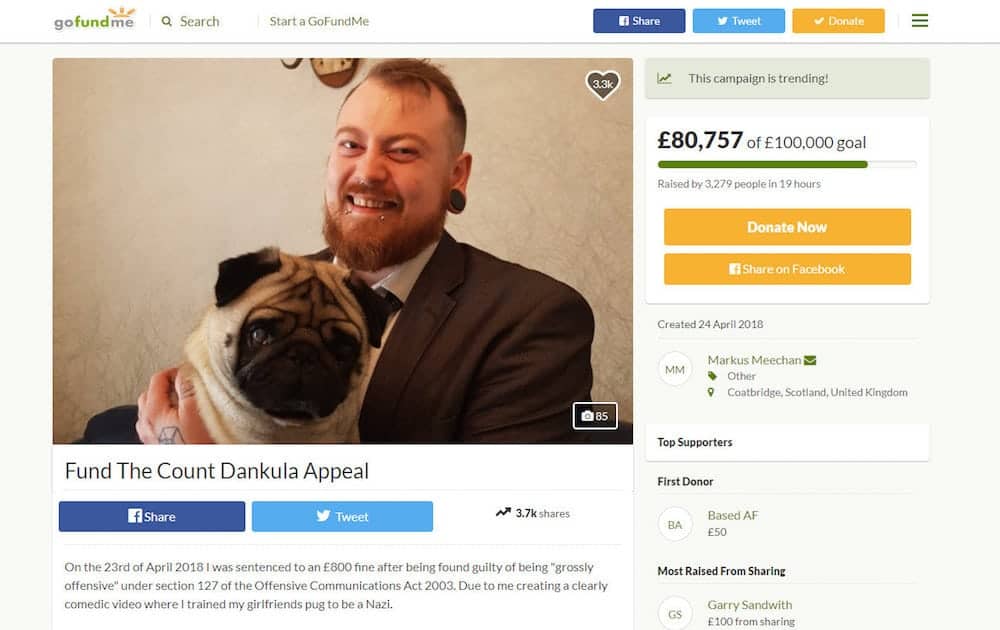 A man fined £800 after he filmed a pet dog giving Nazi salute set up a GoFundMe page to pay for his appeal – and has raised over £75,000.

Mark Meechan was found guilty of a hate crime in communicating a video which was “grossly offensive”.

Meechan, from Coatbridge, Scotland, taught his girlfriend’s pug to react to the words “gas the Jews”.

The 30-year-old was given six months to pay the fine.

He also set up uk.gofundme.com/fund-the-count-dankula-appeal called ‘Fund The Count Dankula Appeal’ to fund his challenge at the High Court.

On the video, Meechan said: “I am no criminal, I have committed no crime, I’ve done nothing wrong therefore I should not be punished.

“My form of protest is to refuse any punishment that the judge gives me. I owe the court 800 pounds. I’m not f***ing paying it.”

Meechan is aiming to raise £100,000 through the GoFundMe page to cover legal costs and has raised more than £75,000 in the first hours of the page being live.

Meechan said he was appealing because his conviction “will be used as an example to convict other people over the things they say and the jokes they make.”

He added: “Me having a criminal record and paying an £800 fine is an irrelevance. What matters is the precedent this case sets.

“Whenever anyone says something that might be unsavoury, the court gets to decide the context of it and can punish you for it. That’s Stalinist.

“We need to get the best that money can by so we can go to the High Court and nuke this precedent. This precedent needs to go.”