Warning: Though this review is spoiler free, the film’s set-up is referenced throughout. “It’s not overselling it to say that the future of the universe is at stake,” declares Benedict Cumberbatch’s Stephen Strange with a solemn tone. He’s referring, of course, to the coming of Thanos (Josh Brolin), a galactic warlord with an unhealthy violet […] 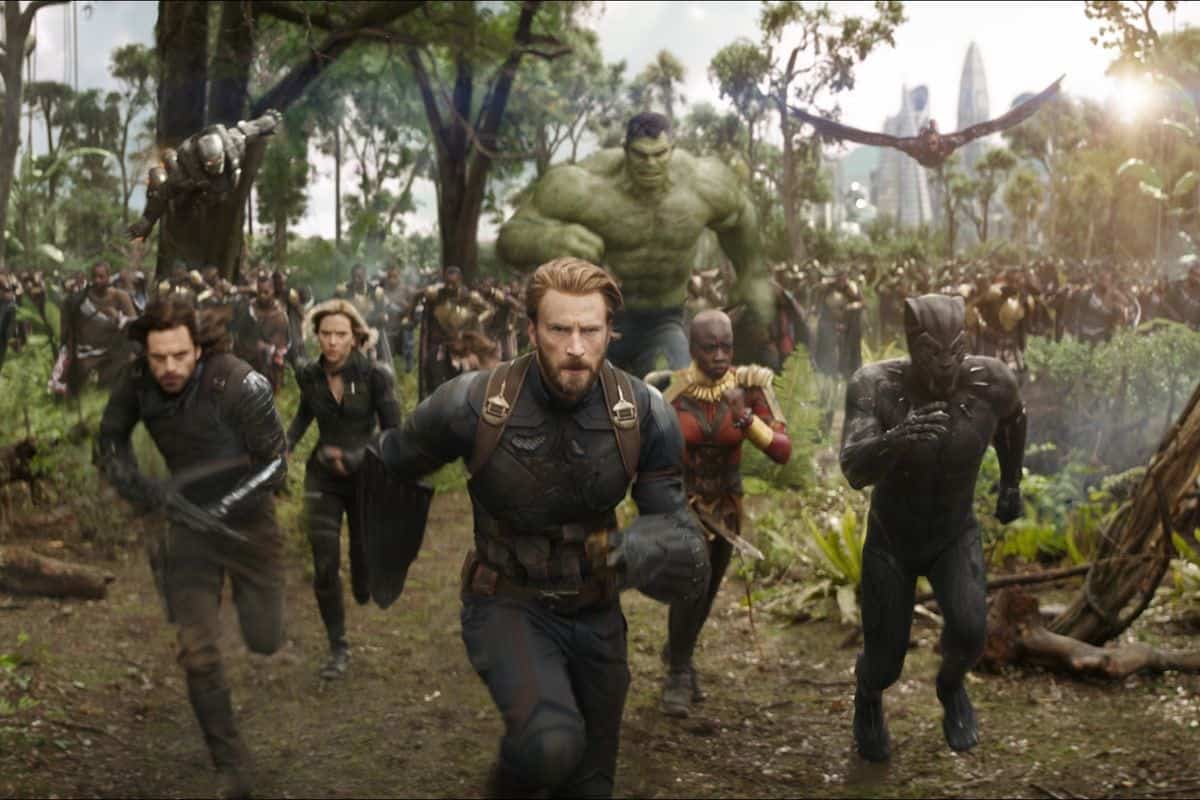 “It’s not overselling it to say that the future of the universe is at stake,” declares Benedict Cumberbatch’s Stephen Strange with a solemn tone. He’s referring, of course, to the coming of Thanos (Josh Brolin), a galactic warlord with an unhealthy violet complexion, towering height and intimidatingly chunky chin, who supposedly wishes to bring balance to the universe by destroying half of it.

The Sorcerer Supreme, however, could just as easily be talking about the need for this superhero smorgasbord to be a success. For after 10 years, and following 18 preceding instalments, Infinity War marks the beginning of the end for this decade-spanning movement in the Marvel Cinematic Universe, which will culminate next year with the as-yet-untitled Avengers 4; the stakes have never been higher, and at 2hrs and 40 minutes, the runtime has never been longer. 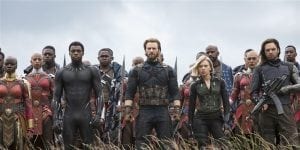 From the very start, returning directors Joe & Anthony Russo consciously adopt a more sombre air, the usual Marvel fanfare replaced with a brooding prelude as the studio’s beloved ident appears. The extended opening sequence goes on to set the bar high, jolting its audience out of the comfort zone that they’ve perhaps become too accustomed to. There’s an ambitiously compelling sense of finality to Infinity War that we’ve never witnessed in a Marvel film before, and a hint that not all of our beloved heroes will live to see the mission through to its endgame. “No resurrections this time,” grizzles Thanos, ruthlessly.

Long-time Marvel scribes Christopher Markus & Stephen McFeely have set themselves a herculean task trying to bring together the various strands left dangling after the culmination of the recent solo outings of Thor (Chris Hemsworth), Black Panther (Chadwick Boseman) and – most markedly – Captain America (Chris Evans); the last of which saw Earth’s Mightiest Heroes broken and disbanded following the climax of the Russo’s 2016 superhero-smackdown, Civil War. As such, much of Infinity War’s first half is dedicated to the bringing together of those many personalities, scattered not just across the globe, but the galaxy too.

Yet many of these meetings are frustratingly one-note, propelled solely by superhuman egoism – Robert Downy Jr.’s Iron Man self-consciously seeks to show that he’s as powerful as “space wizard” Strange, while Chris Pratt’s Star-Lord is immediately jealous of the awed expressions his fellow Guardians beam towards Hemsworth’s ruggedly gallant God of Thunder – and a gratuitous proclivity to re-explain the plot so as to ensure that everyone understands it.

For those that have forgotten, though, here’s a brief aide-mémoire: the Infinity Stones that have been discussed ad infinitum in previous episodes are scattered across the length and breadth of the cosmos. Including on Earth, where one can be found implanted in the head of The Vision (Paul Bettany), and another hidden inside a mystical pendant guarded by Doctor Strange at the Sanctum Sanctorum. Only by recovering all six of these enchanted nuggets and affixing them to his Infinity Gauntlet can Thanos ever hope to hold the power to inflict his will on all of reality, and as such guarding them is now The Avengers’ top priority… basically, without wishing to appear too cynical, it’s an even more fantastical version of the Harry Potter and the Deathly Hallows set-up.

So sluggish, and indeed so clunky is the script’s expositional approach that one found his interest deteriorating at an alarming rate during the opening hour. The narrative is overwhelmingly involved, and the Russo’s storytelling uncharacteristically lacking in confidence – their conviction for handling such sprawling material, proven so precisely in Civil War, seems to be missing, and compared to the poise displayed by Ryan Coogler and Taika Waititi respectfully in Black Panther and Thor: Ragnarok, Infinity War certainly lacks a sureness when establishing its story.

Brief salvos in New York and Edinburgh are both mind-numbingly chaotic and ear-shatteringly loud, to the point where you’re eventually relieved when we’re transported across the stratosphere and into the company of the Guardians of the Galaxy, who coincidentally make for a far more engaging group when their screen time is limited – particularly Bradley Cooper’s Rocket Racoon, who regularly steals the show here.

Humour has always been a fundamental MCU ingredient, and it is that deft handling of those lighter moments by writers, directors and actors alike that ensure our curiosity doesn’t fade entirely during the earlier stages. Indeed, the strength of the cast is what ultimately draws our attention away from the visibly distracting machinations within the plot. As the Russos move their pieces closer to their final positions, it draws out the characters and allows for a far greater dramatic heft, principally in the case of Zoe Saldana’s Gamora, daughter of Thanos, who carries the bulk of the emotional heavy lifting as she comes closer to the realisation that she may have to confront her despotic daddy. 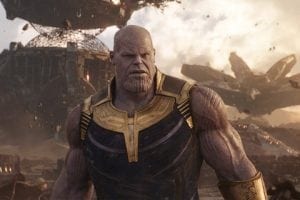 Lest we forget, the last time we had any real contact with the Mad Titan himself was during the first Guardians film, where he spent most of it grimacing while seated on what appeared to be a suspended space toilet. He failed to cut much of an intimidating presence then – a problem shared by many a Marvel villain throughout the series – but from the moment we first glimpse his looming figure, he oozes menace. Brolin’s body may be hidden beneath layers of (brilliantly rendered) CGI, but his penetrating stare and sonorous vocal pitch is intensely foreboding, particularly as it becomes clear that his plan is conditioned not simply by blind megalomania, but a complex reasoning that he unconditionally believes in, and is driven by. For the first time in the history of the MCU, we’re presented with a villain who seems like he may be unstoppable. And as we draw closer and closer to the dénouement, the Russos grip us by the fear that derives from that realisation.

“Perfectly balanced, as all things should be,” opines Brolin’s purple persecutor at one point. Infinity War may be too lopsided, specifically in its setup, to ever be considered perfect. As it moves towards its conclusion, however, it becomes clear that, especially for the fans, what we’re seeing are the beginnings of a possibly flawless emotional payoff for the years of dedication proffered. To reveal more would be to ruin a piece of barnstorming event cinema that, like many films, is best experienced – at least initially – while knowing as little as possible beforehand. Suffice to say that against my own expectations, I now await Avengers 4 with a heart-palpitating excitement.