“They are sending them through what are called the ‘filtration camps’ and then they are being relocated to very distant parts of Russia." 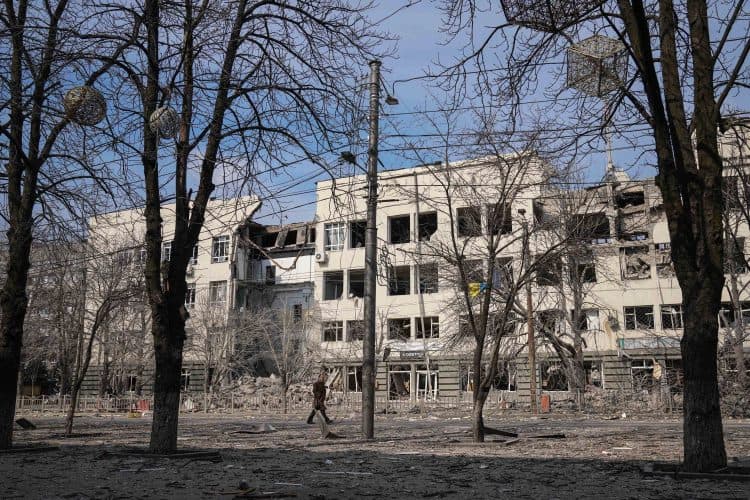 Liz Truss has condemned the “abduction and deportation” of Ukrainians from the besieged city of Mariupol, in a move that has been likened to Nazi Germany.

A Ukrainian MP claimed that her countrymen and women were being forced to relocate to “distant parts of Russia” to work in conditions akin to slave labour.

The Foreign Secretary said she was “appalled” by the reports and vowed for Russian President Vladimir Putin to be “held to account” for his treatment of civilians during the invasion.

Mariupol is in the throes of a humanitarian emergency after being encircled by Russian troops, cut off from energy, food and water supplies and facing a relentless bombardment.

According to reports, the south-east coastal city is under fierce fighting and could potentially fall into Russian hands, with the Kremlin issuing an ultimatum for Ukrainian soldiers to put down their weapons by the early hours of Monday.

Russian news agency Tass cited a statement from Colonel-General Mikhail Mizintsev, head of the Russian national defence control centre, stating that Moscow forces would allow residents to escape their battered dwellings if the request to lay down arms was complied with.

Tass said Mariupol had been given until 5am to respond, but Ukraine rejected the offer.

The port’s capture would mark a rare advance in the face of fierce Ukrainian resistance that has dashed Russia’s hopes for a quick victory, with fighting having lasted more than three weeks.

On Sunday, city authorities said a bomb destroyed an art school where 400 people had taken shelter, with rescuers searching for people possibly trapped under the rubble.

Only days before the shelling, there was a separate attack on a theatre in the city where more than 1,000 people were said to have been bunkered.

Ms Truss tweeted: “I am appalled by Russian atrocities in Mariupol, including attacks on schools sheltering civilians and the abduction and deportation of Ukrainians.

“Putin is resorting to desperate measures as he is not achieving his objectives.

“Putin and his regime will be held to account.”

The reports that thousands of Mariupol’s residents have been abducted remains unverified, but Ukrainian MP Inna Sovsun said that, according to information being shared by the port’s mayor, citizens were effectively being “relocated” by Moscow.

Speaking to Times Radio, she said Russia was following “the logic of Nazi Germany”.

“From what we know from the city mayor and the city council, is they are taking Ukrainian citizens,” said the politician.

“They are sending them through what are called the ‘filtration camps’ and then they are being relocated to very distant parts of Russia, where they are being forced to sign papers (saying) that they will stay in that area for two or three years and they will work for free in those areas.”

Ms Sovsun agreed when it was put to her that what she was describing was “effectively slave labour”.

Boris Johnson told the Ukrainian leader the UK was “committed to stepping up military, economic and diplomatic support” in a bid to bring about an end to the war.

The British leader asked Mr Zelensky what the Ukrainian military required in the struggle against Russia’s incursion before vowing to “advance” Kyiv’s interests at Nato and G7 meetings planned for this week.

Mr Johnson is expected to travel to Brussels, where he will hold talks on Thursday with US President Joe Biden and other allies about the Ukraine crisis.

Related: Ukraine journalist reveals why she is staying home – and it’s heartbreaking