Liz Truss has been announced as PM and is she already about to break law?

Liz Truss was elected Prime Minister after securing 0.17% of the British vote, taking over from outgoing Boris Johnson. 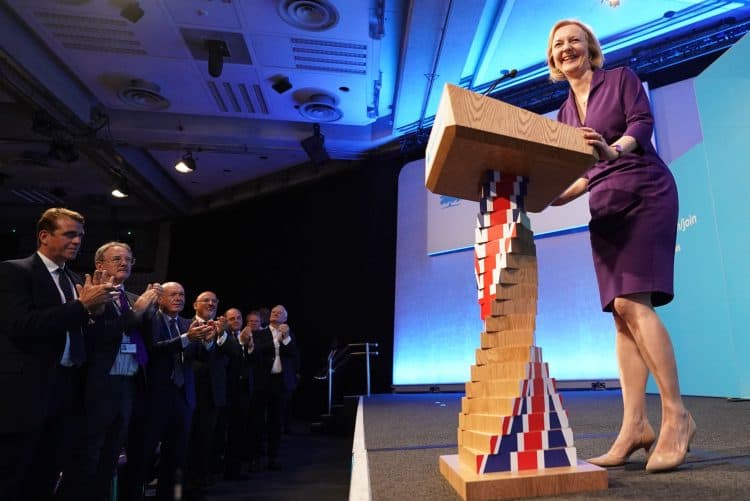 Liz Truss has won a smaller share of the Tory membership vote than any of her predecessors as Conservative party leader.

She picked up 57% of the valid votes cast, compared with 43% for Rishi Sunak.

Ms Truss also fell short of the total secured by Iain Duncan Smith in 2001, who picked up 61% of votes versus Ken Clarke’s 39%.

Is she going to break the law?

So what is she going to do as PM?

Well, the Best for Britain campaign group shared a troubling tweet with a message from their CEO Naomi Smith.

The thorny subject of Brexit was the issue she raised, writing: “The first act of Truss’ leadership cannot be a flagrant breach of international agreements. All MPs and Peers must unite to oppose the Bill. Britain’s global reputation depends on it.”

However, Truss can achieve a “sensible compromise” on the Northern Ireland Protocol if she softens her approach on the contentious post-Brexit trading arrangements, an Irish minister has said.

Foreign Affairs Minister Simon Coveney said political leaders in Dublin and Brussels are hopeful Ms Truss will adopt a less strident stance on the protocol if, as expected, she becomes the new UK prime minister.

As foreign secretary, Ms Truss angered the EU by tabling domestic legislation at Westminster that would empower ministers to unilaterally scrap the arrangements that have created checks on goods moving from Great Britain to Northern Ireland.

The European Commission has insisted such a move would breach international law.

During the Tory leadership campaign there has also been speculation that she may move to suspend the protocol when she enters No 10 – by triggering a mechanism called Article 16.

Many unionists are vehemently opposed to the protocol, claiming the Brexit checks on goods moving across the Irish Sea are undermining the region’s place within the UK.