The reason why a lightning channel is 'reused' is explained after a radio telescope was used to study the development of lightning flashes in unprecedented detail. 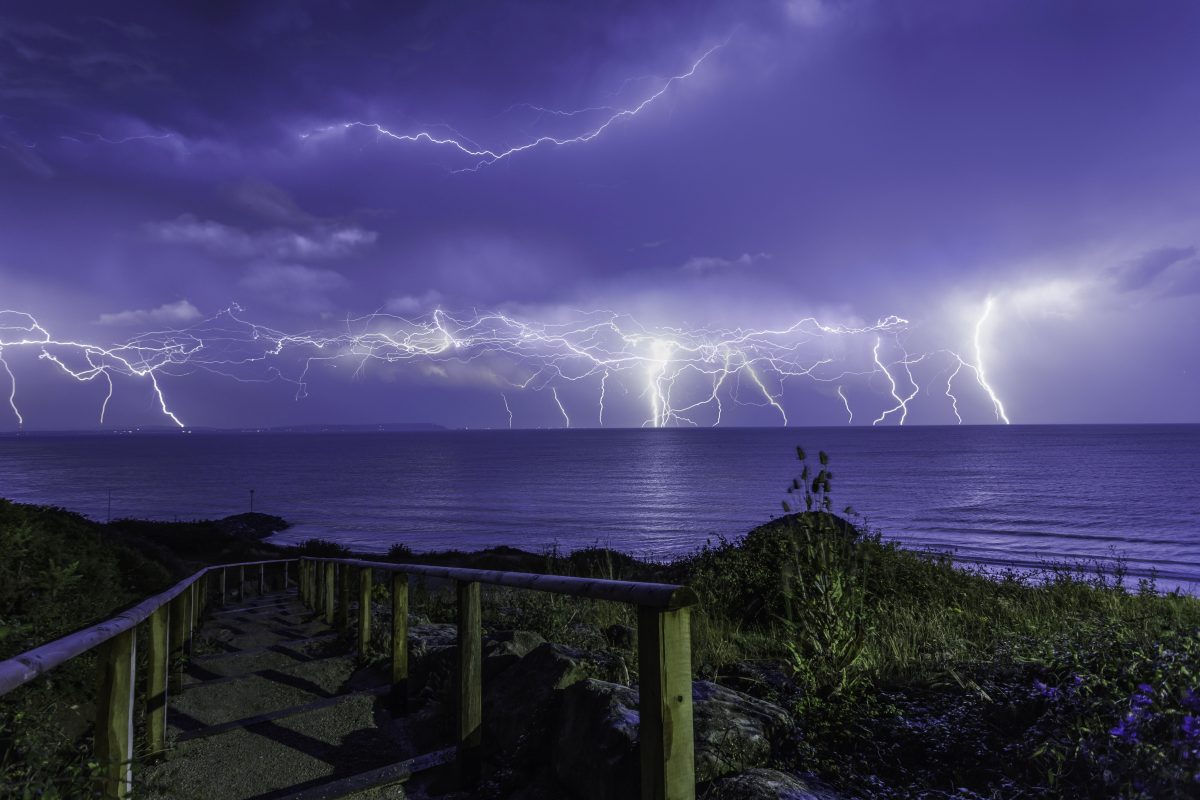 The expression commonly used to dismiss an unlikely event is wide of the mark, say scientists.

This is because the bolts that create a bright flash don’t come out of the blue but along ‘channels’ that are reused.

The finding is based on data from a Dutch radio telescope called LOFAR (Low Frequency Array) that has analysed the weather phenomenon in more detail than ever before.

It comprises thousands of antennas spread across northern Europe – and can observe the structure of lightning with unprecedented spatial resolution.

This identified ‘needles’ – structural features up to 100 metres in length – that extend perpendicularly from initially positively charged lightning channels.

A lightning flash is a giant electrical discharge. But the negative charges inside a thundercloud are not discharged all in a single flash.

They are stored inside the needles through which a negative charge may cause a repeated discharge to the ground.

The results published in Nature clearly show the occurrence of a break in the discharge channel at a location where needles are formed.

These appear to discharge negative charges from the main channel, which subsequently re-enter the cloud.

The reduction of charges in the channel causes the break. However, once the charge in the cloud becomes high enough again, the flow through the channel is restored, leading to a second discharge of lightning.

By this mechanism, lightning will strike in the same area repeatedly.

Professor Olaf Scholten, a physicist at Groningen University in The Netherlands, said:
“This finding is in sharp contrast to the present picture, in which the charge flows along plasma channels directly from one part of the cloud to another, or to the ground.

The reason why the needles have never been seen before lies in the ‘supreme capabilities’ of LOFAR.

First author Dr Brian Hare, a member of Prof Scholten’s lab, said: “These needles can have a length of 100 metres and a diameter of less than five metres – and are too small and too short-lived for other lightning detection systems.”

LOFAR’S antennas are connected with a central computer through fibre-optic cables, which means they can operate as a single entity.

The study published in Nature used only the Dutch LOFAR stations and analysed raw time-traces – accurate to one nanosecond as measured in the 30-80 MHz band.

Dr Hare said: “These data allow us to detect lightning propagation at a scale where, for the first time, we can distinguish the primary processes.

“Furthermore, the use of radio waves allows us to look inside the thundercloud, where most of the lightning resides.”

Parts of the cloud become positively charged and others negatively. When this charge separation is large enough a violent discharge happens – which we know as lightning.

Such a discharge starts with a plasma, a small area of ionised air hot enough to be electrically conductive.

This small area grows into a forked plasma channel that can reach lengths of several kilometres.

The positive tips of the plasma channel collect negative charges from the cloud, which pass through the channel to the negative tip, where the charge is discharged.

It was already known a large amount of VHF emissions is produced at the growing tips of the negative channels. The positive ones occur along the channel – not the tip.

The scientists developed a new algorithm for LOFAR data, allowing them to visualise the VHF radio emissions from two lightning flashes.

The antenna array and the very precise time stamp on all the data allowed them to pinpoint the emission sources with unprecedented resolution.

Prof Scholten said: “Close to the core area of LOFAR, where the antenna density is highest, the spatial accuracy was about one metre.”

Furthermore, the data obtained was capable of localising 10 times more VHF sources than other three-dimensional imaging systems, with a temporal resolution in the range of nanoseconds.

This resulted in a high-resolution 3D image of the lightning discharge.

Prof Scholten: “The VHF emissions along the positive channel are due to rather regularly repeated discharges along previously formed side channels, the needles.

“These needles appear to drain the charges in a pulsed manner.”