The Lib Dems said the paper, which is meant to present how poorer areas in the UK will have better lives, is "something cobbled together in a rush". 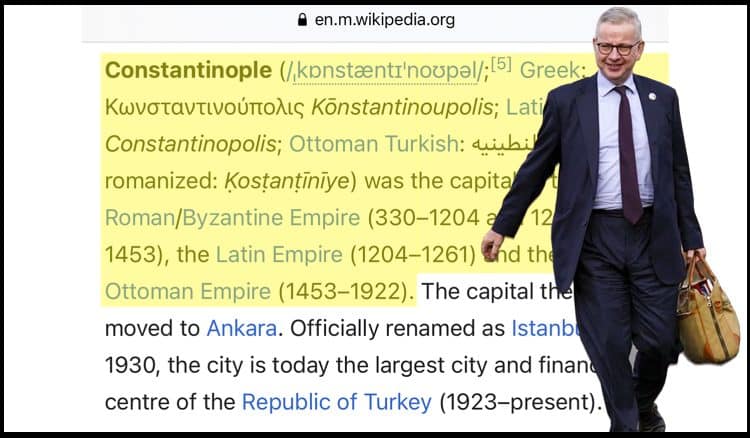 Michael Gove has sparked reactions after his ‘levelling-up’ plan seemed to have been partly copied from Wikipedia.

The strategy plan published this week had big paragraphs of rambling, with entire pages talking about the history of Rome, renaissance Europe and the past of Palestinian city Jericho.

Another part of the report appears to plagiarise Wikipedia’s list of ‘largest cities throughout history’.

But it’s not just about seemingly copying from the internet – the paragraph about Jericho has been accidentally repeated twice on the same page.

And eight out of 12 targets mentioned in the report are the same as those listed in former prime minister Theresa May’s industrial plan. Hers was launched four years ago and then scrapped by the government.

The plan is meant to improve the lives of people in poorer areas of the UK, but it doesn’t comprehensively present the strategy which would be followed or any new funding to make up for the current government’s cuts.

Labour criticised the report’s quality, labelling it as “repackaged, rehashed and recycled”.

And Lib Dem communities spokesperson Tim Farron told The Independent the paper reads like “something which had been cobbled together in a rush”, which doesn’t mention “rural communities which have been long forgotten by this government.”

“So it’s not at all surprising to see entire sections lifted from Wikipedia,” he said.

He added: “The Conservatives can’t even muster up the effort to properly invest in some of our most deprived regions, so anything beyond a copy and paste job would have been surpassing expectations.

“But as ever, this government can’t even meet the low bar they have set of themselves. Their hollow promises to families facing a cost of living crisis aren’t worth the paper they’re printed on.”

This week, an important think tank warned that the Tories’ promise to level up the UK threatens the country’s poorest people by making places central to their strategy – not poverty itself.

According to an analysis by the Institute for Fiscal Studies, some of Britain’s poorest live in some of the wealthiest areas, which means the focus should go beyond creating opportunities in hard-hit areas.

“It is really important to remember in all this that, while high paid jobs are unevenly spread, low paid jobs, and indeed poverty, are not,” said Paul Johnson, director of the IFS.

Related: Woman who lived in the UK for most of her life is refused British citizenship