The campaign group said it was bringing the Met the evidence it needs to prosecute government officials and their guests. 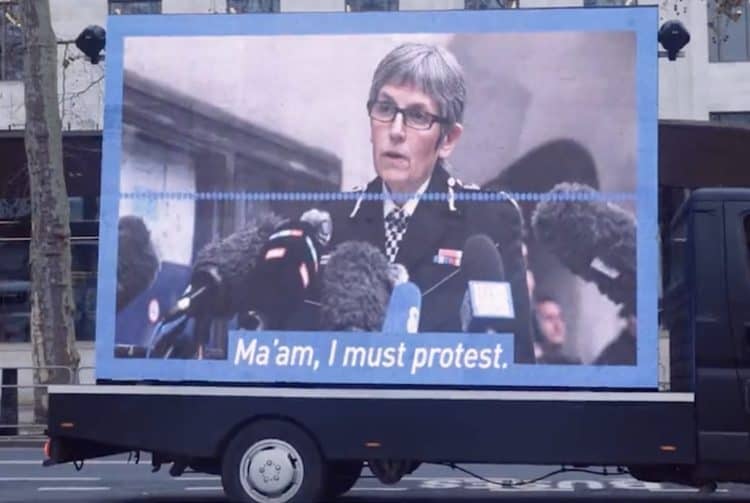 A new video has hit out at the Metropolitan Police for declaring they would not be investigating allegations of a Downing Street Christmas party last year.

In the footage, played outside Scotland Yard, Led By Donkeys claimed it was bringing the Met the evidence it needs to prosecute government officials and their guests.

It comes after police explained their decision to not hold an inquiry by saying that there is “an absence of evidence” – but the campaign group argued “the whole purpose of a police inquiry is to gather evidence”.

The video started by quoting the law from December 2020, which said no one was allowed to participate in a gathering in a Tier 3 area, consisting of two or more people, in any indoor space. It then also showed government guidance prohibiting work Christmas parties, “where that is a primarily social activity”.

Led By Donkeys then reminded the Met Police of the time they shut down a wedding a day before the Downing Street event, telling the public mixing indoors was not allowed, and of their current prosecution of people allegedly attending a party in Ilford on the same night as No 10 staff allegedly enjoyed a Christmas bash.

“Nobody denies an event took place at 10 Downing Street. The issue is a simple one. Was it – as No 10 claims – a work meeting, or was it a party?,” the video asks.

The group then presented the evidence: “It’s now been established that invitations were sent out by the press team three weeks before the event and that invitees included people who don’t work in Downing Street. The invitation said food and wine would be served and there would be an exchange of gifts.

“Some people wore Christmas jumpers to the event, while others brought Secret Santa presents. According to one person who was there – you might call them a ‘witness’ – quote: ‘Everyone was packed shoulder to shoulder. If it looks like a party, sounds like a party, stinks of booze and goes on until 2am, it’s a f***ing party.”

It added: “That is no work meeting. And of course even Downing Street staff called the event a party.

“We know this because four days later they held a mock press conference, footage of which has now been leaked, where they explicitly described it as a party, accepted it would be controversial because it was held during lockdown and discussed ways to present it to the public as a “business meeting”.

Led By Donkeys also said that people attending the party, including those who did not work at Downing Street, would have given their names to a Met Police officer upon entering the premises – suggesting that should give police some of the evidence it needs.

But it concluded: “Scotland Yard is refusing to investigate. Why? When did we stop caring about truth and accountability?

“The police serve the public. We do so without fear or favour and we do so to the letter of the law, the letter. Our leaders partied while families were separated and our citizens died in their thousands. Jesus, Mary and Joseph led by the wee donkey, who exactly does the Metropolitan police work for, ma’am? Our citizens or Boris Johson?”