By Joe Mellor, Deputy Editor A massive leak of documents could see the end of the TTIP trade deal, which includes provisions to allow American corporations to help change European law and also weaken consumer protections. Campaigners hope the leaked pages will bring an end to the TTIP (Transatlantic Trade and Investment Partnership) which has […] 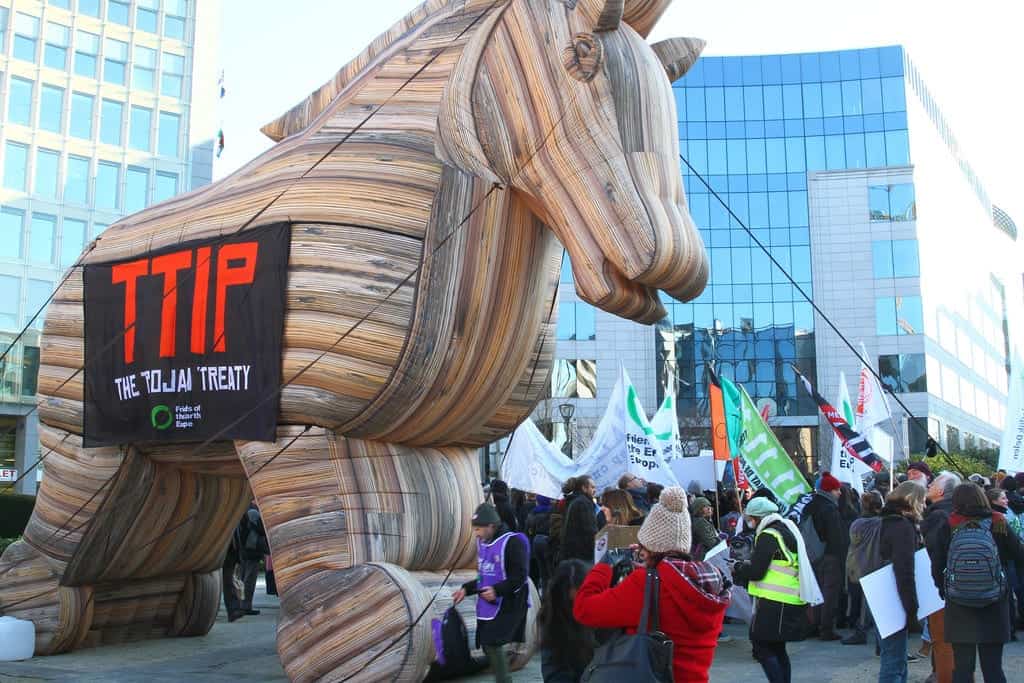 A massive leak of documents could see the end of the TTIP trade deal, which includes provisions to allow American corporations to help change European law and also weaken consumer protections.

Campaigners hope the leaked pages will bring an end to the TTIP (Transatlantic Trade and Investment Partnership) which has seen strong resistance from both sides of the Atlantic. Many opponents see it as a chance for big business to override the laws of the sovereign states.

The leak reveals that the relationship between Europe and America are weaker than had been thought. There are also huge disagreement about the core provisions.

TTIP talks have been held in virtually secrecy, and most information that is known in public has come out from unofficial leaks, which has already worried many who see the deal has fundamentally un-democratic.

The new pages, leaked by Greenpeace, represent the first major look at how the highly confidential talks are progressing.

The leaks could be enough to destabilise the deal completely, according to campaigners who have claimed that the agreement couldn’t survive the leaks.

“Now that we can see the actual texts, the EU negotiators have nowhere left to hide,” John Hilary, the executive director of War on Want, said. “The gloves are off, and they know they are in for a proper fight.”

They indicate that the US is looking strongly to change regulation in Europe to lessen the protections on the environment, consumer rights and other positions that the EU affords to its citizens.

Representatives for each side appear to have found that they have run into “irreconcilable” differences that could undermine the signing of the landmark and highly controversial trade deal, campaigners say.

Guy Taylor, trade campaigner at Global Justice Now said: “TTIP is being cooked up behind closed doors because when ordinary people find out about the threat it poses to democracy and consumer protections, they are of course opposed to it.

“It’s no secret that the negotiations have been on increasingly shaky ground. Millions of people across Europe have signed petitions against TTIP, and hundreds of thousands have taken to the streets to call for an end to the negotiations.

“These leaks should be seen as another nail in the coffin of a toxic trade deal that corporate power is unsuccessfully trying to impose on ordinary people and our democracies.”

Kevin Smith, a spokesperson for Global Justice Now, said: “However ‘on the ropes’ that TTIP might seem to be, it’s critical that concerned citizens and campaign groups don’t rest on their laurels, but instead use this moment to escalate their opposition and make sure that this outrageous corporate power grab is seen off once and for all.”