Kylie Jenner inadvertently wiped a billion pounds off Snapchat’s stock market value yesterday after she tweeted that she doesn’t use the app anymore. The reality TV star is followed by 24.5 million people on Twitter, and added to the unease around Snapchat’s re-design when she tweeted: “sooo does anyone else not open Snapchat anymore? Or […] 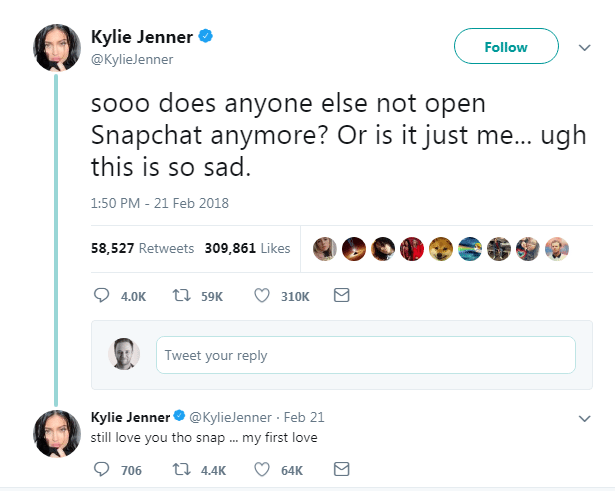 Kylie Jenner inadvertently wiped a billion pounds off Snapchat’s stock market value yesterday after she tweeted that she doesn’t use the app anymore.

The reality TV star is followed by 24.5 million people on Twitter, and added to the unease around Snapchat’s re-design when she tweeted: “sooo does anyone else not open Snapchat anymore? Or is it just me… ugh this is so sad.”

A petition on Change.org has already been signed by 1.2 million people calling for Snap Inc. to change the app back to how it functioned before the new 2018 update.

After dropping almost eight per cent, shares in Snap closed six per cent down on Wall Street, and are now back near the $17 price at which the shares were listed when the company floated on the stock market in March of last year.

Although Jenner later tweeted a follow-up saying “still love you tho snap… my first love”, she couldn’t rescue the unease in the market.

Laith Khalaf, senior analyst at Hargreaves Lansdown, told the BBC: “Part of the problem is Snap isn’t profitable at the moment, so there’s a fair amount of hope for the future already baked into the share price, making it particularly vulnerable to swings in sentiment.

“Snap’s future rests on building user numbers, so anything which could undermine that journey is naturally going to unsettle investors.”