Police said the situation is ‘contained at this time and there is no danger to the general public’. 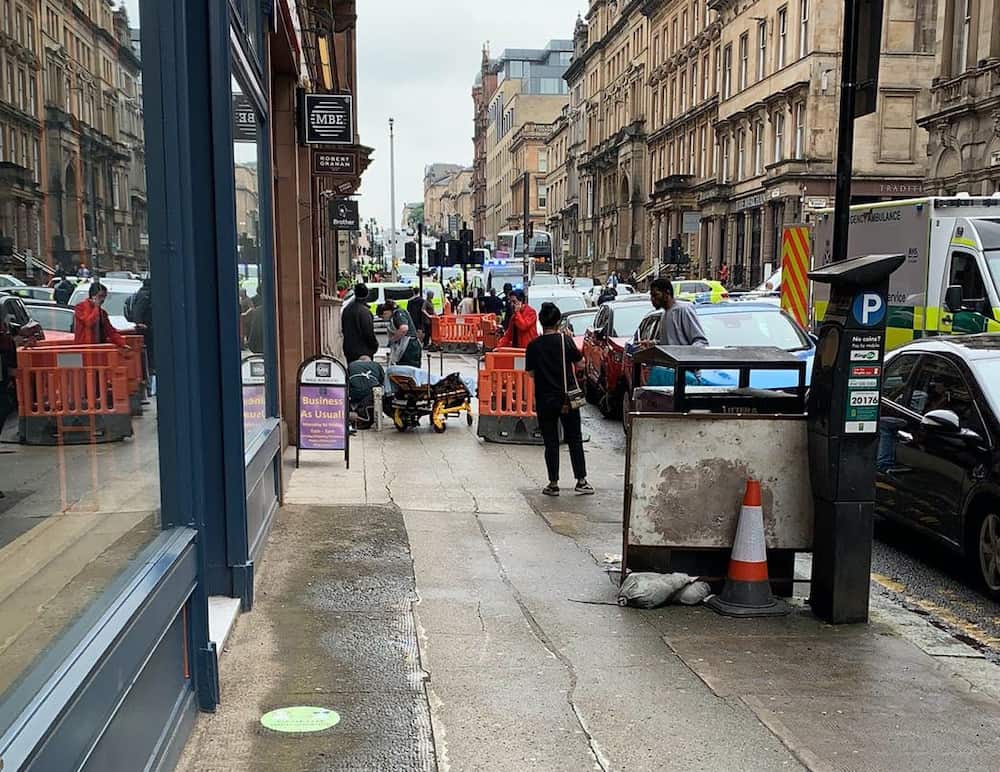 Photo taken with permission from the Twitter feed of @Milroy1717 of emergency services presence in West George Street, Glasgow, as a serious police incident has closed roads in the city centre.

The Scottish Police Federation (SPF) has said an officer has been stabbed during a major incident in Glasgow.

BBC reporter Catriona Renton is on the scene and tweeted: ‘Understood three dead in a stairwell of hotel. Had been stabbed. Police shot suspect’ with the corporation reporting the male knifeman was shot dead.

Footage from the scene showed armed units running down the road and witnesses saw ‘bloodied’ people being taken from the Park Inn hotel on stretchers. The hotel has been used temporary homeless accommodation during the coronavirus crisis.

The organisation, which represents rank and file police officers, said the family of the officer has been informed.

Police Scotland said there is no danger to the public, with officers in attendance in West George Street in the city centre on Friday afternoon.

Images on social media appear to show armed police entering a building and a large number of emergency vehicles outside.

The SPF tweeted: “We are aware of reports a police officer has been stabbed in an incident in #Glasgow city centre.

“Our officials are in attendance to provide all necessary support. Please allow our collages the space to do their jobs. Further updates will be provided when we are able to do so.

In a statement on Twitter, police said the incident is “contained” and there is no danger to the general public.

“The street is currently closed off and the public are asked to avoid the area at present.

“The situation is contained at this time and there is no danger to the general public.”

Witness Craig Milroy, who saw the aftermath of the incident from an office building nearby, said he had seen four people taken away in ambulances.

He told the PA news agency: “I saw a man lying on the ground, of African descent, with no shoes on. He was on the ground with someone holding his side – I don’t know if it was a bullet wound, a stab wound, or what it was.”

Mr Milroy said the man was one of the four taken away by medics and believed him to be a victim of an attack.

He added: “After that we saw commotion, ambulances further up and we saw armed police all running into the hotel next to the Society Room.

“We were still standing outside, after that the police all came down, the riot police and triage team told us to go back in and lock the door.”

A traffic information bulletin issued by Glasgow City Council said a number of roads in the city centre had been closed.