The government encouraged fishermen to back Brexit and then sold fishermen down the road, first mate Charlie Waddy has said. 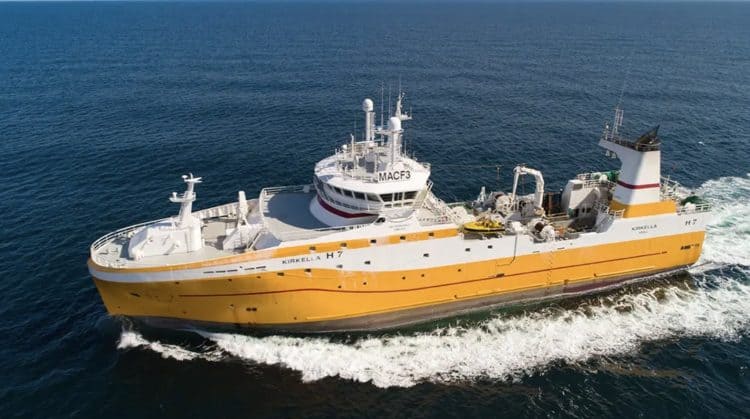 The owners of the UK’s biggest trawler have said the vessel may have to be sold or moved abroad because of a post-Brexit deal, it has emerged.

The Kirkella, which used to catch eight per cent of the fish sold in UK fish and chips shops, has been standing idle since December last year, when Britain lost its right to fish in Norwegian waters after Brexit.

UK Fisheries, who operate the fishing boat, said the new deal with Norway, which came into effect this month, leaves fishermen with only one week’s work.

It comes after the 30 Kirkella staff have been unable to work for a whole year because of ongoing post-Brexit negotiations, as they were paid per trip.

But the government insisted the deal will strike a “strong balance” for British and Norwegian fleets, and allow them to fish up to 30,000 tonnes of cod, haddock and hake.

‘Sold down the road’

First mate Charlie Waddy told the BBC the crew has been “sold down the road”.

Waddy also said he felt the government encouraged fishermen to back Brexit, and expressed concern about the industry’s future.

She said: “I feel sorry for them because their life has been fishing, since they left school all they wanted to do was come fishing and they love the job.

“The mood in the crew at the moment is that they’re blaming the government because they’ve sold them down the road.

“But this industry in Hull, they’ve sold it down the road, there is nothing for them now.”

UK Fisheries CEO Jane Sandell said the deal with Norway left the group, which supplied up to 12 per cent of fish sold in UK fish and chips shops, “more than disappointed”.

Sandell added the new deal meant only one week’s worth of work for the crew.

“We’re absolutely devastated for the crew. The government was fully aware of what we need to operate a viable business and frankly these kind words were just platitudes,” she said.

But the government insisted the new deal would let fishermen catch 1,500 more tonnes of cod in the arctic compared with 2021, with minister Victoria Prentis saying the agreement will benefit both the industry and “the protection of the marine environment”.

Sandell later told the Yorkshire Post: “We’re seriously going to have to think about the way ahead, about possibly selling, downsizing or the shareholders might decide to take the investment out of the UK. “It’s the hardest commercial decision we will have to make – it’s been forced on us.”