The giant projection likened the PM’s response to coronavirus to Neville Chamberlain’s controversial policy of appeasement. 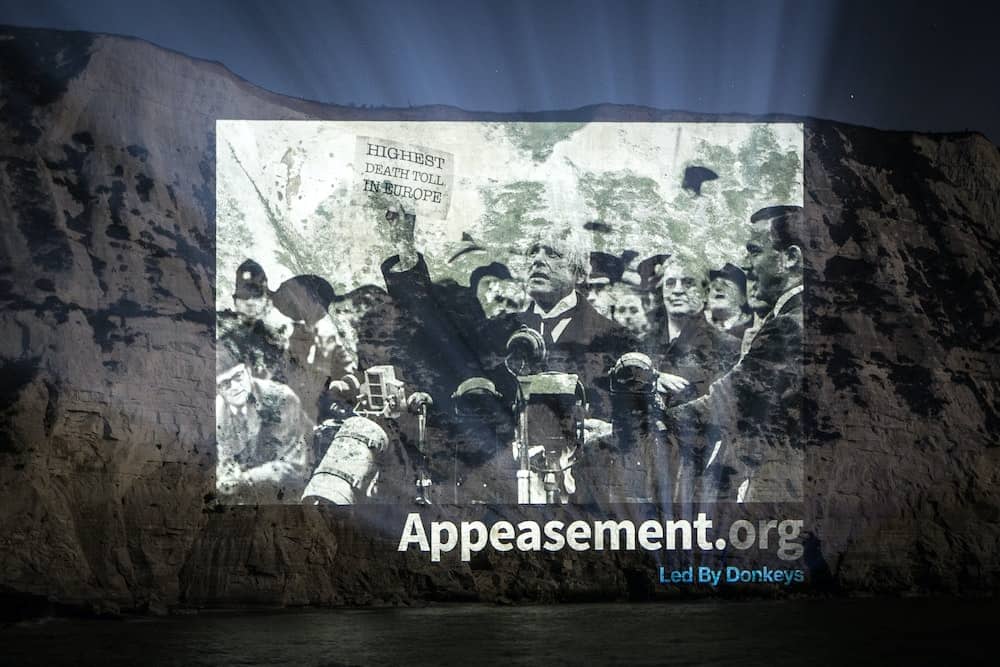 Boris Johnson’s response to the coronavirus crisis has been compared to Neville Chamberlain’s “peace for our time” moment, in a giant projection beamed on to the White Cliffs of Dover.

The Kent landmark was lit up with a mock-up of the Prime Minister holding a scrap of paper saying “Highest death toll in Europe”.

The stunt was the brainchild of Led By Donkeys, a group of activists famed for their giant billboards of politicians’ tweets.

The group said the black and white creation is a comment on the Government’s “profound failure” and compares Mr Johnson’s conduct to Chamberlain’s appeasement policy in the lead-up to the Second World War.

The huge video includes clips of Mr Johnson speaking early in the coronavirus outbreak, including: “Basically we’re saying wash your hands and business as usual.”

It was projected on to the famous coastline overnight on Wednesday-Thursday, ahead of events marking VE Day on Friday.

Speaking to the PA news agency, a spokesman for Led By Donkeys said: “We held back from doing it for a long time, I suppose in a sense we were giving Johnson the benefit of the doubt.

“But as we started working on a timeline of Government action on the coronavirus it became clear that this was an absolutely profound failure.”

The video, posted on Twitter on Thursday morning, points viewers to appeasement.org, where the group has put together a timeline of the coronavirus crisis.

The timeline allows people to make up their own minds about the Government’s performance at a time when a lot of information is circulating, the group said.

The spokesman continued: “Obviously we accept that not everyone is going to agree with us, of course they won’t, but nevertheless over time I think people will come to accept that Johnson’s Government failed really quite profoundly at the moment of maximum danger.

“Johnson has for his entire career both explicitly and less explicitly compared himself to Churchill, and when the moment came, the defining moment of his career, he failed and he acted in a way that was more resonant of Chamberlain than Churchill.”