The former Labour leader said the only thing he had done through his work was to highlight "a truth that was embarrassing to the US". 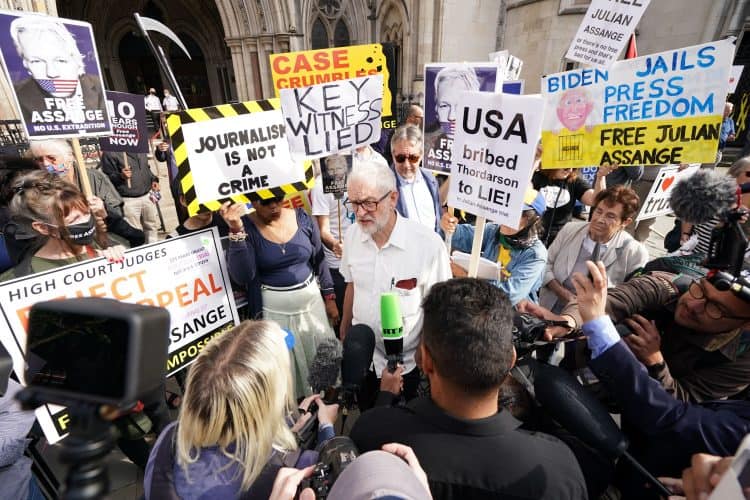 Jeremy Corbyn joined supporters of Julain Assange outside the High Court this morning.

The US government is appealing against a decision in January not to extradite the WikiLeaks founder to face espionage charges.

He is wanted onallegations of a conspiracy to obtain and disclose national defence information following the publication of hundreds of thousands of leaked documents relating to the Afghanistan and Iraq wars.

But aftera multi-week extradition hearing last year, District Judge Vanessa Baraitser ruled that Assange should not be sent to the US, citing a real risk of suicide.

“Wind their necks in”

Dozens of Assange supporters, including his partner Stella Moris, gathered outside the Royal Courts of Justice ahead of the hearing, chanting and waving signs.

Former Labour leader Jeremy Corbyn was also seen outside the central London building, telling supporters that the US government should “wind their necks in” and allow Assange to go free.

He described Assange as a reporter “in the tradition of fearless journalism” and insisted the only thing he had done through his work was to highlight “a truth that was embarrassing to the US”.

He was applauded by protesters who shouted “free Julian Assange” and “jail the war criminals” as uniformed police looked on.

Assange appeared at the hearing via video-link from Belmarsh Prison, wearing a dark face covering and a white shirt, with what appeared to be an untied burgundy tie draped around his neck.

In her ruling, Judge Baraitser found that “the procedures described by the US will not prevent Mr Assange from finding a way to commit suicide” if he was extradited.

Clair Dobbin QC, for the US, argued there is a “need for anxious scrutiny” of Assange’s reported mental health.

The barrister said part of the US government’s appeal will focus on the requirement in law that an individual must be “so ill” that they are unable to resist suicide for a decision to be taken not to prosecute – or in Assange’s case, extradite – them.

She told the court: “It really requires a mental illness of a type that the ability to resist suicide has been lost.

“Part of the appeal will be that Mr Assange did not have a mental illness that came close to being of that nature and degree.”

The barrister later said there was no issue about whether Assange was too unwell to take part in the extradition hearing itself and that he “played a very full part” in the proceedings.

In the US government’s written argument, she continued: “He has not made the sort of serious attempt on his life or have the history of serious self-harm seen in other cases.

“He has never previously suffered from the sort of mental health condition that deprived him of the ability to make rational choices.”

Ms Dobbin argued that the judge’s ruling used “a predictive assessment of Julian Assange’s risk of suicide” but that other experts said it was not possible to predict suicide risk on a long-term basis.

The barrister also told the court that the need for scrutiny is “substantially increased” given the background – including the “extraordinary lengths” Assange has already gone to in order to avoid extradition.

“He was willing to break the law and no cost was too great, both in terms of the cost of policing his being in the embassy and of course the cost to himself,” she said.

In the US government’s written case, Ms Dobbin said that £16 million of taxpayers’ money had been spent to “ensure that, when Mr Assange did leave the embassy, he was brought to justice”.

The barrister said that, according to the allegations against him in the US, Assange “orchestrated one of the largest thefts of data in history”.

She added: “If there was ever a case that called for a dispassionate, reliable, but above all impartial expert opinion, it was this one.”

The US authorities have also claimed that evidence from Assange’s psychiatric expert, Professor Michael Kopelman, should have been dismissed or had less weight attributed to it.

Ms Dobbin argued that the expert misled Judge Baraitser during the original extradition proceedings by “concealing” the fact that Assange had fathered two children during his time in the embassy until March 2020, when he “chose to deploy that information in support of his bail application”.

In her ruling, Judge Baraitser also said there was a “real risk” Assange would be locked up at the Administrative Maximum Facility (ADX) in Florence, Colorado, if convicted, which would lead to Assange’s mental health deteriorating.

However, the US has said it would consent to Assange being transferred to Australia to serve any prison sentence he may be given.

Edward Fitzgerald QC, for Assange, is due to present his arguments later on Wednesday.

The hearing in front of Lord Justice Holroyde and Mrs Justice Farbey will end on Wednesday, with a decision expected at a later date.