Solicitor Onasanya, who left prison on February 26 after serving less than four weeks for perverting the course of justice, made the plea in a bizarre video posted on her Twitter page 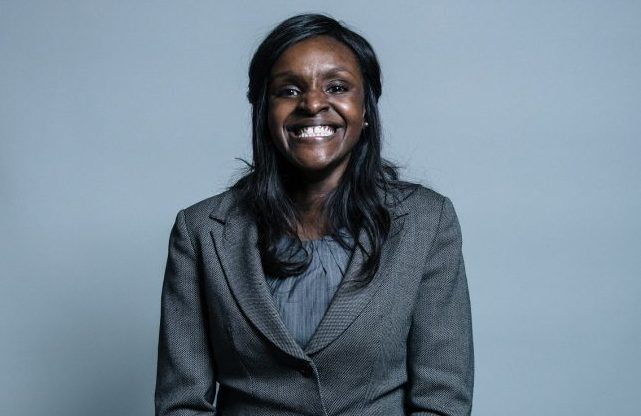 Disgraced MP Fiona Onasanya has pleaded with voters to let her keep her job as a petition is about to be launched that could see her ousted from her parliamentary seat.

Solicitor Onasanya, who left prison on February 26 after serving less than four weeks for perverting the course of justice, made the desperate plea in a video posted on her Twitter page.

The ex Labour politician was found guilty of the charge after claiming someone else was behind the wheel of her Nissan Micra when it was seen speeding near Peterborough, Cambs., on 24 July 2017.

The 35-year-old, who has to wear an electronic ankle tag, denied the charges but lost an appeal against her conviction earlier this month and has been expelled from her former party.

Despite numerous calls for her to give up her seat, she has retained her £77,000 salary and remained as an independent Member of Parliament for Peterborough.

Tomorrow (tue) Peterborough City Council will launch a recall petition which will trigger a by-election if 10 per cent of eligible voters sign it – or around 7,000 people.

In the video, Onasanysa sits in front of a background depicting the skyscraper-covered skyline of New York.

She says: “It has been my privilege and honour to serve you as your Member of Parliament, being your voice for change in the corridors of power.

“However, this has become somewhat overshadowed by the charge brought against me for perverting the course of justice.

“Throughout the last few months you would have seen news articles, television articles, and also read on social media about my case.

“And all of this time, I have not been able to share my side.

“But just like a coin has two sides, so does a story.

“And this is my time now to share with you, without media spin, what my side of the story is.

“From the outset I have maintained my innocence. I have not perverted the course of justice.

“I have not colluded with my brother. My defence was never put across in the media. At all times they always put forward the prosecution’s case.

“Now I have this opportunity, I would like to ask, people have asked for my resignation but what would you do if you knew you were innocent? Would you sit back and accept it?

“Would you accept the verdict knowing in your heart of hearts that you are innocent? Or would you fight to clear your name?

“I am telling you I am innocent, and will continue to pursue avenues to clear my name.

“If you wish for me to continue as your independent Member of Parliament, I am willing and able to do so, but the choice is now in your hands.

“I would like to say I have a deep gratitude to all who have offered prayers, support and love during this difficult period of time over the past few months, and also say to you all – thank you.

“I will continue to be your voice of change in Parliament for as long as you wish me to do so.

Peterborough City Council’s petition officer Gillian Beasley was told by Speaker of the House of Commons John Bercow on March 5 that Onasanya would face a recall petition.

It will begin tomorrow (tue) and run until May 1.

Eligble voters have already received letters about the petition and have been allocated to one of 10 signing stations.

If 10 per cent of the electorate – or 6,967 people – sign it, the MP will lose her seat and a by-election will be triggered.

The result will then be sent to the Speaker of the House of Commons on Wednesday May 1.

The cost to the region of running the recall petition is estimated at £500,000, which will be funded by the Government.