“Many of them are now considering returning to Ukraine due to their precarious situations in Europe,” said a caseworker at Wilson Solicitors. 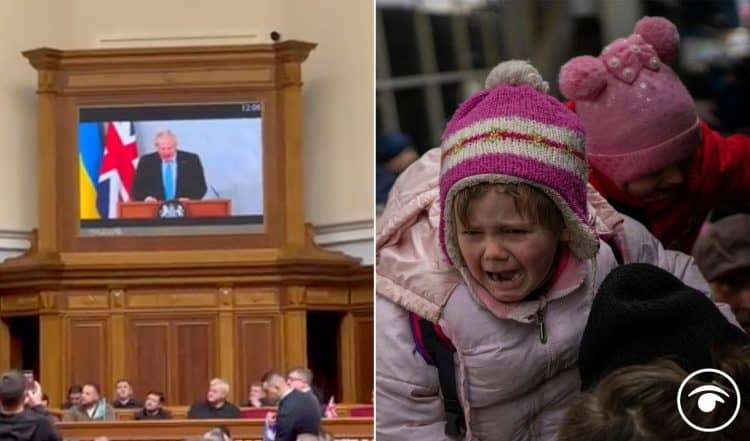 A Ukrainian MP has said Boris Johnson’s speech in their parliament gave them “hope we are not alone” but contested his description that the nation is experiencing its “finest hour”.

The Prime Minister was given a warm reception as he echoed the words of Winston Churchill in his videolink address to the Verkhovna Rada on Tuesday – describing Ukraine’s resistance against Vladimir Putin’s invasion as its “finest hour, that will be remembered and recounted for generations to come”.

Inna Sovsun, the deputy leader of the Holos Party, said Mr Johnson is “probably the biggest friend that Ukraine has right now” after attending the address with hundreds of her colleagues.

Responding to his “finest hour” statement, however, the 37-year-old told the PA news agency: “I don’t know if the definition of ‘finest’ is supposed to be something nice and beautiful – certainly it doesn’t feel like that.

“It will probably be a glorious time described in history textbooks (and) reading about them is probably nice but living through them is hell, frankly speaking.

“But what we definitely understand and what we agree is this is a historic moment… when the nation is being transformed and reborn as a different type of nation.

“If that is the definition of the finest hour that could be it – but again, living through that is not something you’ll want for your children.”

As the PM was making this speech the Government is facing legal action over “inordinate and unreasonable delays” in processing hundreds of visa applications made in March by Ukrainian refugees.

Would-be hosts have instructed lawyers on behalf of hundreds of refugees who have spent weeks waiting to come to the UK.

Lawyers are now preparing a class action on behalf of hundreds of Ukrainians who applied to travel to the UK weeks ago but whose cases have been stuck in a backlog, The Guardian has reported.

The newspaper said an immigration lawyer has been instructed to launch legal proceedings by advocacy groups Vigil for Visas and Taking Action Over the Homes for Ukraine Visa Delays.

The Guardian reports that legal action is also being prepared on behalf of lone children who have been unable to access foster placements set up for them in the UK because of visa delays.

A total of 86,100 visas have been issued as of April 27 under the Ukraine Family scheme and the Homes for Ukraine Sponsorship scheme, a Government spokesperson told the newspaper.

But, as of April 25, just 27,100 Ukrainians had arrived in the UK, according to figures from the Department for Levelling Up, Housing and Communities and the Home Office.

Anais Crane, a case worker at Wilsons Solicitors who is representing several unaccompanied Ukrainian children, said many are close to giving up hope after waiting for over a month for visas.

“Many of them are now considering returning to Ukraine due to their precarious situations in Europe,” she told The Guardian.

Kirsty McNeill, an executive director at Save the Children said: “Part of (the Government’s) argument for the bureaucracy and the slowness is that it is keeping people safe. But actually it’s a lack of pace that is endangering children more than anything.”