“Staff who’ve done so much during the pandemic are being treated as an afterthought while MPs head off on their holidays, and infections are rising, which means pressure is piling back on the whole health team once again." 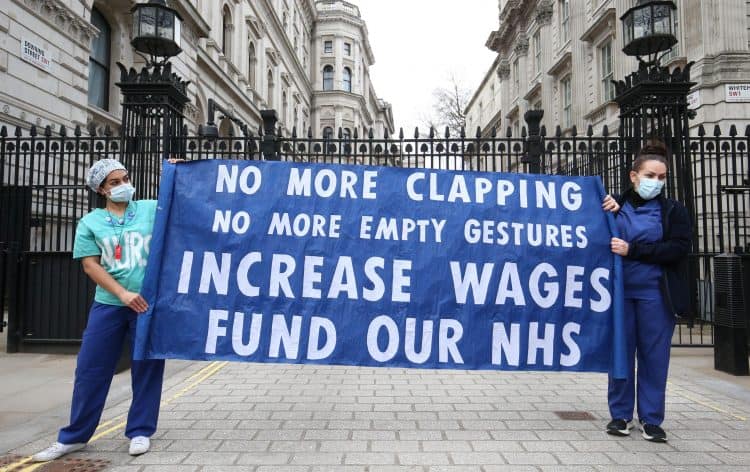 The Government is being warned that a long-awaited pay rise for NHS staff will be an “insult” if it is only a slight increase on the 1% the Prime Minister has said is all that can be afforded.

Health unions are stepping up pressure for an end to the delay in giving nurses and other staff a wage increase amid speculation that an announcement could be made in the next few days, possibly of a 3% increase.

The Government sparked anger by saying earlier this year it could only afford a 1% increase despite the extraordinary efforts of NHS staff to deal with the pandemic.

The NHS Pay Review Body made its recommendation weeks ago, leaving unions to question why a pay rise is still being delayed.

A Royal College of Nursing spokesman said: “Health Secretary Sajid Javid has a historic opportunity to show the Government values NHS staff and knows the importance of this pay rise to improving patient care.

“Nursing pay has fallen significantly in the last decade – by 15% in real terms. If the Government is serious about filling the tens of thousands of vacant nurse jobs then a significant pay rise is needed.

“It is as crucial to NHS recovery in the coming years as any other piece of investment.

“Low-level awards of a couple of percent would look timid and insult staff when the challenges they face have never been greater.”

Unite national officer for health Colenzo Jarrett-Thorpe said: “If the Pay Review Body is recommending a 3% pay rise, it is a small step forward on the insulting 1% the Government offered in March.

“However, this recommendation in no way recognises the 19% drop in real earnings that many NHS workers have endured in the last decade, nor the immense sacrifices that health staff have and are continuing to make as Covid infection rates rapidly rise again.

“It doesn’t match the 4% the Scottish Government offered to NHS workers backdated to December 2020.

“Three per cent will also do very little to staunch the escalating recruitment and retention crisis and free up resources to tackle the enormous backlog in non-Covid procedures, such as hip replacements.

Too little too late

“The Government needs to be much more generous than the anticipated PRB recommendation – the public will expect it to be.

“Health trade unions have been calling for an early and significant pay rise for more than a year, this announcement is too little and too late.”

A Department of Health and Social Care spokesperson said: “We are incredibly grateful to all our NHS staff. This year the Government has committed to providing NHS staff with a pay uplift, at a time when uplifts in the wider public sector have been paused.

“In doing so, the Government is acknowledging the extraordinary effort of NHS staff through the pandemic.

“We have received the reports from the independent Pay Review Bodies and are now carefully considering their recommendations before responding.”

“It’s 320 days since Unison wrote to Boris Johnson asking for a £2,000 increase for every NHS worker, but health workers in England, Wales and Northern Ireland still don’t know what they’ll get nearly 11 months on.

“Staff who’ve done so much during the pandemic are being treated as an afterthought while MPs head off on their holidays, and infections are rising, which means pressure is piling back on the whole health team once again.

“The least the Government can do is confirm now that staff will get a decent pay rise.”

Campaigners will hand in a petition to Downing Street on Tuesday, signed by 800,000 people, calling for a 15% pay rise for NHS workers.

Related: Farage announced new job but suggestions for role he deserved were better