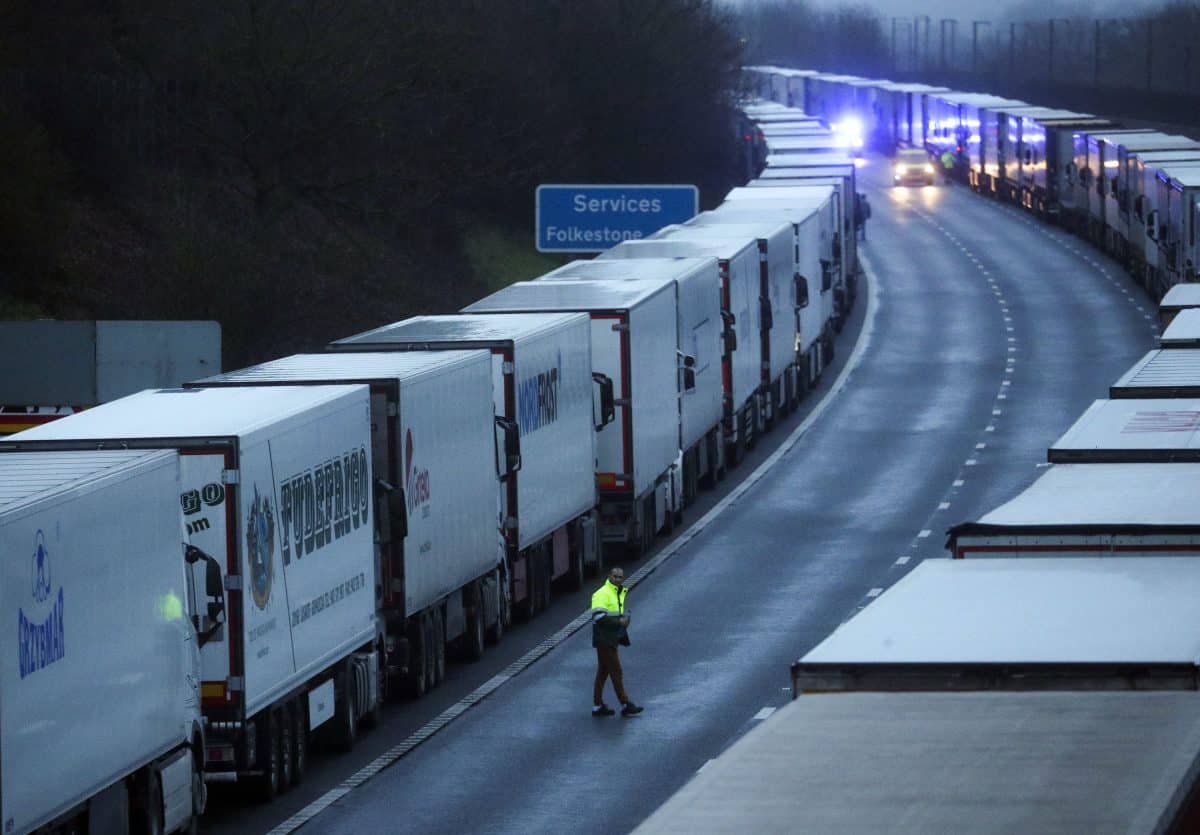 Prolonged restrictions on Dover trade could have “quite dramatic” ramifications for the UK, the port’s boss has warned. It comes as some of the lorries atuck in Kent have been slapped with parking fines.

Around 4,000 lorries had intended to leave the UK through Dover but arrivals at the port are being met with signs saying “French borders closed”.

France has placed a ban on hauliers crossing the English Channel with their cargo.

Around 950 lorries are currently parked on the M20 – far higher than Boris Johnson’s earlier statement saying there were 174 on the motorway.

New arrivals are being sent to Manston Airport, where there is space for 4,000 lorries, while around 200 other truckers have travelled to Ashford International Truckstop.

Emergency services, Kent County Council and charities have been handing out water and snacks to stranded drivers throughout today.

Talks with France on resuming full trade and transport across the Channel were continuing on Tuesday amid warnings that the border must be running again by Wednesday to avoid disruption to food supplies.

Home Secretary Priti Patel said the Government is “speaking constantly” with France to achieve a resolution “in both our interests” to get freight moving again.

Reports suggest a possible solution could be mass testing of HGV drivers across the Channel, while the BBC reported that plans to reopen the border will come into effect from Wednesday, citing French Europe Minister Clement Beaune.

He told BBC Radio 4’s Today programme: “There is a problem potentially directly after Christmas and that is really in fresh produce, so we’re talking here about things like salad, vegetables, fresh fruit, of which the vast majority come from Europe at this time.

Doug Bannister, chief executive of the Port of Dover, told the PA news agency: “With the news that was released around this new variant that’s in the UK now, clearly what that meant is that a whole lot of people around Europe had to start thinking carefully about this.

“But the one thing that we did see is, certainly during the first lockdown back in March and April, we did see that lorry drivers had been exempt.

“The hope is that governments are in dialogue right now to try and determine what protocols need to be put in place.”

The busy Kent port handles more than £120 billion in trade every year so any disruption could be keenly felt.

“And that’s the scale of the issue and this is trade that’s being denied from both British and European enterprise so a prolonged period will have quite a stark situation.

“Because of the importance of the Dover straits in handling critical goods such as food and other things like that I think it could become quite dramatic.”

As this chaos continues in Kent, causing panic buying and fears for future cross border trade, it has been reported that Lorry drivers are being given penalty charge notices as they wait for restrictions to be lifted.

Folkestone and Hythe District Council confirmed it had dealt out 15 fines to stranded drivers,

As you can imagine there were many reactions on social media