Around 2,000 migrants are reportedly living in northern France as they wait to cross the Channel. 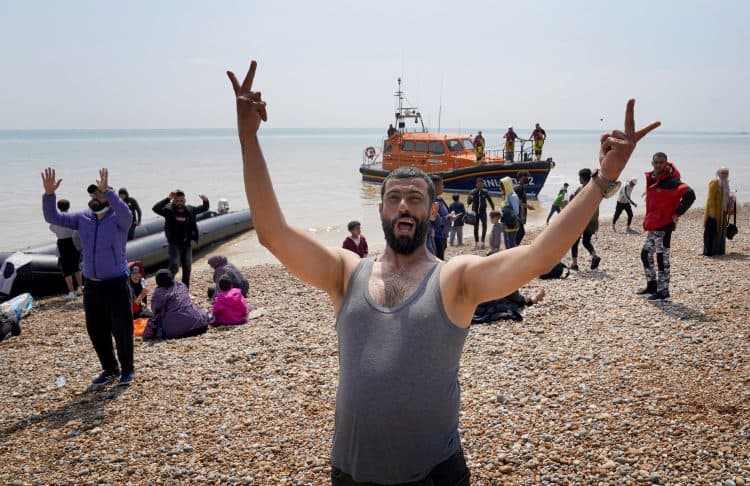 People living in camps along the coast of France have said they are determined to seek a better life in the UK – despite the Home Office targeting them with “extremely naive” Facebook ads telling them not to come.

Around 2,000 migrants are reportedly living in northern France, many sleeping rough around Calais and Dunkirk, as they wait to cross the English Channel on board small boats or smuggled in lorries.

One 16-year-old boy from Afghanistan said: “I need to go to the UK. I am ready for anything to try and get there.”

Record numbers of people have risked their lives to reach Britain in overcrowded and unseaworthy dinghies in 2021.

The crossings have continued despite various attempts by the Home Office to stop them and make the route “unviable”.

This has included spending more than £23,000 on social media ads targeted at migrants living in France between December and April, a Freedom of Information request by the PA news agency revealed.

‘There is no hiding place’

The ads on Facebook and Instagram featured slogans such as “There is no hiding place”, “Don’t put your or your child’s life in danger” and “We will return you” – translated into Kurdish, Arabic, Persian and Pashto.

The Home Office says the adverts reached thousands of people, highlighting the risk to life of making the journeys.

However, since the five-month campaign ended, more than 7,000 people have gone on to cross to the UK in small boats.

Many of those who saw the campaign on Facebook and Instagram are people who have been assisted by migrant charity Care4Calais while living in France.

Founder Clare Moseley accused the Home Office of “wasting money” and called on the Government to step up to help refugees.

She added: “I’m genuinely horrified by the lengths this Government will go to to avoid helping desperate people. Refugees risk their lives to escape from some of the world’s most dangerous countries, fully aware that this could be the last journey they make.

“It’s extremely naive of this government to think that social media ads will deter them. This isn’t a choice.”

While many of those who would have been in Calais and Dunkirk during the Home Office campaign are thought to have since crossed to the UK, some people who saw the adverts remained there in July.

Others were shown the adverts by Care4Calais volunteers, with many saying it would not stop them risking the perilous crossing.

‘We don’t have a choice’

One Sudanese man who saw the pictures on Facebook said: “We know that crossing and taking a boat is really dangerous, but we don’t have the choice. UK is our only chance and better than Calais.”

A 23-year-old man from Afghanistan said he also saw the images.

“We are not here for fun,” he said. “We have problems in our country, can’t even celebrate Christmas or Eid. We will accept these if it means UK. Seen worse than this in Kabul.”

A 21-year-old man from Gambia called for safer routes to the UK and improvements in conditions in Calais.

He said: “They are complaining, but our conditions is very hard. Everyone need good life, everyone need to leave here.”

Others spoke frankly about the dangers of crossing the Channel – a journey that has claimed lives in the past – in search of a better life in the UK.

A 20-year-old Sudanese man said: “I am ready to die, but I still have faith that I will cross OK.”

A 17-year-old boy living in northern France said: “It is not possible to stop us, we can’t stop our journeys now.

“We have seen much worse than this and we have already put our lives at risk so nothing can stop us now.”

Another 20-year-old from Sudan said: “It is their fault for colonising our country. They take our land and our culture.

“British government have always influenced our lives, the majority of people here are Sudanese.”

“The adverts are aimed at dissuading migrants in France and Belgium from making dangerous attempts to enter the UK.

“They have reached thousands of migrants highlighting the risk to life of making these journeys and providing information on claiming asylum in the safe country they are in.”