“The British public just want us to get on with it” the Prime Minister told a hastily assembled press conference, this evening, looking exhausted and shaken. Yes, a Sky Data poll today revealed that of the three options that Theresa May yesterday said are open to the country, staying in the EU would be the […] 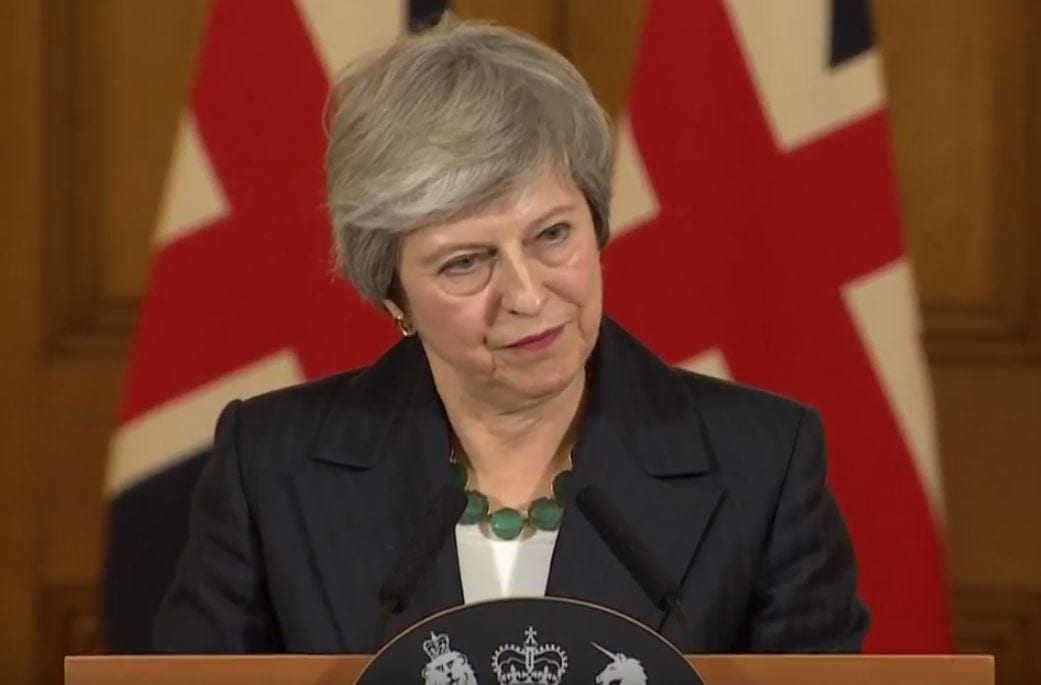 “The British public just want us to get on with it” the Prime Minister told a hastily assembled press conference, this evening, looking exhausted and shaken.

Yes, a Sky Data poll today revealed that of the three options that Theresa May yesterday said are open to the country, staying in the EU would be the mostpopular, with her Brexit deal the least popular – if the government were tohold a three-option referendum of the type favoured by Justine Greening.

This backs up YouGov’s poll on Theresa May’s deal today, which found voters of Labour, the Conservatives and LibDem all opposed it.

“I am not in denial” the Prime Minister insisted when questioned about how  she would get her Brexit deal through Parliament.

Earlier today the DUP withdrew their 10 MPs’ support that she has been relying on for a majority, making it extremely unlikely that she can get her deal through the Commons in the face of objections from Labour and her own MPs determined to vote against her deal.

Earlier Jacob Rees-Mogg publicly handed in a letter of no-confidence in Theresa May’s leadership to Sir Graham Brady, chairman of the 1922 Committee.

When asked who would make a good leader for the party, the hardline Brexiter only mentioned fellow Brexit-supporting Tories Boris Johnson, Michael Gove, Dominic Raab, Esther McVey and Penny Mordant.

The prominent Brexiter said Theresa May’s Brexit deal “has turned out to be worse than anticipated and fails to meet the promises given to the nation by the Prime Minister”.

Suella Braverman quit as minister in the Brexit department. She was the 4th resignation today after Esther McVey, Dominc Raab and the Northern Ireland Minster Shailesh Vara earlier today,

It suggests a wide-scale backlash may be on its way and it could be the beginning of the end for Theresa May.

Yesterday Tories were briefing a vote of no confidence was just a matter of time for their leader.

Speaking in Brussels on this morning after the release late on Wednesday of the Brexit agreement Donald Tusk told reporters: “I took good note of Prime Minister May’s statement yesterday.

“Of course I don’t share the prime minister’s enthusiasm about Brexit as such. Since the very beginning we have had no doubt that Brexit is a lose-lose situation and that our negotiations are only about damage control.”