The chartered flight from Muscat to Brize Norton is expected to land on British soil later tonight. 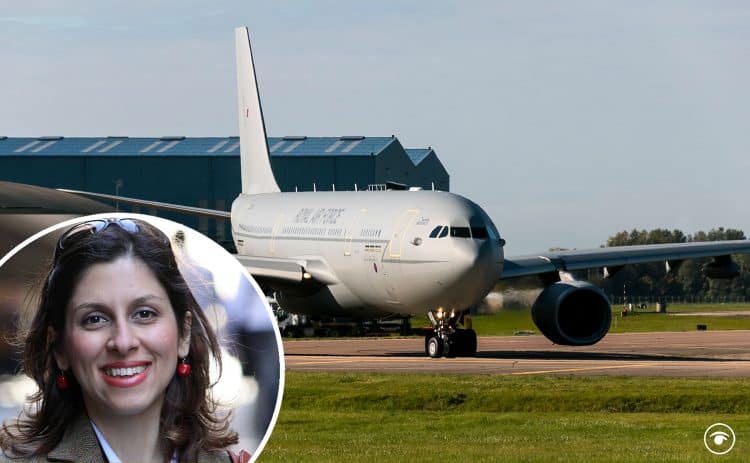 Nazanin Zaghari-Ratcliffe’s six-year ordeal in Iran is over after she was released from detention and boarded a flight out of the country as the UK Government settled an outstanding £400 million debt owed to the regime in Tehran.

Her husband Richard Ratcliffe, who has fought a tenacious battle to secure her release, said he was “deeply grateful” and that he and their daughter Gabriella were “looking forward to a new life”.

The British-Iranian mother is returning to Britain, along with a second dual national, Anoosheh Ashoori.

Mrs Zaghari-Ratcliffe was detained on security charges by the Iranian Revolutionary Guard at Imam Khomeini airport after a holiday visit to Iran where she introduced her daughter Gabriella to her parents.

Mr Ashoori has been in prison for almost five years while Mr Tahbaz has been held for four.

Their release follows months of intensive diplomatic negotiations between London and Tehran.

Foreign Secretary Liz Truss said: “We have the deepest admiration for the resolve, courage and determination Nazanin, Anoosheh and Morad, and their families, have shown.

“They have faced hardship that no family should ever experience and this is a moment of great relief.”

Ms Zaghari-Ratcliffe and Mr Ashoori were initially being take to the Gulf state of Oman – which has been closely involved in the behind-the-scenes negotiations to secure their release.

Oman’s foreign minister Badr Albusaidi posted a picture of them arriving at the airport, adding: “Soon they will be with their loved ones at home.”

From there it is expected they will be flown on a Government-chartered flight to RAF Brize Norton in Oxfordshire.

At just before 17:00 GMT a Titan Airways – a British charter airline – flight appeared on Flightradar24 with a flight path back to Brize Norton.

Here’s how to track it: