As MPs slam the Government for deleting the phrase ‘institutionally racist’ from a report on the Windrush Scandal, we reveal what those at the brunt of Home Office policy are still suffering. 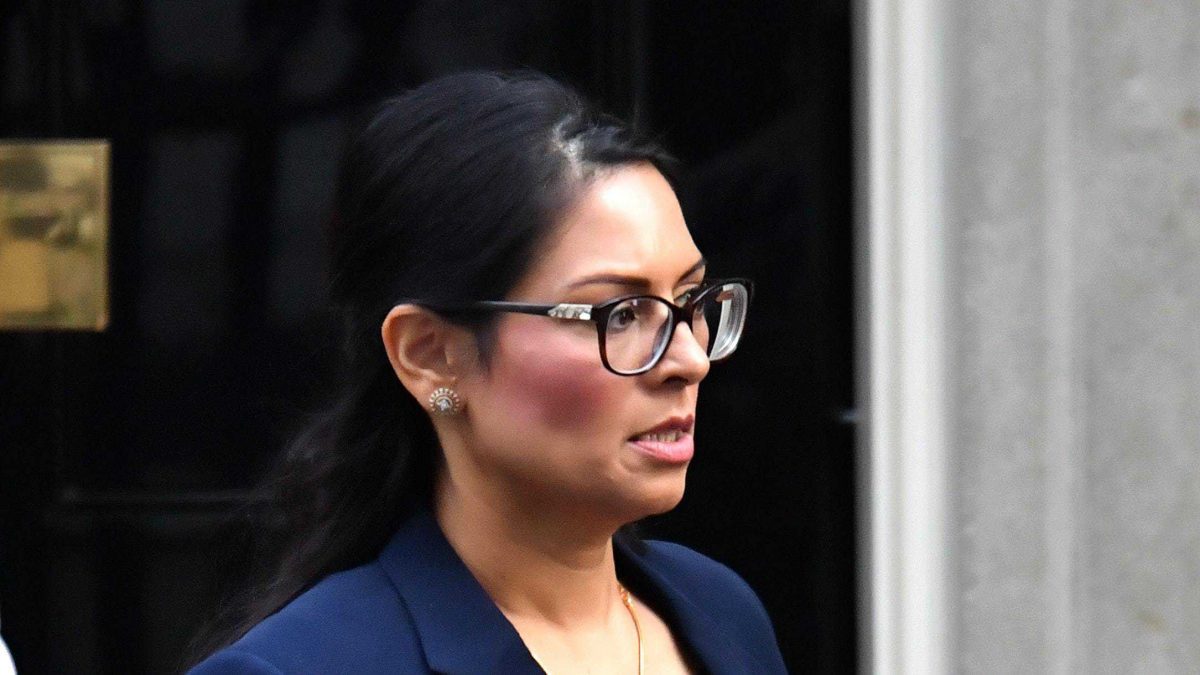 UPDATE 25/02/20: An Immigration Court judge bailed Howard Ormsby and he was reunited with his young family who came to pick him up from the detention centre on Tuesday.

On Friday MPs warned Boris Johnson’s government not to water down an independent report into the Windrush scandal after it was leaked that a section branding the Home Office “institutionally racist” has been stripped out.

Meanwhile we can reveal that many of those who won a last-minute appeal against the Home Office chartered flight to Jamaica earlier this month are still being detained by the Home Secretary.

The London Economic spoke to detainees who confirmed that the vast majority of those who were not deported to Jamaica were still being detained, despite ongoing legal proceedings.

One was being detained despite suffering from blood pressure above 200 and finally taken to hospital this weekend after days of complaining about his health. He had been taken to detention in an ambulance and driven to the removal flight in one as his health is so poor. The Home Office threatened to deport him on the flight to Jamaica and were still detaining him despite serious medical concerns about his fitness to fly.

We spoke to detainees including one father of five young children still held in a Home Office detention centre despite concerns about his deteriorating mental health and safety if he were removed to Jamaica.

Howard Ormsby has lived in the UK since leaving Jamaica as a child. His entire family live in England including his mother, siblings, partner of 10 years and his five British children. His family say he has nobody in Jamaica and would be destitute if he was removed there, away from the only country he has known for the past 17 years.

What’s more, they say his life would be endangered. Howard’s body bears the scars of attacks by a gang in Jamaica that chased and tortured him when he would not join. The same gang he says killed two of his cousins, evidence of which was provided to the Home Office when his mother brought him and his five brothers and sisters to the UK to grow up in safety.

Howard insisted: “I would be killed if I went to Jamaica.” He said he would be destitute there with nowhere to live and no family ties. “England is where I live, England is my life, all my kids are here, all my family are here,” said Howard. He has three children from a previous relationship he still sees. His fiancée Sobrena is struggling to hold down her job, look after their eight-year-old son and their three-year-old with autistic spectrum disorder symptoms, while fighting for Howard’s release.

“My son does not want to go to school,” Howard said. “He tells them he is stressed and does not want to be there because they are trying to deport his dad. I’ve never tried to deny the fact I’ve made a mistake, but everyone has a chance to right their wrongs,” he added. “I have all my family here – I have no-one in Jamaica.”

Howard said the Home Office “are punishing my fiancée, my family, my kids. I’ve done my time. This is my first offence. I did a survey in prison which showed I am 95 per cent unlikely to reoffend.”  He branded the detention of him and others who had been born in Jamaica and lived in the UK many years as “racist.”

Fiancée Sobrena Miller, 25, told The London Economic of the toll on the family since Howard was detained by immigration officers in front of his sons as he went to sign at a local police station in Peterborough where they live.

She said their eldest “keeps asking why Daddy’s not coming home. He has got support at school as he has been crying a lot. He speaks to his dad every day. He knows when his daddy’s feeling down and says ‘don’t worry we will see you soon Daddy.’

“Howard has been here since he was 15 years old. Yes he’s made a mistake – he fully knows that. There’s no time he hasn’t shown remorse and he deserves a chance to be in his kids’ lives. He is a great father and does a great job with his kids. They deserve to have both their parents in their lives.

“The kids are being punished unfairly. Other people do worse crimes. At least give someone the same chance as someone born here if they are remorseful. We are all human. The kids are the ones that are suffering the most. The Home Office are heartless. My son keeps asking me ‘why can’t Daddy be here?’ Why should my kids be punished when they are innocent?”

Sobrena who works as a housekeeper in a gym is struggling to hold her job down and find friends to look after her children when she is at work. She had just taken their children to visit Howard when we spoke, but said it had been a struggle as the youngest has difficulties travelling that far, and paying to travel from Peterborough to Harmondsworth detention centre near Heathrow was not affordable for them as they try to save up to post bail for Howard.

Sobrena said if Howard is deported to Jamaica the children would not be able to see their father as they could not afford to travel there and would have nowhere to stay.

She is also increasingly worried about his deteriorating mental state in the detention centre where he is being held with no idea of when he may be released or taken away and removed from the country. A report by a doctor in the detention centre details scars from injuries he said he suffered in sustained attacks by a Jamaican gang. It also raises concerns about his mental health for which he is receiving medication.

“His mental health is deteriorating,” said Sobrena. “He is hardly eating and brings it back up when he does, I keep trying to tell him to eat something, but food is the last thing on his mind. When we went to see him, he looked very different. He looked tired and stressed and couldn’t stop crying. He kept saying he just wants to be free either way and I didn’t like the sound of that.”

She said that before he was sentenced, he was seeing a doctor and receiving medication for symptoms of PTSD related to his childhood traumas in Jamaica. She believes that may be linked to why he started taking illegal drugs to wipe away the past while he was working at M&S.

Howard told us that he had made attempts on his life when he had been in prison and was now having regular suicidal thoughts. He said in desperation he had swallowed three batteries in Harmondsworth detention centre and was passing blood. Howard who has been detained for almost a month since January 29th, insisted: “They are trying to send me back to a country I don’t know. I am in fear of my life from gang violence.”

Howard’s mother works as a carer, and his family are struggling to raise funds to visit him in detention, let alone post bail for him. There is a fundraiser to help them fight for Howard to be released from detention:  click here.

A spokesperson for Movement For Justice who have organized the fundraiser, told The London Economic that Howard should not be detained as he has an ongoing asylum claim. “He is suffering severe mental difficulties and having suicidal thoughts on a regular basis and his family needs him right now,” they added.  “The family are struggling to get to the bail hearing and put money up for bail and he is someone who definitely should not be detained. They can’t remove him from the country any time soon as he has an ongoing case and as he is suffering mental health difficulties he should not be detained. He is just getting worse.”

Jamaicans with appeals separated from families and languishing in detention

Movement For Justice said most of the detainees they had been in touch with before the February 11 chartered flight to Jamaica who won an appeal not to be removed without access to justice are still being detained. The campaigners said there are a number of other detainees “really struggling in terms of their mental health.”

After the flight removed 17 Jamaican-born ex-offenders, the Leader of the Opposition Jeremy Corbyn accused the Government of learning “absolutely nothing from the Windrush scandal” and said the Government line that they were deporting serious criminals belied the fact that some of the people due to be deported had committed less serious crimes such as drugs or driving offences.

The Labour leader referenced Boris Johnson’s own past, after Johnson admitted in 2007 that he had taken cocaine, and a recording emerged of Johnson helping pal and convicted fraudster Darius Guppy plot to beat up a journalist. Jeremy Corbyn asked New-York-born Prime Minister Boris Johnson in parliament: “If there was a case of a young white boy with blonde hair who later dabbled in Class A drugs and conspired with a friend to beat up a journalist, would he deport that boy? Or is it one rule for young black boys from the Caribbean and another for young white boys from the US?”

Trying to overturn the Court of Appeal judgement that those like Howard who were due to be deported on February 11 despite not being able to communicate properly with legal representatives on the phone should not be removed, the Home Office had argued in court that it would take ages to charter a new plane to remove them all. Yet the Home Office has chosen not to allow them home to families and to keep them detained with no imminent prospect of release or removal.

A Home Office spokesperson told The London Economic: “We make no apology whatsoever for seeking to remove dangerous foreign criminals. We will be urgently pursuing the removal of those who were prevented from boarding the flight.” They said that 17 “foreign criminals” were deported on the charter flight to Jamaica on February 11. Since 2010 the Home Office said over 51,000 foreign national offenders have been deported.