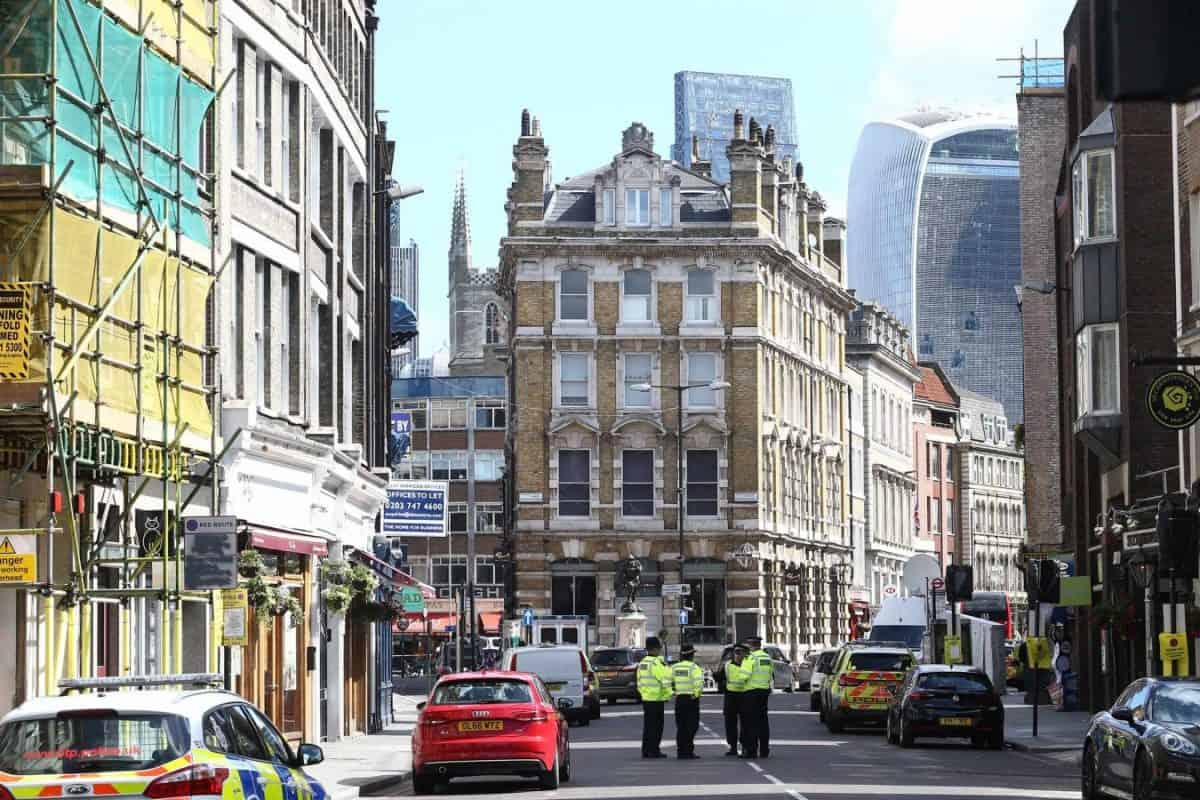 A heroic police officer who took on all three London Bridge knife attackers armed only with an extendable baton feared “his time was up” when he was stabbed, an inquest heard.

PC Wayne Marques told the inquest into the victims of the London Bridge terror attacks of the terrifying moment he fought extremist ringleader Khuram Butt, 27, Rachid Redouane, 30, and Youssef Zaghba, 22.

During the fight he had lost the vision in one of his eyes after a blow to the head but his instincts told him: “Hold on and just keep their focus on me until the cavalry arrives.”

One of the men stuck a knife into his leg before taking it out and slashing it upwards in a ‘precise movement’ that he believes was an attempt to open up the veins in his forearm.

PC Marques said: “I ended up having a voice in my head. It wasn’t my voice. And it was telling me ‘don’t go down, don’t go down.’

“That was the only instruction I received. My thought process was literally just hold on, hold on as long as I could.”

He told the inquest: “I was passing out and I thought my time was up.”

The inquest at the Old Bailey heard PC Marques arrived on the scene just minutes after the men started to attack members of the public in Borough Market.

He heard a woman scream and saw several people standing outside Tito’s, a restaurant that becomes a late night bar.

He said: “What came to my attention was the people standing outside Tito’s, they were static, they weren’t moving.

“They were all static not talking all looking in the same direction towards London Bridge Street. They looked like they were statues.”

PC Marques said a man then ran up to him pointing in the direction of London Bridge Street and said: “Mate mate, someone’s been stabbed.”

He and another officer then went over to a man lying on the floor.

PC Marques said: “He was conscious and breathing. I believe he was lying chest down. He was facing to his left shoulder.

“He was holding his right hand to what I could see a diameter of what looked like blood in his lower back area and he had his left hand up to his face.

“A member of the public then approached me and said ‘They have gone up that way’ – up towards London Bridge itself.

“I heard a scream from behind me, I was still looking at the gentleman on the floor in front of me and facing the Borough Market with my back more towards London Bridge.

“It was a woman’s scream. She seemed to be almost stumbling and then that was when I saw the first attacker get to her at that time. He got her in a headlock.

“She appeared to be trying to run. She looked more like she was stumbling but she was coming in my direction.

“The attacker was just to her right hand side. I believe he used his left arm wrapped around her neck area, his forearm was underneath her chin and neck area.

“What it looked like was he punched her with his right arm. I didn’t see the knife at this point.

“I believe I saw at least three maybe four punches towards her chest and stomach area.”

The woman, now known to be Marie Bondeville, fell to the floor and PC Marques ran towards the attacker, the inquest heard.

The attacker was ‘standing over the woman with his feet each side and he had grabbed the sides of her head with each of his hands’, it was said.

But another man, now known to be Oliver Dowling, then started to run up Borough High Street towards the officer.

PC Marques said: “He looked up towards my direction and I believe he got a glimpse of me and then he let go of her and sort of stood up.

“Straight after this I have no idea where he came from but I remember a white gentleman then came to me.

“He was also running towards my direction, he looked older but he looked like he had quite a strong big build.

“He was running down Borough High Street. He had only gone a few steps before he just fell to the floor.

“At this point I had lost sight of the first attacker.

“Oliver fell face down and almost out flat on the floor and at this point I then saw the first attacker walk over him and then while the attacker was standing there that was the first time I noticed the pink knife in his right hand.”

He said the knife ‘looked like a toy’ and he didn’t realise it was real at the time.

He said: “It was a brightly coloured quite large. A very bright colour.

“I have never seen anything like like it before. It didn’t look real to me. I was under the impression maybe it was a toy knife.

“I believe I heard the man saying ‘no, please no’.

The officer added: “I remember he was quite specific with the way he used the knife. He wasn’t hacking or slashing he was hacking at certain areas.

“The lower back area. Oliver had turned to one side and tried to cover himself so then the attacker started to attack the side of his neck.

“I realised what was happening in front of me. I got my baton extended.

“I knew I didn’t have long until he died in front of me so I got my baton out and charged the first attacker.”

PC Marques said he “took a big breath” and added: “I think I just sucked in as much oxygen as I could like I was going in for a fight.

“Once I got within three to four metres I raised my baton behind me and charged at him. My intent was to charge at him as hard as I could with everything I had.

“I knew he was planning to kill the gentleman on the floor. There was no doubt in my mind he intended to kill.

“I hit him as hard as I could – aimed straight at the head.”

PC Marques managed to subdue the first attacker with ‘around ten’ strikes until he was lying on the floor and protecting himself with his arms and hands and added he did not know where the knife had gone.

But he didn’t realise a second attacker was behind him until he was hit over the head with what he believed was a crow bar.

The blow left him without vision in his right eye for nine days, the inquest heard.

He said: “I stumbled a few steps back and my right eye was out of commission. I couldn’t use it.

“At this point I saw a knife coming toward me. I’m still on my feet.

“I saw the knife, it was the first thing I was able to focus on as it was coming towards me.

“The fight was chaotic and messy.”

Describing the attackers he said: “One of the things that stood out to me was they were very quiet. They hardly said a word.”

He said a third man then approached and he ‘instinctively knew’ he was with the terrorists.

He said his head went from side to side as he used the vision in his left eye to fight off the double knife attack with his baton.

Then he said he was struck in the leg with a knife by the first attacker who had now got off the floor.

He said: “I felt my left leg shake. I felt a shudder in my leg.

“I was fighting backwards and forwards for a while.

“I realised it was the first attacker who had got back up. He must have come around.

“I could only focus on what was in front of me so I didn’t see him coming at me. The process in my head was saying ‘you have to get the knife, this knife, out my leg.’

“I took my baton coming up high over may shoulder and came down in an arching motion at the first attacker.

“What he did was surprising. He pulled the knife out of my leg so I had missed him but rather than backing away then, he turned the knife upside down and then swiped upwards.