The parish council meeting was watched by thousands as it returned after its viral stardom. 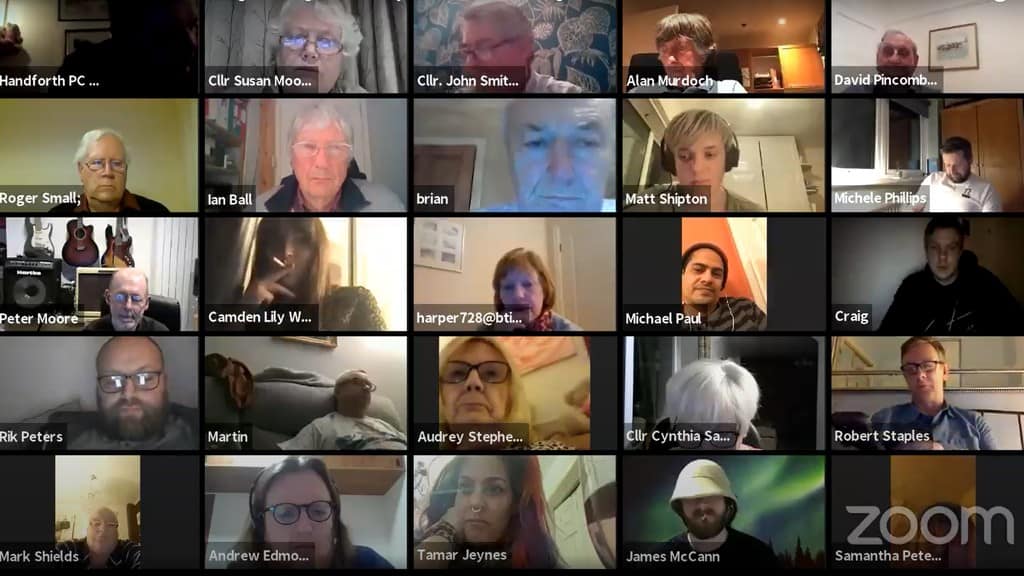 The return of a parish council which became an internet sensation was watched by thousands on Wednesday night and dogged by repeated interruptions by members of the public.

Handforth Parish Council, which rose to stardom earlier this month after a chaotic Zoom call on December 10 went viral, met again for the first time in two months on Wednesday evening.

The reunion, which did not include former star Jackie Weaver because the council’s usual clerk, Ashley Dawson, returned, was watched live by more than 3,000 people on YouTube – with many more also joining the conference call directly.

Wednesday’s meeting included a number of references to the December event, with many members of the public joining proceedings with laughter and cat-calls such as “read the standing orders, read them and understand them”.

Here's a glimpse at what happened this time round ⤵️

“Wrong on just about every point he raised”

Some members of the public could be seen smoking and drinking alcohol on the Zoom call, with one shielding their face with a large safari hat.

Tensions from the previous meeting continued into this edition, with councillor John Smith clashing with chairman Brian Tolver over the fiery events in December.

Mr Smith offered a lengthy defence of Ms Weaver, who had been running the meeting “illegally” in December, according to Mr Tolver.

And for the love of God please let Roger talk.. pic.twitter.com/VviuDNChrW

Mr Smith described Mr Tolver and others’ comments towards Ms Weaver – who twice kicked Mr Tolver out of the council meetings – as “abusive”.

In response, Mr Tolver said: “I have much to dispute in what councillor Smith just said… I don’t want to bore everybody but he was wrong on just about every point he raised.”

A member of the public asked Mr Tolver if he would like to apologise for his actions in the previous call, and Mr Tolver asked for the person to be muted.

At a number of points during the tensions, a member of the public played the Benny Hill Show theme tune.

At the end of the three-hour-long meeting, Mr Smith commented: “Hopefully next time we’ll be a bit more slick about it and the events of the last couple of weeks will have faded into the distance.

“So only those who are really interested in the parish council are here, rather than those who just want to act the fool.”

Ms Weaver had earlier said on Wednesday that she hoped the new meeting would be “productive”.

“I would have been perfectly happy to have been involved this evening but I don’t think it’s right for Handforth,” Ms Weaver told the PA news agency.

“I hope it will be the turning of a new leaf, but I fear the only thing that will resolve the tensions in Handforth is when they ultimately have an election in May, when the seat that is currently vacant is up for election.”

“At the end of the day, what’s sadly missing from all of this is respect”

The motion, proposed by Cheshire East Conservative councillor Liz Wardlaw, claims Mr Burkhill “made no attempt to intervene as it became clear participants in that meeting were being bullied”.

Asked for her thoughts on the no-confidence vote, Ms Weaver said: “Cheshire East policy, its whole ethos over the last five years, has been anti-bullying… and here we have councillor Burkhill sitting and watching it play out in front of him and not lifting a finger.

“At the end of the day, what’s sadly missing from all of this is respect.”

Ms Weaver became an overnight internet sensation for her calm handling of December’s meeting, which saw Mr Tolver kicked off the call twice, including in the council’s extraordinary meeting held later in the evening.

When fellow councillor Susan Moore called for civility, the meeting erupted into semi-hysterical laughter and Mr Brewerton and Mr Burkhill were also removed.