Pressed on breaking the law, Hancock said he would do the same thing "if given my time again". 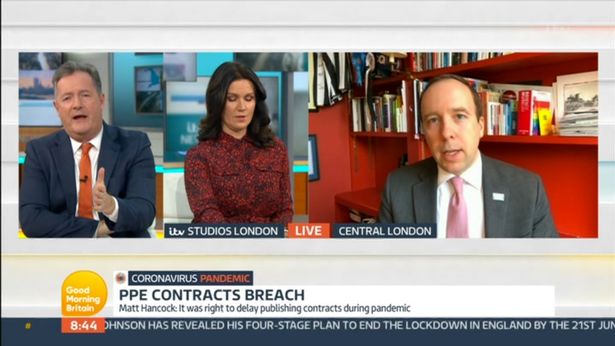 Matt Hancock has claimed there was never a “national shortage” of personal prospective equipment – and his “team” should be thanked for their work procuring face masks and gowns.

The health secretary was found to have acted unlawfully by the High Court last week, after he delayed the publication of details of lucrative coronavirus contracts handed out in the first peak of the pandemic – often to figures with political links to the Tory party.

But appearing on Good Morning Britain on Tuesday to discuss the government’s plans to ease lockdown, Hancock was pressed to apologise for breaking the law.

Facing down Piers Morgan, he admitted that some places were hit with local PPE shortages – but the country was able to avoid nationwide shortages “thanks to my team”.

He added: “If I were given my time again and given the choice between doing work that saved lives or filing paperwork on the right date, I’d have done the same.”

Hancock continued: “My job is to save lives Piers, and that is what we did… just let me answer the question. The demand for PPE went up 10 times so of course my team was massively stretched.

He added: “There were shortages locally, there was no national shortage because of the work my team did. I back them 100 per cent.”

Morgan branded Hancock’s retort “an extraordinary response to breaking the law” – and accused him of lying that there had been no country-wide PPE shortage.

The health secretary added: “I think we should be on this show thanking my team, they worked so hard.”

Morgan fired back: “If you wanna play that game with us, you and your team have resided over a woeful handling of this pandemic that has led to us having the worst death toll in Europe.”

He added: “So I’m sorry if my first thought when you come on is not to thank you and your team for their brilliant handling of this pandemic.”