Greg Hands was asked why Michael Gove made the promise if it is now considered a bad move. 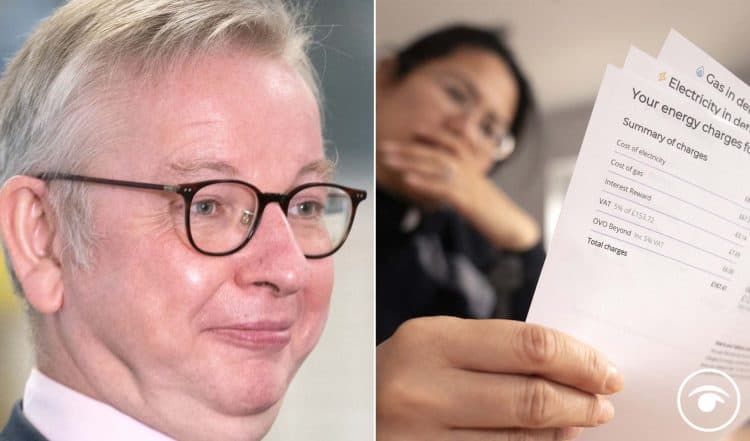 A Tory minister has claimed a VAT cut for energy bills would be an “untargeted” measure, despite Boris Johnson and Michael Gove promising it as a Brexit benefit ahead of the 2016 EU referendum.

Greg Hands, who is a business and energy minister, argued a VAT cut would benefit UK people “disproportionately” when asked why the measure has not been adopted after Brexit as promised.

Interviewing Hands, BBC presenter Martin Geissler asked him why Michael Gove made the promise if it is now considered a bad move.

“That is a question better put to the Vote Leave campaign,” Hands replied.

“There’s a lot they said in the runup to that vote that hasn’t happened,” Geissler noted.

The dialogue comes in the context of a 54 per cent cost increase for UK energy bills, whilst France’s rise is only four per cent.

Geissler pointed out the huge difference, before highlighting various measures taken by other European countries to help with their residents’ cost of living whilst UK’s prices are rising across sectors and a national insurance hike is set to kick in in April.

“Germany has scrapped the green surchages on bills, the stuff your colleague David Cameron referred to as the green crap, why can’t we get rid of that?,” Geissler said, adding: “Greece has put up the minimum wage, it’s also cut property tax.”

Hands replied: “Well, if you look at what the UK government is doing, I think it compares favourably with the average of European countries, it’s more available than, for example, Germany’s support package.”

Meanwhile, Energy Secretary Kwasi Kwarteng has come under fire after claiming France ‘scared investors’ when asked why the French have much lower energy price hikes.

“What have the French got that we don’t have, except maybe a better government?,” Sky News presenter Trevor Phillips asked.

Kwarteng replied: “The French were exposed to higher prices, they’ve also managed to scare a lot of people who were trying to invest in France. We’ve got the highest inward investment in any country in Europe.

“That’s relevant to this whole equation that we’re securing jobs, hundreds of thousands of jobs. We’ve got a very, very low unemployment rate.

“But you’re right to say that the cost of living is an issue.”

Kwarteng’s interview has prompted hundreds of reactions, with actor Omid Djalili saying it is “evidence” that gas prices have risen “because of industrial-scale gas lighting”.

“I’m sure those having to choose between heating and eating will be pleased that we’re keeping prices high so energy companies still like us,” actor David Schneider added.