The former prime minister wants to get the rich to donate their £150 Council Tax rebates to help those suffering. 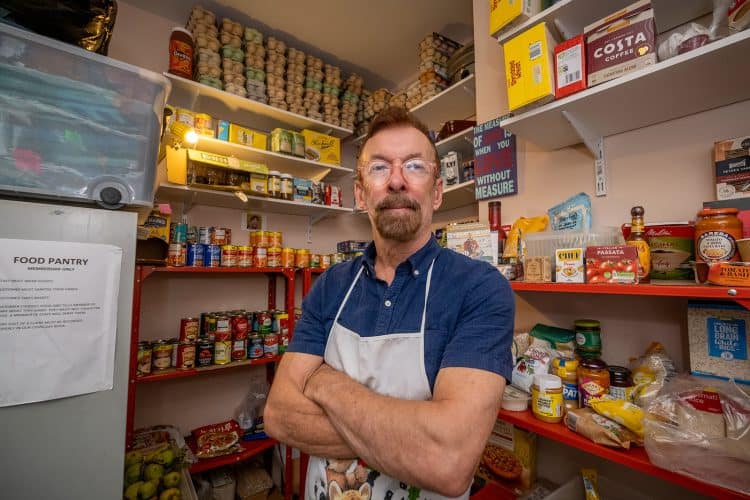 Former Prime Minister Gordon Brown has stepped in to try to save a food bank in a scheme to get rich people to donate their Council Tax rebates.

We Care Food Bank owner Ray Barron-Woolford was trying to raise £25,000 to stop the largest food bank in the UK from going under after his refrigerator bills skyrocketed to £30,000.

He was invited to speak on BBC Radio 4 but thought his 6.15am slot wouldn’t get any listeners.

But he was shocked when he turned up to work at the food bank at 10am and Gordon Brown’s team was waiting for him.

They told Ray he might recognise the name of their boss.

The former Prime Minister had heard Ray’s story and decided he wanted to help by getting the rich to donate their £150 Council Tax rebates to those suffering and started the ball rolling by donating his own.

Ray said despite the massive uptick in support – including a £2,000 donation from Quality Fire Safety Management – the former Labour leader was disappointed they didn’t reach their £25,000 target in the first day.

And although Deptford is a long way from his Scottish homeland Ray’s shop, Kath’s Place is named after civil rights activist Kath Duncan who shares a birthplace with Mr Brown of Kirkaldy Scotland.

Ray welcomed Mr Brown’s point that those with extra cash should use it to help those in need.

“But last Thursday I was invited on BBC Radio 4. I was given a 6.15am slot and I thought wow that is such an ungodly hour, I thought nobody would be listening.

“But blow me down when I arrived at the food bank at 10am that morning there was Gordon Brown’s team asking how they could save us.

“They said our boss sent us here to find out what we can do to save your food bank.

“I said “Who’s your boss?” and then said “You may have heard of him actually, he used to be the Prime Minister.”

“Gordon’s idea was to target people who are better off, who have been given the Council Tax rebates but don’t need it.

“He said let’s get all those people who have the extra money to give it to those who need it.

“So that’s what we planned to do and he started the campaign. He put out his Tweet with #HungerAlert and his announcement about donating £150 and it all went live yesterday.”

When Gordon sent the tweet it marked the launch of their joint project, it has since had 61 likes and 25 retweets.

It matched Kath’s Place’s one: “WeCare #Foodbank will run out food without £25,000. If 100 of us giving £150 of our energy/council tax rebates – matched by business will allow the food bank to stay open.”

Ray hasn’t met Gordon in real life but praised him for being humble throughout the process.

The charity owner praised the politician for his transparency, and acknowledged he had to back up his story on food banks being the last front line in Britain.

He said: “We’ve had very few trolls which is great, most of the time you put out a campaign and get loads of people replying with negative stuff but most of it has been praise.

“I like him too – he’s basically the only person who’s got money who’s basically said this is what I’ve got, this is how much I’m giving, and this is where the money’s from.

“Loads of rich people don’t tell you where they’re sending it when they say they’ve donated money.

“People who can afford £150 are saying they’re giving it but not actually sending it through, just so they look good.

“He’s actually been getting stick because he’s a Scottish MP and we’re a Deptford food bank.

“But Gordon didn’t know it was called Kath’s Place after the famous charity worker Kath Duncan.

“Kath’s from a place named Kirkcaldy, and Gordon Brown was MP for Kirkcaldy – so there was a Scottish connection after all.

“It was almost as if she came from the ground from the dead to save us.”

The politician’s efforts are paying off, even if it’s not happening as fast as he’d like.

Ray was frustrated by well-off people refusing to give their money to food banks, and questioned why they would give £25million to Captain Tom but refused to help those that were starving.

He agrees with Gordon’s idea that the rich should give the money to those who don’t need it when people are struggling as much as they are.

He added: “The fundraising has been going well since then. We’re getting match funding – we’ve got about 3,000 quid plus we’ve got matching Gift Aid donations taking it up to 6,000.

“Another company has rung today and they’ve donated £2,000 separately since Gordon put out his Tweet.

“But I think he is disappointed we didn’t reach our £25,000 target on the first day.

“There’s belief among those who are better off that those using foodbanks aren’t deserving of the money, do they not work hard enough? Are they not struggling enough?

“But they don’t realise it could be them. People are getting clobbered who weren’t suffering before, even corner shops now, if you go in one they’ve probably got their fridges and freezers turned off.

“Though he recognises that by tweeting he is doing that, really he’s just saying look, if you have a £150 council tax rebate and you’re well off give and don’t need it give it to someone who needs it.

“By being open about it he’s encouraging people to join in.

“I’m an activist, you know, so I had issues with Gordon when he was in power. But this isn’t political, this is about making sure people who have money who don’t need it give it to organisations, give it to people who do.

“For the grace of god anyone can end up in this crisis.”