“Perhaps it's not a good idea for Richard Madeley to start talking about the war going nuclear to that poor woman hiding in her basement with her three children in Kiev?," one Twitter user said. 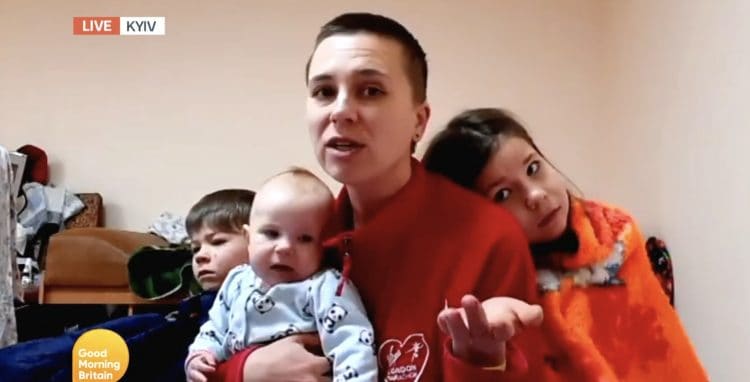 The ITV presenter together with co-host Susanna Reid were interviewing former TV journalist Olena Gnes this week, as Gnes was hiding in the basement of her flat with her three small children.

Gnes told the ITV hosts her shelter was not completely safe because she heard an explosion that recently happened nearby.

‘Possibility of this going nuclear’

Madeley replied: “We know that two innocent people were killed, at least three injured. Those figures may go up as reports come in.

“You’re in a make-shift shelter very close to where this happened. What is your shelter?”

Then, Gnes told GMB that politicians in the West remind her “of an appeaser who is feeding a crocodile, hoping that the crocodile will eat him last.”

But Madeley lectured her about Western politicians whilst telling the frightened mother that the war could “go nuclear”.

“What they are worried about Olena, is the possibility which didn’t exist when we were facing Hitler or not facing Hitler, of this thing going nuclear,” Madeley said.

But Gnes suggested Ukraine was not doing “anything very special” to make Vladimir Putin angry and trigger a war, adding that there is nothing the West could do that could irritate Russia more or escalate the current situation.

‘It’s not really about Ukraine’

“Putin will put all the blame of this economic situation on the Western sanctions, on Ukraine, they already blame you that you give us a lot of arms.

“You are already involved.”

She added: “I know that even on your channel there were experts who were saying before it all started that it’s not really about Ukraine, it’s a dialogue between Washington and Moscow.

“So why are you right now pretending that it’s not about you, that it’s only about Ukraine and you can give us arms to protect ourselves?”

“We do hear you loud and clear,” Madeley replied.

But Twitter users hit out at the way the conversation was handled, with one Twitter accusing Madeley of having “no understanding at all” for “telling her and her children about bombs dropping in the next apartment”. The user pointed out Madeley is in a “comfortable warm studio” whilst Ukrainians like Gnes are facing very cold temperatures and “managing as best they can to survive”.

Another Twitter user asked: “Perhaps it’s not a good idea for Richard Madeley to start talking about the war going nuclear to that poor woman hiding in her basement with her three children in Kiev?”

Russian president Vladimir Putin has indicated earlier this month that any country which imposes a no-fly zone over Ukraine will be joining the conflict in Ukraine, leading to a bigger war.

Related: Kay Burley tells Ukrainian refugees in Dublin that ‘British people are behind them’