The US launched its threatened hefty steel and aluminium tariffs despite 100 Congress men writing to the President warning that this would precipitate a trade war and global economic disaster. Donald Trump signed an order meaning US steel imports now face a 25% tariff and aluminium 10%. Trump exempted neighbouring Canada and Mexico, and hinted […] 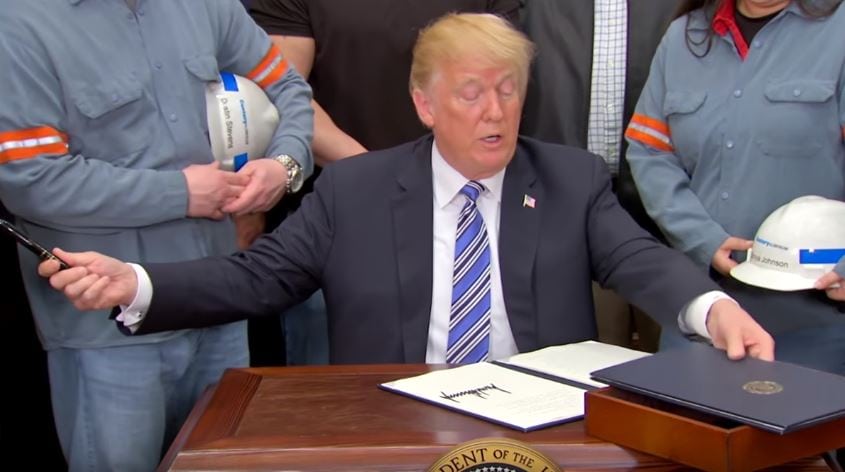 The US launched its threatened hefty steel and aluminium tariffs despite 100 Congress men writing to the President warning that this would precipitate a trade war and global economic disaster.

Trump exempted neighbouring Canada and Mexico, and hinted that “flexibility and cooperation” would be shown to friendly countries.

The UK will be hit hard. 15% of our steel exports go the US.

With 7.5 million tonnes of steel produced in the UK, the British steel industry could be destabilised, Coming out of the global recession of 2008, the tarrifs are a major threat to the British economic recovery.

China and the EU threatened retaliation, as a worrying trade war looks set to commence.

China which produces half the world’s steel described the move as a “serious attack on normal international trade order”.

US President Donald Trump’s proposed hike in steel tariffs could be ‘devastating’ for the UK steel industry and manufacturing, Britain’s largest union, Unite have warned too.

Unite national officer for steel Tony Brady said: “US tariffs on UK steel would be devastating for the British steel industry and the thousands of workers who have battled for its survival, alongside their trade unions.

“Any tariffs imposed on UK steel by President Trump on a scale that is being mooted would be misguided and deprive US manufacturers of some of the most specialist steel in the world.

“The dumping of cheap Chinese steel into the UK took our world class British steel industry to the precipice because of the British government’s inaction.

“Government ministers and Theresa May must back Britain’s steelworkers and manufacturing communities by securing assurances from President Trump that they will not be caught up in a global tariff war between the US and countries such as China.”

European leaders have already threatened to retaliate on US produce such as orange juice, peanut butter, bourbon whisky, motorcycles and jeans. France warned there would be no winners in a trade war.

UK trade minister Liam Fox insisted tariffs were the wrong response to steel overproduction and said that he would be seeking an exemption too when he visits the US next week.