"Nursing staff would not find this remotely acceptable. Years of pay cuts from ministers should not be capped off with yet another real-terms fall in salaries." 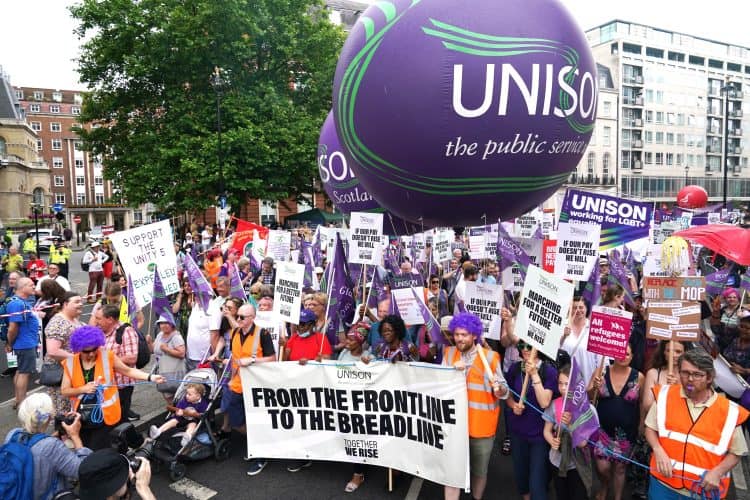 Unions have reacted with anger to suggestions that the Government will offer a 5% pay rise next week to public sector workers including nurses.

Health unions have been waiting for months for a decision on pay after the NHS Pay Review Body made its recommendation to ministers earlier this year.

The Financial Times reported that a 5% pay rise will be announced next week, just before Parliament breaks up for the summer recess.

Unions have been pressing for a decent wage rise amid soaring inflation and staff shortages they blame on poor pay.

“Nursing staff would not find this remotely acceptable. Years of pay cuts from ministers should not be capped off with yet another real-terms fall in salaries.

“There are tens of thousands of vacant nurse jobs and this treatment pushes more out of the profession.

“Our members in Scotland have an offer of this level on the table and we have come out against it – asking members to reject it and consider industrial action if ministers do not move.

“Ministers in Westminster still have the opportunity to see the writing on the wall and do the right thing by nursing.”

Unison’s head of health Sara Gorton said: “A pay rise less than inflation won’t be enough to persuade disillusioned health workers to stay in the NHS.

“If more staff leave, the health service will soon be unable to cope, making queues for tests and treatment even longer.

“Ministers must act on pay to protect the NHS, patients and staff, and avoid the prospect of a dispute no one wants.”

TUC general secretary Frances O’Grady said: “Unions will study the details of any offer very closely because this PM can’t be trusted on public sector pay.

“Our amazing public servants – who got us through the pandemic – have already endured a decade of pay freezes and cuts.

“With Britain in the middle of the of the worst cost-of-living crisis in generations and inflation rampant, public sector workers can’t afford for their wages to be held down again.”

A government spokesperson said: “The government wants a fair pay deal for nurses, doctors and the taxpayer, and is carefully considering the recommendations from the independent pay review bodies.

“We are incredibly grateful to all NHS staff and they received a 3% pay rise last year – increasing nurses’ pay by £1,000 on average despite a public sector pay freeze, and we are giving NHS workers another pay rise this year.”

Related: No 10 won’t say if Johnson will join Cobra heatwave meeting as he ‘prepares for Chequers party’