The comedian hit out at Priti Patel and the UK government over their decision to send asylum seekers to another country to have their cases processed. 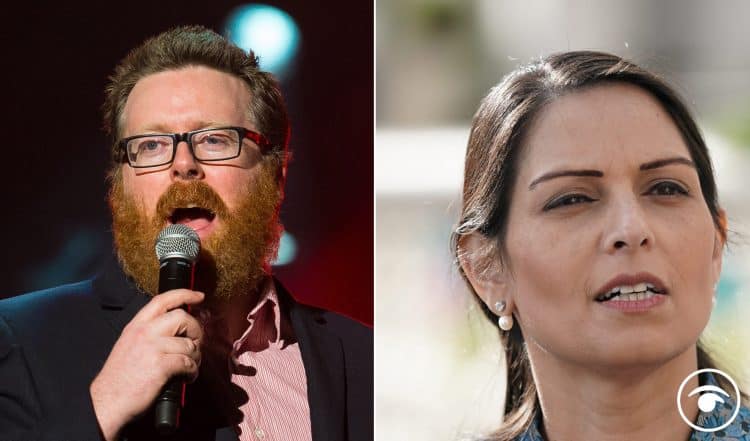 Boris Johnson has put the Navy in command of the English Channel as he defended plans to send some asylum seekers who make the crossing in small boats to Rwanda.

The prime minister conceded on Thursday that he expects plans to fly migrants more than 4,000 miles to the East African country to be challenged in the courts.

But after widespread criticism from opposition MPs and refugee charities he denied the multi-million pound measures are “draconian and lacking in compassion”.

Mr Johnson deflected repeated questions about the fine he has received for breaching his own coronavirus laws as he set out his migration plans in a speech in Kent.

“The financial and human cost will be considerable; evidence from where offshoring has been implemented elsewhere shows it leads to profound human suffering, plus the bill that taxpayers will be asked to foot is likely to be huge,” she added.

“We are not convinced this drastic measure will deter desperate people from attempting to cross the Channel either. People come here for reasons we can all understand, like wanting to be reunited with loved ones, or because they speak the language. Making it harsher may do little to stop them risking their lives.”

Enver Solomon, chief executive of the Refugee Council, urged the Government to “immediately rethink its plans”.

“We are appalled by the Government’s cruel and nasty decision to send those seeking sanctuary in our country to Rwanda,” he said.

“Offshoring the UK’s asylum system will do absolutely nothing to address the reasons why people take perilous journeys to find safety in the UK.

“It will do little to deter them from coming to this country, but only lead to more human suffering and chaos – at a huge expense of an estimated £1.4 billion a year.”

Responding to Patel’s post on Twitter, Boyle hit out at the policy by writing: “The reason you don’t have a significant fascist party in Britain is that those voters are very happy with the government.”