Watson's carer was also sprayed with ammonia during the terrifying incident, a court heard 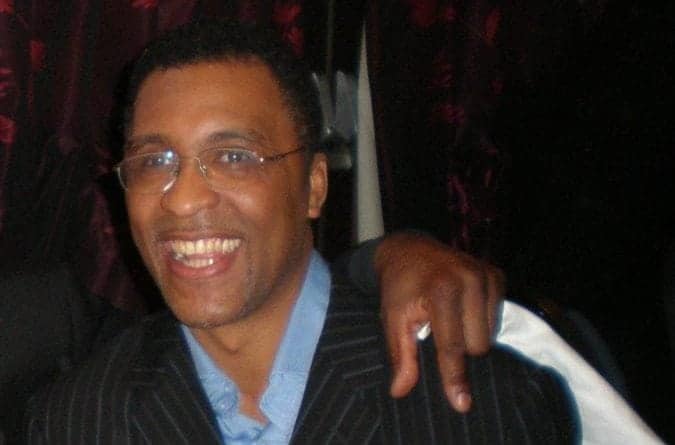 Former boxing champion Michael Watson was left hanging out of a car with his head hitting the road during an attempted carjacking, a court heard.

The disabled former fighter’s carer was also sprayed with ammonia during the terrifying incident, the court was told.

Lennard Ballack was sprayed with the corrosive liquid as thugs tried to steal the car he was driving with the ex Commonwealth middleweight champion near their home in Chingford, east London.

Mr Ballack was ordered out of the car as he screamed with pain, the court heard, but Mr Watson got caught in the seatbelt of the passenger seat.

A witness said they saw Mr Watson being pulled along the road for 150 metres as he hung out of the car door on February 16 last year.

His boxing career was cut short as a result of a near-fatal brain injury sustained during a fight against Chris Eubank for the WBO super-middleweight title in 1991.

Simon Luck, 29, and Paul Samuels, 31, and Anselm Legemah, 23, are charged with one count of conspiracy to commit robbery on January 28 last year and one count of applying a corrosive liquid on February 16.

Luck and Samuels are also charged with applying a corrosive liquid during a similar car jacking incident on February 4.

Robert Evans, prosecuting, said: “This case concerns a conspiracy, an agreement to rob people of their cars – the cars they are driving – in what’s called car jacking.

“The method the robbers in this case use is this – they start off in another car, when they see a car they want to steal they pull up behind it.

“One gets out of the car, they come in and go to the window of the drivers door of the car they are going to steal.

“They get that driver to open the window and the robbers then squirt ammonia into the face of the driver.”

The court heard the robbers then order the driver and any passengers to get out, before driving away in their car – closely followed by an accomplice in the car they arrived in.”

Prosecutors say the first of these car jacking occurred on February 4.

Mr Evans said: “They had just pulled up at Esso patrol station on Church Hill in Loughton.

“They had been caught short and were looking for a toilet. A white Mercedes pulled up behind the car.

“A male in dark clothing with a yellow stripe down the side of his trousers gets out of the front passenger side.

“He goes to the drivers door of the Audi and in his statement, Mr Robinson says the robber asks him if he had a light and then he squirted ammonia into his eyes and his face.

“Another male gets out of the front passenger door in a grey hooded top with black piping and goes to the passenger side of the Audi with the first robber who is already in the drivers side.”

Mr Robinson’s received life-changing injuries as he now cannot see without the aid of contact lenses – which are still unable to give him perfect vision.

Jurors heard that on February 17, a white Mercedes pulled up alongside Mr Ballack as he checked his car for damage on the Ridgeway in Chingford.

Mr Evans said: “The second robbery takes place in Chingford on February 16 – before the white Mercedes crashed and was recovered.

“The victims in this robbery was a man called Lennard Ballack and a former boxer called Michael Watson.

“Two weeks after the first robbery in Loughton the defendants were at it again.

“This offence happened shortly before 5pm. Lennard Ballack and Michael Watson were in their VW golf on a road called Ridgeway.

“The traffic at the time was described as being heavy. The golf was bumped from behind so Mr Ballack who was driving pulled over to see whag the damage was.

“While he was out the car he was approached.

“She realised it wasn’t water by the drivers reaction – his screams of pain. The attacked the dragged the driver out his car and continued to attack him on the ground.

“This includes the driver being punched and hit. When he tried to get up he was pushed and kicked down again.

“Eventually the attacker jumped into the driver side and drove off in the golf.

“Someone was hanging out of the passenger door. It looked to a witness like he couldn’t get up.

“His body was described as flapping up and down and hitting the road for 150 metres or so until the driver stopped and got back into the white Mercedes he had arrived in.

“That passenger was Michael Watson. He had cuts and abrasions to his face an injuries to his back were seen.”

Luck and Samuels, both of Manor Park, Newham, are charged with conspiracy to commit robbery and two counts of applying a corrosive fluid.

Anselm Legemah, of Plaistow, Newham, is charged with one count of conspiracy to rob and one count of applying a liquid.