Tens of thousands of ambulances were dispatched with single crew in Scotland over the past four years. Despite the Scottish government previously saying single-crewing should occur only in “exceptional circumstances”, a FOI request has today revealed that paramedics were sent out on their own to 2,204 emergency call-outs in 2016/17, and 3,514 went out the […]

Tens of thousands of ambulances were dispatched with single crew in Scotland over the past four years.

Despite the Scottish government previously saying single-crewing should occur only in “exceptional circumstances”, a FOI request has today revealed that paramedics were sent out on their own to 2,204 emergency call-outs in 2016/17, and 3,514 went out the year before.

The numbers have followed an upward trajectory since the data was first collected in 2013, when 1,644 ambulances were sent out with a single crew.

First Minister Nicola Sturgeon warned against single-crew call-outs while she was health secretary a decade ago.

She said at the time: “I have made it clear to the Scottish Ambulance Service that it must take action to eliminate rostered single-manning.

“The policy of the Scottish government is clear – traditional accident and emergency ambulances should be double-crewed, with at least one member being a paramedic, unless in exceptional circumstances.”

The Scottish government say the numbers remain low in comparison with the actual number of shifts across Scotland.

A spokesperson said: “The statistics being quoted need to be seen within the wider context of over 670,000 shifts across this period, meaning only 1.5 per cent of these were single-crewed.

“We continue to recruit and train staff across the service to ensure we provide a high level of patient care at all times.” 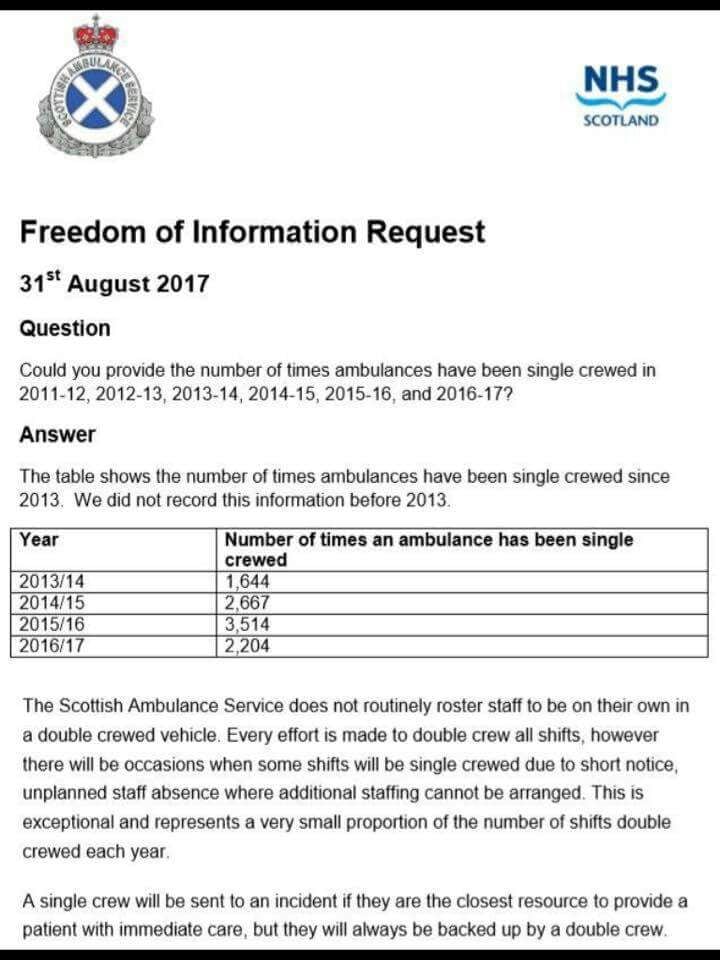