“Brexit was meant to save us, but instead we’ve been left high and dry," one fisherman said. 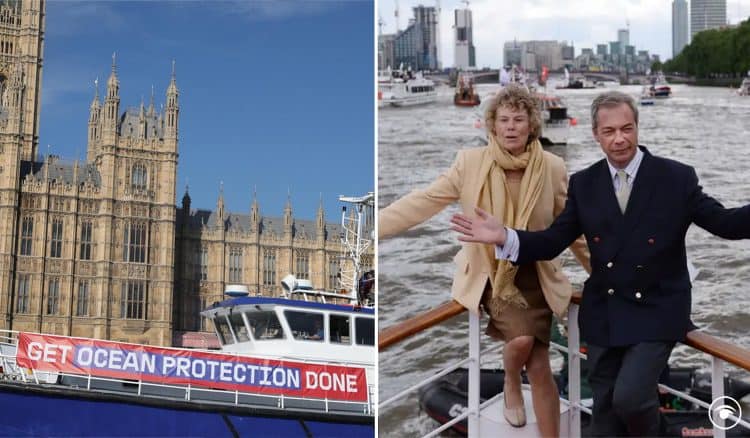 Fishermen and Greenpeace activists have protested against Brexit promises for fishing communities that have not been delivered.

The groups sailed up the Thames in a flotilla in a bid to urge the government to take urgent action against industrial fishing and support fishing communities.

The flotilla stayed outside the Parliament with banners reading “No fish, no future” and struggling fishermen’s testimonials were played over loudspeakers.

‘Brexit was meant to save us’

Neil Whitney, a south coast fisherman who is part of the flotilla, said: “Brexit was meant to save us, but instead we’ve been left high and dry. These big factory boats keep fishing in our waters, devastating fish populations.

“There’s nothing left for us local fishermen. We need the government to do what it promised, and ban industrial fishing to protect us fishermen and our fishing communities.”

Another fisherman, Martin Yorwarth, said: “Fishermen like me care deeply about our oceans. We’re custodians of our seas, and we need them to stay healthy to keep us in the job.

“It hurts me to see these huge factory ships and fly-shooters plundering our waters, hoovering up fish, destroying habitats and leaving nothing left for us.

“If our government doesn’t do something to stop the industrial fishing that’s destroying our oceans, then there won’t be another generation of local fishermen like me.”

It comes after Boris Johnson said in January that Brexit gave the UK a chance to ban ‘hoover trawlers’, but nine months since the UK officially left the EU, there are no restrictions in place.

The prime minister, along with business secretary Kwasi Kwarteng, Scotland Office minister David Duguid and Scottish Tory leader Douglas Ross, met with the heads of a number of fishing organisations.

Scottish Seafood Association chief executive Jimmy Buchan pressed the Prime Minister on the number of staff lost to the industry as a result of Brexit, which has dramatically reduced the number of seasonal workers in Scotland and had an impact on the seafood sector.

Mr Buchan said: “I sought an assurance that the Government would work closely with us to resolve the critical shortage of labour.

“He agreed that a campaign was required to encourage young people into the industry and on the need for direct action to stem the haemorrhage of overseas workers that has occurred since January 1.”

Mr Buchan was also among the sector leaders to tell the prime minister the Brexit deal “had fallen far short of expectations”.

The sector saw delays in exporting goods when red tape imposed by the deal caused tailbacks at Dover.

Before the 2016 EU referendum, Nigel Farage, then UKIP leader, and Labour’s Kate Hoey, were campaigning on a boat on River Thames for the pro-Brexit group Fishing for Leave.

Fishing for Leave also had a flotilla of fishing boats in 2019 on River Tyne, to protest against the Tories’ Brexit plans.

A Fishing For Leave spokesperson said at the time: “The terms of the Withdrawal Agreement are an existential threat to fishing and a total betrayal of Brexit and Britain.

“It means a second surrender of our industry and coastal communities and places a constitutional bomb under democracy.”

Related: ‘Waste’: Fisherman says exporting to China is ‘cheaper and easier’ than to France post-Brexit