"Not as easy to get laughs when your audience aren’t pissed-up fellow Tories at a £1k-per-plate black tie function, is it?", wrote one Twitter user. 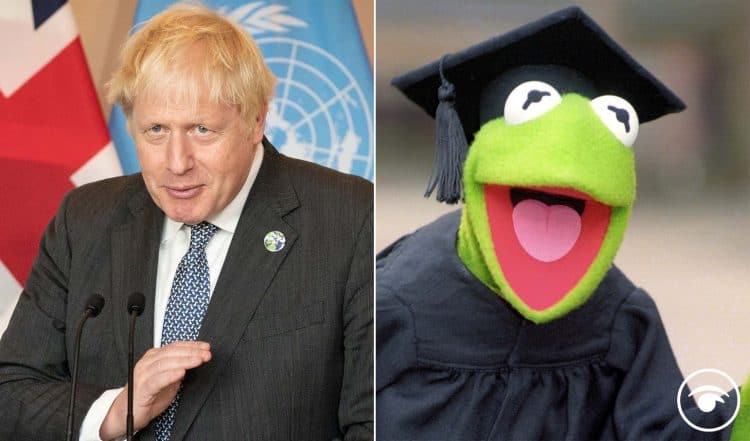 Earth is not “some indestructible toy”, prime minister Boris Johnson told world leaders as he spoke of the upcoming Glasgow COP26 summit as “the turning point for humanity”.

To emphasise the point, he also added Kermit the Frog was wrong when he said It’s Not Easy Bein’ Green.

Johnson called on countries to cut their carbon emissions by 68 per cent by 2030 compared with 1990 levels, praised the end of China’s international financing of coal, and congratulated Pakistan’s pledge to plant 10 billion trees.

The 20-minute speech ended with references to renowned Greek writer Sophocles and a Muppet.

‘It is easy. It’s not only easy, it’s lucrative and it’s right to be green … And he was also unnecessarily rude to Miss Piggy, I thought.’

He added: “Sophocles is often quoted as saying that there are many terrifying things in the world, but none is more terrifying than mankind, and it is certainly true that … we are uniquely capable of our own destruction, and the destruction of everything around us.

“But if you look at the Greek, Sophocles actually said … was that man is deinos and terrifying isn’t quite right as far as a translation for deinos. What Sophocles really means is humanity is awesome – both terrifying but also awesome.

“In the next 40 days, we have to choose, the world has to choose what kind of awesome we’re going to be.”

It is cringeworthy but must be watched.

As expected, people leapt on it on social media.

Related: Starmer wrote a 14,000 word essay – no one read it – but they were quick to comment