“White nationalist” Alison Chabloz, 54, was convicted of three charges relating to songs mocking the Holocaust posted online and given a suspended jail sentence by magistrates which she appealed against. But the UK’s first conviction over Holocaust denial posted on social media was upheld this week. Chabloz from Glossop, Derbyshire, who described herself as a […] 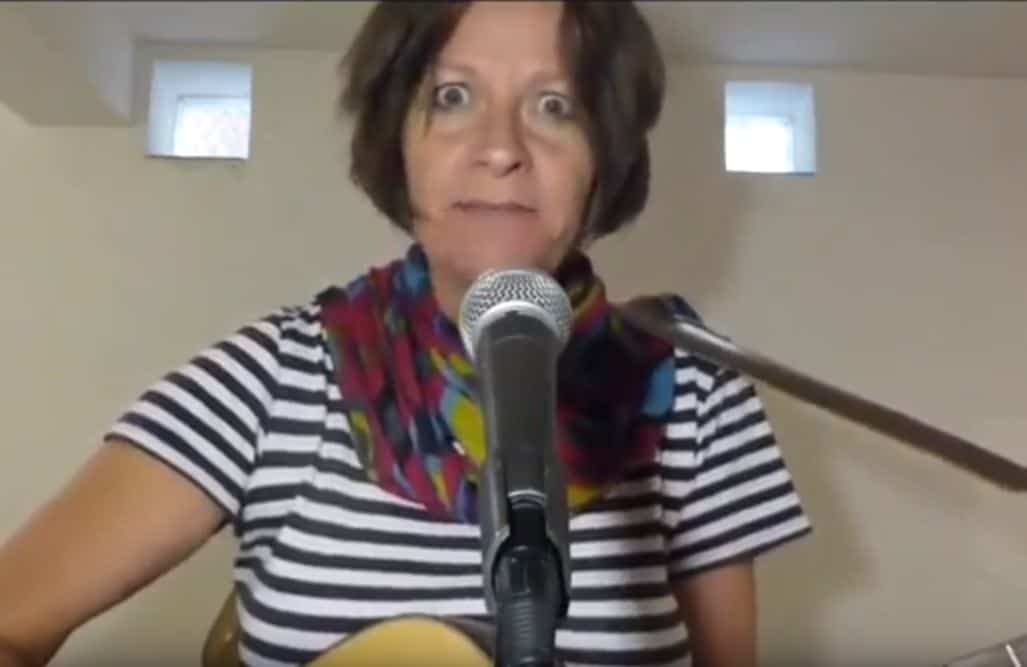 “White nationalist” Alison Chabloz, 54, was convicted of three charges relating to songs mocking the Holocaust posted online and given a suspended jail sentence by magistrates which she appealed against.

But the UK’s first conviction over Holocaust denial posted on social media was upheld this week.

Chabloz from Glossop, Derbyshire, who described herself as a “white nationalist” in her blog appealed the conviction and argued her songs were satire.

But this week a judge at Southwark Crown Court upheld her conviction ruling her mocking songs were “particularly repellent”.

In lyrics to her song entitled “Nemo’s Anti-Semitic Universe” Chabloz branded Auschwitz a “theme park,” the gas chambers a “hoax” and dubbed the Holocaust a “holohoax”.

She also sang the antisemitic songs at a meeting of the far-right London Forum group, whose leader Jeremy Bedford-Turner has been separately jailed for stirring up racial hatred.

Chabloz had claimed she was being victimised to “spoil the chances of a nationalist revival.”

She had also boasted that “whatever the verdict, it’s a win-win situation as it would gain publicity for Holocaust denial and ‘British nationalism’.”

In a show of defiance, during her original trial Chabloz had even performed in France at the IV Forum De l’Europe, a far-Right nationalist convention.

She also attended a march by the Parti Nationaliste Français, an extreme French far-Right party, where she posed with a statue of Joan of Arc.

The convictions relate to posts on her blog linking to two 44 minute videos of two songs performed at the meeting of The London Forum.

Chabloz was sentenced to a 20-week jail term suspended for two weeks and ordered to carry out 180 hours of unpaid work.

The case originally started as a private prosecution by the Campaign Against Anti-Semitism (CAA) before the Crown Prosecution Service took over.

CAA chairman, Gideon Falter, said: “This is the first conviction in the UK over Holocaust denial on social media.

“Many brave British patriots died in the cause of defeating the Nazis. Alison Chabloz is no patriot and her actions defending the Nazis and claiming that the Holocaust was a fraud seek to defile their sacrifice.”

During the appeal Adrian Davies, defending, argued “it would be a very, very strong thing to say that a criminal penalty should be imposed on someone for singing in polemical terms about matters on which she feels so strongly.

“I would simply ask the court to find that however offensive her lyrics might have been to some, they do not cross the line to the grossly offensive.”

He had argued: “There’s no obvious risk of random members of the public coming across material posted on YouTube. Those who are already sympathetic to her interests and in her would access the material. The prospect of some random person accessing it was minimal.”

But Judge Christopher Hehir upheld the convictions, explaining that the court did not have to entertain “absurdity or fiction” in cases of Holocaust denial, adding: “We take judicial notice of the fact that the Holocaust occurred.”

He said: “She is a Holocaust denier… She is manifestly antisemitic and obsessed with what she perceives to be the wrongdoing of Jews… She appears to have lost all sense of perspective.”

Addressing her song (((survivors))), in which she mocks Anne and Otto Frank to the tune of Hava Nagila, Judge Hehir said: “It is by no means an exaggeration to call this song disgusting.”

He added: “She positively intended to be grossly offensive to Jews.”

Chabloz has not shown any remorse and appeared in court sporting a badge depicting a white power symbol, with a large group of supporters who packed the public gallery.

James Mulholland QC, prosecuting, told the court: “Abuse of a group of people for totalitarian reasons is not covered by Article 10 [freedom of expression].

“‘A theme park just for fools’ goes beyond a comment and into the area, without a doubt, of grossly offensive. It’s suggesting this is a whole industry created out of a fiction.

“That the entire Jewish people who survived the Holocaust are lying and creating this fiction and creating a theme park that is based on a lie.

“There can be no doubt there’s a full intention to offend in a gross manner.”