The blaze at Markland House on Silchester Estate. 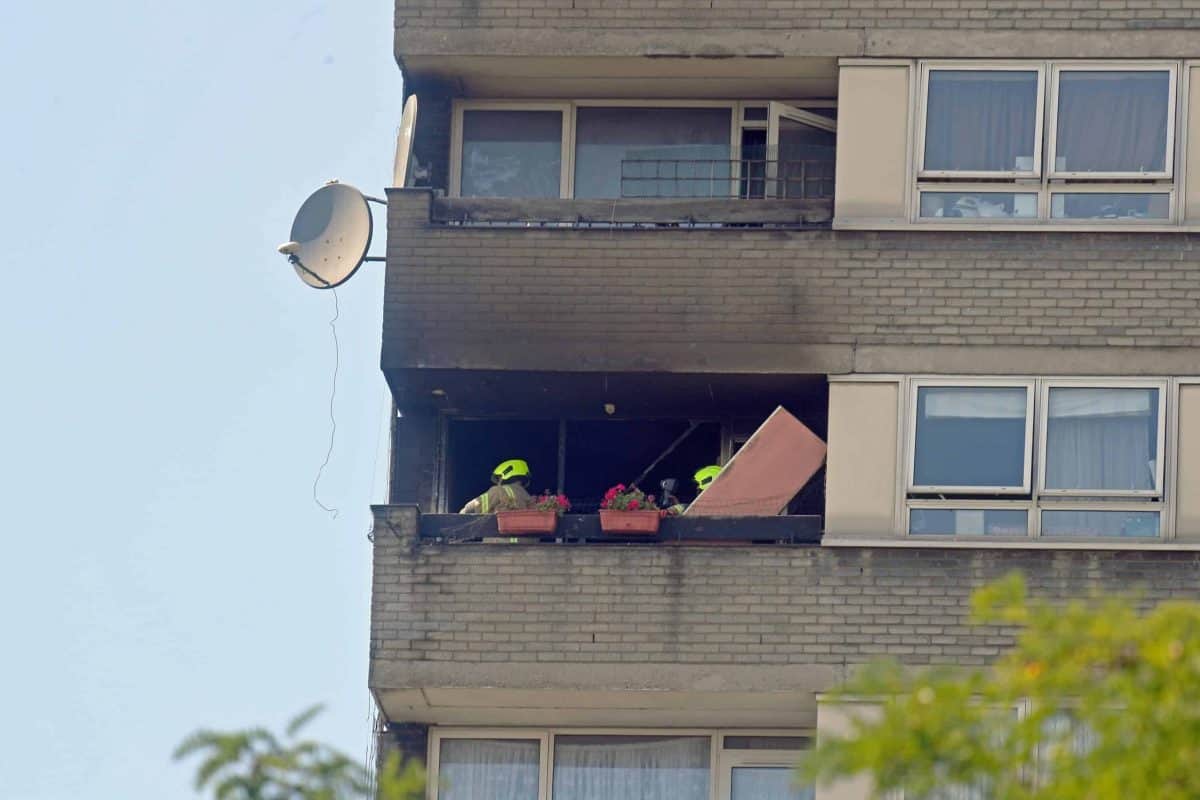 A fire has broken out on the 12th floor of a tower block close to Grenfell Tower with sixty firefighters called to the scene.

The tower block is less than a five minute walk away from Grenfell Tower, where 72 people were killed in a horrific blaze in June 2017.

Around 60 firefighters rushed to the tower block in Darfield Way, north Kensington after smoke was seen billowing up the side of the building shortly before midday.

The London Fire Brigade has tweeted: “Eight fire engines and around 60 firefighters have been called to reports of smoke in Darfield Way in #NottingHill.”

A balcony on the 12th floor is alight, LFB have said.

“Crews are speaking to residents in the building to reassure them,” a spokesman added.

One social media user tweeted: “I am at work near Holland Park and all I have heard for about 20mins straight is tons of sirens going off nearby.

“Half of London’s emergency services must be dealing with something around here.”

Firefighters were called at 11.39am about “smoke issuing” from a building, with 999 control officers aking 27 calls to the incident.

Scotland Yard said there were no reports of any injuries, while LFB said the cause of the fire is under investigation.

Resident Samantha Findley, 41, said she smelled what she thought was burning plastic in the tower block and immediately left her 10th floor flat.

She added: “I was concerned. I was very fearful.”

Standing looking at the block and pointing towards Grenfell Tower, she said: “That’s Grenfell there as you can see. That was my first instinct when I smelled smoke. Everyone is thinking of Grenfell.”

Dhin Chittenden said she cried as she ran down the steps from her 11th floor flat.

The 26-year-old receptionist, who has lived in the building with her husband for a month, said she was already fearful about another Grenfell Tower-type tragedy before Friday’s fire broke out.

She said: “I kept thinking about that. If it’s happened somewhere else then it could happen again.”

A maintenance worker at the tower block knocked on the couple’s flat door and told them to leave.

Standing in her slippers, Ms Chittenden said: “I just grabbed my phone, my keys and ran downstairs.”

Ms Chittenden’s husband Fernando Villanueva said: “When I opened the door (to leave the flat) I saw the smoke coming out of the lift.

“My wife, she was thinking of Grenfell Tower. She knows what happened there and was very concerned.”

Before the fire was put out, Danielle Bond, who was watching on from a nearby office block, claimed the fire had spread to six floors, telling the PA news agency: “The fire is spreading upwards, don’t know what it’s like inside but flames are going up the building on one side.”

LFB said the fire was under control by 12.55pm but said crews will remain on the scene on Friday afternoon.