Debt remains the #1 bugbear for families across the United Kingdom. For many people, debt appears to be an insurmountable problem, growing on a daily basis thanks to the interest-related payments on outstanding debt, rising inflation, and shrinking real-money wages. The UK economy is now beset with a series of challenges that require an urgent […]

Debt remains the #1 bugbear for families across the United Kingdom. For many people, debt appears to be an insurmountable problem, growing on a daily basis thanks to the interest-related payments on outstanding debt, rising inflation, and shrinking real-money wages. The UK economy is now beset with a series of challenges that require an urgent response from the Bank of England in the form of monetary tightening to prevent inflationary pressures.

The latest Monetary Policy Committee (MPC) decision from June 14, 2017 resulted in a 5:3 vote to maintain the bank rate at 0.25%. Additionally, corporate bond purchases in the amount of £10 billion and UK government bond purchases valued at £435 billion would remain in place. The Bank of England continues to target an inflation rate of 2%, despite the May reading of 2.9% exceeding the projected figure.

BOE expected to raise the bank rate in 2017

The BOE anticipates that inflation could rise as high as 3% or more in autumn 2017. This is being fueled by declining productivity in the UK, capital flight, and falling real wages. The UK faces a challenge in the form of a 4-decade low unemployment rate at just 4.6%. With the economy already at full employment, there are limited opportunities to wrest the initiative from Brexit-related fears. The Bank of England is leaning towards a rate hike by November 2017,

and this will place further pressures on the personal disposable incomes of Britons who find themselves in debt. For this reason, a sound plan is needed to eradicate the debt burden.

How big a problem is UK debt?

UK debt levels have plunged from 9.9% of GDP in 2010 to just 2.6% of GDP in 2016. The Office of National Statistics (ONS) indicates that UK government borrowing has plunged from £153.828 billion in 2009 to £57.096 billion by 2016. The Tory government has certainly made good on its promise to reduce government spending, excluding the public-sector banks. The current Chancellor of the Exchequer, Philip Hammond has vowed to reduce the deficit to 0, but no data has been issued.

Why is UK debt Rising so Fast? 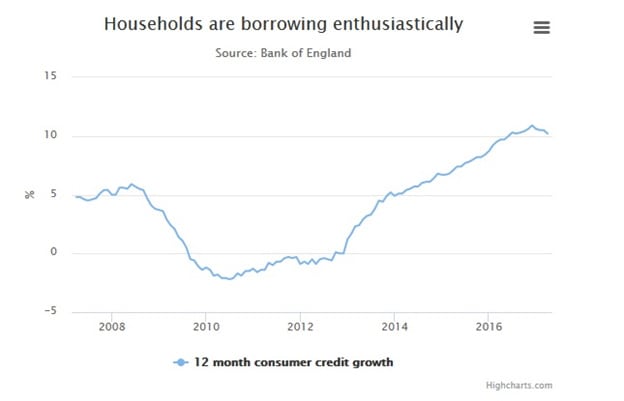 The Telegraph reported in May 2017 that household debt hit record-high levels. According to the data, unsecured debt per household had risen to £13,300 in 2016. This is the highest figure since the global financial crisis of 2008. With excessive borrowing, and falling wages now impacting UK households, calls for solutions to these problems are mounting.

Credit card borrowing is fueling increasing debt levels, with banks and financial institutions making credit lines available to Britons across the country. In March 2017, UK households increased their consumer debt by an additional £1.6 billion (Bank of England figures). Rising inflation and slow real-money wage growth have contributed to increased borrowing. As at March 31, 2017, 12-month consumer credit grew by 10.2%. This is fractionally lower than the November 30, 2016 figure of 10.9%.

Fortunately, UK citizens have options at their disposal. These include debt consolidation loans or personal loans to switch balances from high-interest credit to lower-interest loans. These loans have shown promise in reducing the overall debt burden by minimizing the impact of interest -related repayments on lines of credit. Various other options include applications for home equity loans where up to 80% of the GBP value of equity in the home can be borrowed.

Unsecured personal loans are notorious for their high levels of interest, and it behooves UK households to reduce balances on these debt burdens as quickly as possible. The dual objectives of reducing the overall debt burden and getting out of debt as quickly as possible must be met. Of all the options available, debt consolidation remains a favourite for UK households.

Why is Debt Reduction so Important?

After benefits and tax have been accounted for, the average UK household’s PDI (personal disposable income) increased to £19,106 in 2015. That represents a 3.7% increase year on year, but it is also marked by a 1.5% increase in prices for the same period. In February 2017, the annual pace of growth in credit card debt increased to an 11-year high of 9.3%. While interest rates have plunged, spending on credit cards has increased.