Accounts for both resorts, filed on Christmas Eve, along with government data, show they claimed more than £3 million through the UK Government’s furlough scheme, but redundancies were made at Turnberry. 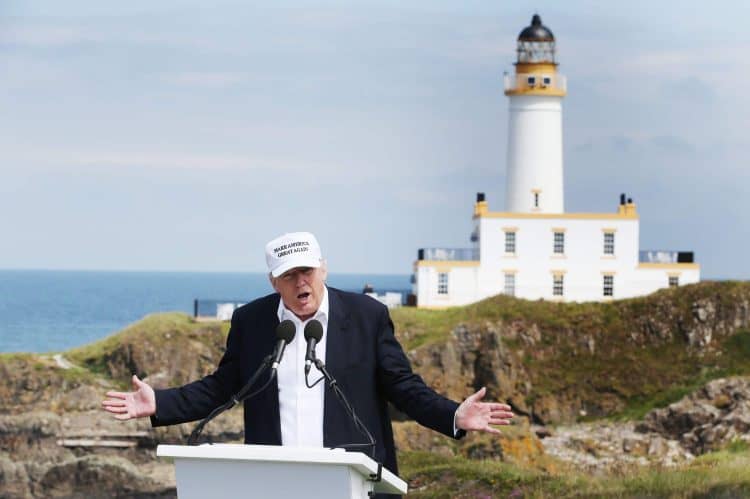 The accounts, signed by director Eric Trump, state: “Brexit has also impacted our business as supply chains have been impacted by availability of drivers and staff, reducing deliveries and availability of certain product lines.

“Prices have increased from additional freight and import duty charges.

“Staff availability has been a challenge from a combination of wage inflation with retail and logistics sectors increasing wages to attract staff due to increased business levels.

“Indirectly, the staffing pool has been reduced with lack of access to European staff for businesses in general resulting in greater demand for individuals previously available to the resort.”

On a visit to Trump Turnberry the day after the EU referendum vote in 2016, Donald Trump said people had taken “their country back”. He later wrongly claimed to have predicted the result, saying he visited the day before the referendum.

“Transportation, freight and import duty charges are also increasing, along with the overall cost of goods rising.”

A “lack of skilled labour in the sector” combined with rising inflation was said to be affecting cost and pricing.

The 2020 accounts for both resorts, filed on Christmas Eve, along with government data, show they claimed more than £3 million through the UK Government’s furlough scheme, but redundancies were made at Turnberry.

More than £2.3 million in furlough cash was claimed at Turnberry, with £451,770 claimed at Trump International at Balmedie.

The BBC reported a subsidiary of the company, SLC Turnberry Ltd, made further furlough claims of between £435,000 and £1.1 million from January to August 2021, according to Government data not included in the published accounts.

Golf Recreation Scotland Ltd paid out £324,000 for redundancies in 2020, with staff falling to a monthly average of 289 from 541 the previous year.

The accounts state: “The grant proceeds were utilised by the group in order to support the maintenance of jobs for many of the group’s employees while the resort was closed or at a reduced capacity due to the impact of the Covid-19 pandemic during the year.”

Employee numbers at Trump International Golf Club Scotland Ltd also fell, from an average of 84 in 2019 to 63 in 2020.

Its accounts stated: “The UK Government Furlough Scheme was helpful to retain as many jobs as possible, and the majority of employees were reinstated over the course of the year.”