She cannot flee, even to a bomb shelter. Her heart problems leave her too fragile to be carried down the flights of stairs to the basement when air raid sirens scream. 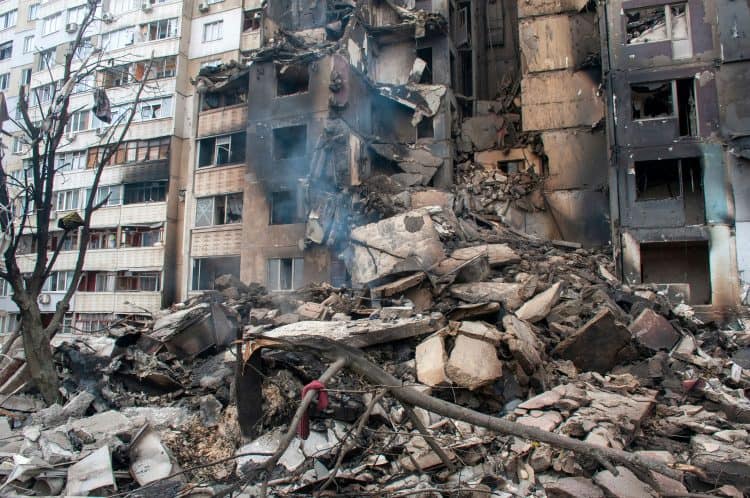 Alevtina Shernina was a young girl when she survived the brutal siege of Leningrad during the Second World War.

Eight decades later, so frail she can barely talk or move unassisted, she is besieged again.

The 91-year-old lives in Kharkiv, Ukraine’s second largest city and one of the most battered urban areas in Russia’s invasion.

The bombardment has come so close that windows in her apartment building were blown out.

And yet Ms Shernina cannot flee, even to a bomb shelter. Her heart problems leave her too fragile to be carried down the flights of stairs to the basement when air raid sirens scream.

She could communicate before Russia’s invasion but now is almost unresponsive, her daughter-in-law Natalia said.

A bombardment this week shook Natalia, too. She said she was in the kitchen pouring tea, “then I opened the door, and I couldn’t understand what was going on. There was fire behind the window, and windows were shattering”.

Cold air now comes in through a window left damaged by the attack. Her face pale, her eyes closed, Ms Shernina sits nearby in a blanket, an electric heater at her feet, a table-top of medication beside her.

“I feel inhuman anger from the fact that Alevtina began her life in Leningrad under the siege as a girl who was starving, who lived in cold and hunger, and she’s ending her life in similar circumstances,” her daughter-in-law said.

She spoke bitterly of the Russian forces and compared them to the “fascists” who besieged Leningrad, now called St Petersburg, for nearly 900 days.

“What sort of defenders are these?” she asked. “Who did they come to defend?”

She showed off an official card stating her mother-in-law’s status as a survivor of one of the deadliest sieges in history. German forces encircled and starved Leningrad from 1941 to 1944, and hundreds of thousands of people died.

Now Kharkiv, just 42 kilometres from the Russian border, sees little escape from the invasion. Some residents have managed to flee. Others, like Ms Shernina and her family, have little choice but to stay and wonder how long it will go on.

“We can’t leave because of Alevtina, she’s in such a state that she’s untransportable,” Natalia said. “We would like to leave, but my daughter is also here who’s working as a doctor at the 3rd Maternity Hospital. She leaves (for work) for four days at a time, because it’s dangerous to move around at night.”

Her daughter now walks the 10 kilometres to work, as public transport no longer operates in Kharkiv.

Only a third of her fellow doctors are left in the hospital. Some have been evacuated, fearing more Russian bombardment.

Related: Watch: MP calls on govt to tackle people who acted as proxies for oligarchs ‘like Arron Banks’