"We are both working, and receiving Universal Credit, and we still can't afford to buy food for the family and it's so wrong." 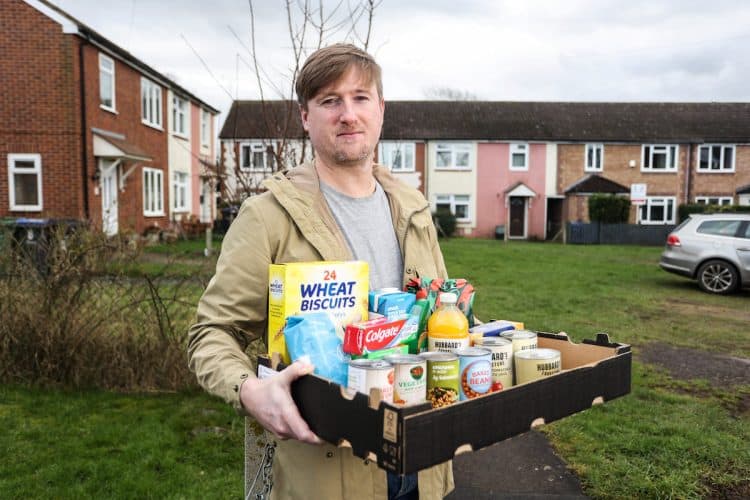 A family are forced to use foodbanks every week despite working full time after bills DOUBLED – as it’s announced cost of living rose at its fastest pace in nearly 30 years.

Stepdad-of-three Harry Lay, 36, said he is “in despair” after household costs soared, including his heating bills which doubled.

Along with his wife Kittie, 36, a part-time hairdresser, they face having to choose between food and heating.

It was announced yesterday (19) the cost of living rose at its fastest pace in nearly 30 years in the 12 months to December, driven largely by higher energy and food bills.

The UK’s Consumer Prices Index measure of inflation rose to 5.4% from 5.1% in November, the Office for National Statistics said.

Harry, from Cricklade, Wiltshire, fears what could happen if costs rise any further as they are already having to choose between buying food and keeping their kids warm.

A former soldier with the Royal Household Cavalry until 2012, he is calling for change and said his situation is “the reality for millions of others”.

He said: “We have had to use food banks every week for about six months now.

“We are both working, and receiving Universal Credit, and we still can’t afford to buy food for the family and it’s so wrong.

“We don’t have a single penny spare, not even down the back of the sofa – I once had to choose between buying loo roll or cooking oil.

“Most of our money goes on keeping the house warm enough so the little ones aren’t sat shivering – and all we can afford to do at the weekends is take them for a walk.

“I know we aren’t the only ones but it feels like nobody is talking about it – everyone is feeling the pinch, but it affects those at the bottom the most.”

When they first moved in, they would pay around £150 for 500 litres of oil to fuel their oil-powered central heating – which would last around three months.

But Harry said the costs began to creep up last year after Ofgem announced a cap was raised by 12% on energy tariffs – meaning prices could rise to some of the highest seen in the past decade.

From October, the cap rose by £153 per year for anyone not on a fixed-price deal – the same month that the £20-per-week Universal Credit uplift was withdrawn – meaning lower-income families suffered a double blow.

Harry said now the same 500 litres of oil for heating costs £380 – more than double what it was – and the family are left in “complete and utter despair” as a result.

He said: “It was hard enough to rustle up the money to fill our oil tank anyway, and now £400 is near impossible to find.”

The family say they limit using their central heating as much as possible to avoid needing to refill the oil tank, but even then they struggle.

In the past they have even bought large candles light their home to save money on electricity so it could instead go towards buying oil.

The parents’ main focus, they say, is ensuring the kids are “warm and fed” when they’re at home so they don’t realise the difficulty.

But Harry and Kitty say the rising fuel costs have made it impossible to do both on their budget – despite both working and having Universal Credit to supplement their incomes.

Harry said: “In the week with the kids at school, it’s alright because we’re out for most of the day.

“But weekends the kids are at home all day and the house is freezing cold because we can’t afford to refill the tank.

“It’s not like we can take them out anywhere because we can’t afford it – we’ve been out for a walk for seven weekends in a row, and what kind of life is that for a child?”

The family use their local food bank every week just to be able to put food on the table, and they have been doing that for the past six months.

But even then, they only just scrape by – with Harry saying he’s had to make tough decisions on which necessities they can buy.

He said: “Back in summer, we had to choose between buying loo roll or cooking oil because all I had was a few bits of change – the bank accounts were dry.

“We had to go and beg for a splash of oil from the neighbours to cook dinner that evening.”

Harry he has no idea how his family – or any others in his position – will manage long-term as prices continue to rise.

He is calling for action after years of struggling which has come to a head in the last year and left him desperate for change.

Harry said: “We are both working, and receiving Universal Credit, and we still can’t afford to buy food for the family.

“It’s just not sustainable – it feels like we’re in Dickensian times.

“It’s not me pleading poverty, or asking for charity, but I need people to know this is the reality for us and millions of others – some are much worse off than us.

“With the food bank help we are tiding over but we can’t be expected to rely on that forever.

“It’s really distressing – it’s exhausting and has a huge impact on our mental health.

“Everyone is feeling the pinch, but it affects those at the bottom the most – and if we all just shut up and put up, nothing will ever change.”