“Tory Britain. A country we could once be proud of.” 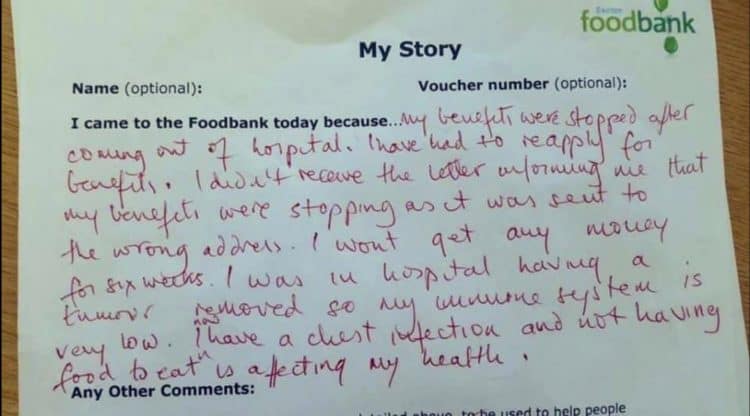 A heartbreaking note has been shared by hundreds of people after a cancer patient came out from hospital only to find out their benefits had been stopped.

The note, which was given to a foodbank, says the move means they would have no food whilst battling a chest infection following a tumour surgery.

“I won’t get any money for six weeks. I was in hospital having a tumour removed so my immune system is very low. I have a chest infection and not having food to eat is affecting my health.”

Colin Alexander, from Willington Quay, said: “Tory Britain. A country we could once be proud of.”

Shirley Yeates, from Southampton, said: “People voted to stop immigrants and benefit ‘scroungers’, this is the reality. Everybody who voted Conservative is responsible for this.”

Stu Hundson, from Knaresborough, added: “ ‘We should look after our own’. Yeah, how’s that going?”

And Neil Rigg said: “To think the Tories think it’s great to have foodbanks because under Labour there were none, so better.”

The note comes as last week, another foodbank reported being in urgent need of donations.

The foodbank admitted there has been a “surge in generosity” during lockdown which has now ended, the BBC has reported.

Rev Richard McKay, parish priest at Bristol’s St Nicholas of Tolentino Church, told the website: “The shelves were practically buckling under the weight of the food but now most of them are empty.

“We’re getting the same number of families, maybe even more families than before, as the poverty has really bitten in.”

The church said it was using its savings to meet recent demand and issued an appeal for donations before summer school holidays.

“Food poverty is growing in this country, not diminishing. It’s a total scandal in wealthy country like our own,” Rev McKay said.

Despite the situation many foodbanks and people relying on them find themselves in, a Tory MP suggested England footballer Marcus Rashford should have spent more time “perfecting his game” than “playing politics”.

Natalie Elphicke made the comment after Rashford missed a penalty in the Euro 2020 final, and targetted Rashford’s campaigning on food poverty.

In a late-night private message, Elphicke said: “They lost – would it be ungenerous to suggest Rashford should have spent more time perfecting his game and less time playing politics.”

The Dover MP apologised after the message was reported by GB News.

Rashford was also sent racist comments following the defeat, including from a man whose family benefited from the star’s free school meals campaign.