The Tories yesterday voted to spare one of their own MPs and "rip up the entire standards system", the paper reported. 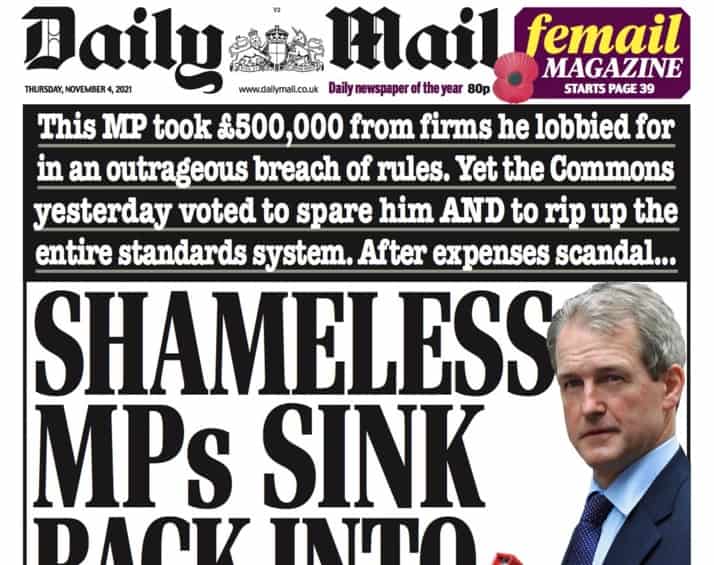 The nation’s papers are dominated by reaction to Boris Johnson’s Government voting to protect a former minister who was found to have breached lobbying rules – with ‘even the Daily Mail’ trending on Twitter this morning.

The Conservatives have been accused of “corruption” after protecting former minister Owen Paterson from an immediate suspension while seeking to rewrite the Commons disciplinary process.

Tories were ordered not to back the cross-party Standards Committee’s call for Mr Paterson to be suspended from Parliament for 30 sitting days after it found he repeatedly lobbied ministers and officials for two companies paying him more than £100,000 per year.

Dozens of Tories abstained and 13 rebelled after being told to vote instead for an amendment to establish a new, Conservative-led, committee to reconsider both Mr Paterson’s case and whether a new standards system is needed.

Despite the reservations of some on the Conservative benches, the move was passed with a majority of 18.

The Daily Mail ran the story on its front page this morning along with the title ‘Shameless MPs sink back into sleaze’.

A column in the paper, titled ‘Have MPs no shame?’, questioned how politicians can expect the trust and respect of the public if they turn a blind eye to egregious wrongdoing by colleagues.

According to Adam Bienkov the politician took nearly three times his MP salary for ‘paid advocacy’.

He also smeared the commissioner investigating him, Beinkov said.

Elsewhere, The Guardian and The Times report the PM has been accused of “corruption” and his decision labelled a “colossal misjudgement”.

The decision represented the Tories ripping up Parliament’s “anti-sleaze rules”, according to the i and The Independent, while Metro says the party took “The sleazy way out”.

The story also features on the front of the Financial Times, alongside the US Federal Reserve electing to wind down a mammoth stimulus programme.