“This small metal sign is an embarrassment and reveals the incoherence and futility of the ideology of ‘retain and explain'.” 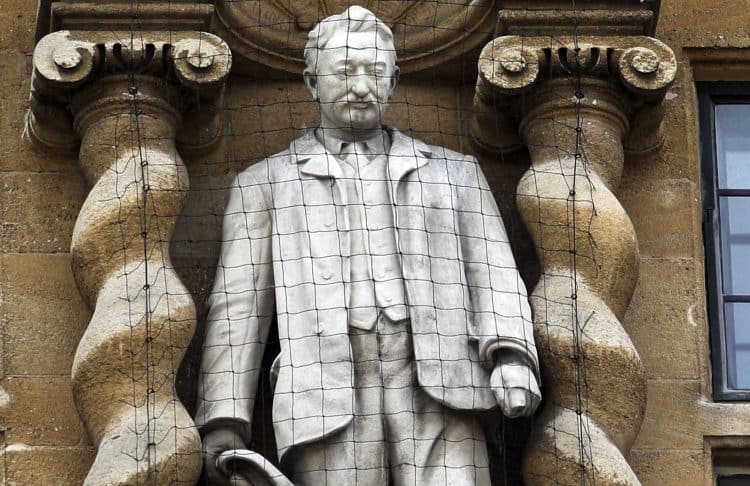 Oxford University has been slammed as ‘shameful’ for installing a new plaque under a controversial statue of Cecil Rhodes describing him as a ”committed British colonialist”.

The plaque underneath the statue at Oriel College was unveiled as part of Black History Month – but has been dismissed as being too simplistic.

The sign describes the mining magnate as a “committed British colonialist” who exploited “peoples of southern Africa” with “some of his activities [leading to a] great loss of life”.

The University college announced the statue of Rhodes would stay in May this year due to difficult legal and planning processes.

The new explanatory plaque reads: “This building was constructed by Oriel College in 1909-11 with money left in the will of Cecil John Rhodes (1853-1902), a former student of the college. The college commissioned a series of statues to front the building which included Rhodes at the top.

“Rhodes, a committed British colonialist, obtained his fortune through exploitation of minerals, land, and peoples of southern Africa. Some of his activities led to great loss of life and attracted criticism in his day and ever since.

“In recent years, the statue has become a focus for public debate on racism and the legacy of colonialism. In June 2020, Oriel College declared its wish to remove the statue but not doing so following legal and regulatory advice.”

Posting to Twitter, he wrote: “Until today, Oxford had two memorials to Cecil John Rhodes. Today, they are joined by a third – and one that’s arguably even more shameful for the college.

“This small metal sign is an embarrassment and reveals the incoherence and futility of the ideology of ‘retain and explain’.”

Oriel College said the text on the sign “isn’t intended” to give a comprehensive account of Rhodes and his actions during his lifetime, as that would be impossible to achieve on a single sign.

In a statement, a spokesman said: “It is intended to acknowledge the controversy surrounding the statue and to provide a link to other resources where people can find out more for themselves.”

Oxford city councillor Shaista Aziz, who was a member of the college’s Independent Commission of Inquiry into the Cecil Rhodes statue, said it is ‘amateurish’ .

She said: “To say Oriel College’s temporary contextualisation plaque is woefully inadequate and doing nothing to address the legacy of Cecil Rhodes, a loud, proud white supremacist, colonialist and slave owner and a deeply controversial figure of his time – would be an understatement.

“As an individual member of the commission, I feel this response is amateurish, disappointing, and disrespectful and far, far from where Oriel College needs to be along with the wider University.

“The fact this is also happening at the start of Black History Month will also add further hurt and disappointment.”

A college spokesperson said: “Because of planning restrictions and the building’s Grade II* status, more comprehensive and permanent contextualisation will take longer to achieve.

“The college has placed this notice outside of the building without making alterations to the building or its frontage, which would require consent.

“The college is fully engaged in enacting the recommendations made by the independent Commission of Inquiry earlier in the year to contextualise the Rhodes memorials.”

The sign is understood to be a temporary measure which will be replaced with a permanent response at a later date.