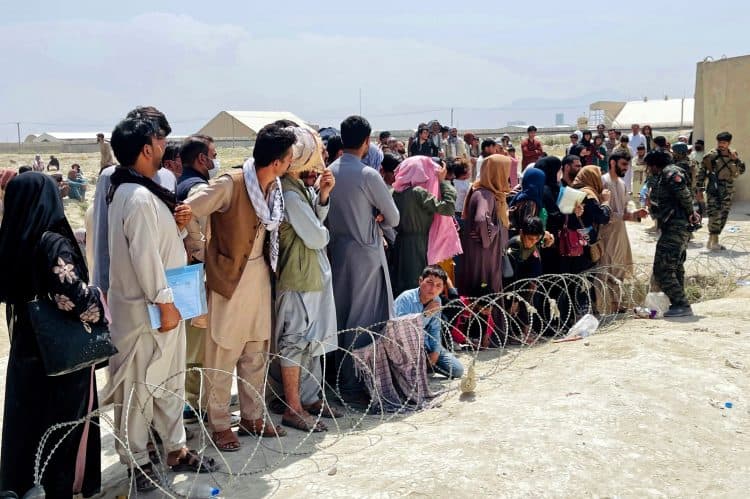 European nations repatriated tens of thousands of Afghans in the years before their home country was recaptured by the Taliban – even speeding up deportations in recent years.

According to official statistics, compiled by Vice, more than 70,000 Afghans were forcibly removed to Afghanistan from European countries – including the UK, Sweden and Germany – between 2008 and 2021.

The revelations come days after it Emmanuel Macron said that France will push for a European plan to “protect ourselves against major irregular migratory flows” from Afghanistan as people flee the Taliban.

The “initiative” will focus on “the fight against irregular flows, solidarity in the effort, the harmonisation of protection criteria and the establishment of cooperation with transit and host countries such as Pakistan, Turkey or Iran,” Macron said.

Speaking in the House of Commons on Wednesday, Boris Johnson vowed that Afghans already in the UK would not be deported.

“We will not be sending people back to Afghanistan and nor by the way will we be allowing people to come from Afghanistan to this country in an indiscriminate way,” he said.

Johnson has committed to resettling 20,000 Afghan refugees – though just 5,000 people will be allowed into the country in the next year.

The UK is launching a diplomatic push to encourage allies to join it in offering to take in Afghan refugees fleeing the Taliban regime.

Downing Street said the government will be encouraging international partners to emulate “one of the most generous asylum schemes in British history” – but Labour said the offer was not bold enough.

Shadow foreign secretary Lisa Nandy was critical of the government’s offer during an appearance on the BBC’s Question Time this week.

The senior Labour MP said it was “absolutely clear that 5,000 is too small a number over the next 12 months” and called for a “more generous offer” to be made.

The refugee debate comes after No 10 already announced an increase in humanitarian aid for Afghanistan, doubling it to £286 million.

The prime minister’s official spokesman denied that the money would be given to the Taliban, telling reporters it would be distributed in conjunction with the United Nations and other NGOs.

Satbir Singh, Chief Executive of the Joint Council for the Welfare of Immigrant, told Vice: “As one of the wealthiest regions on earth, Europe has the means and the duty to provide protection to those fleeing danger.

“But despite a small minority of the world’s refugees fleeing to Europe, too often our governments turn vulnerable people away, including Afghans whose lives have so clearly been in danger.

“The UK, in particular, has a shocking record of shutting the door to those in need – refusing asylum to around 60 percent of Afghans since 2008. And to this day almost 3,000 Afghans are still in limbo, waiting to see whether their claims for asylum are accepted.

“It’s clear the UK and the rest of Europe must do legions more to provide protection to people fleeing danger. Instead of pulling up the drawbridge, the UK and other European nations should come together to welcome Afghan refugees and support those already here with immediate grants of asylum.”

Related: Macron calls for plan to ‘protect ourselves’ against Afghan migration