"That is why this is a very serious time for the whole world, really, to come together," he said. 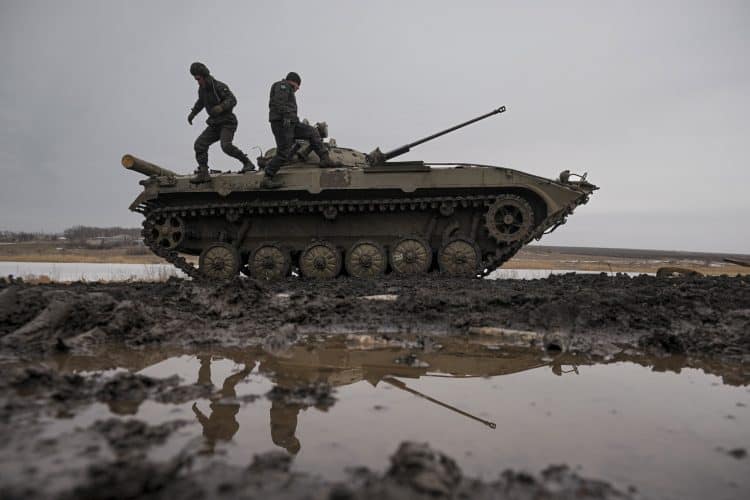 Europe is closer to war than it has been in the past “70 years”, a Tory minister has said.

James Heappey, the UK’s armed forces minister, said Russia had the logistical preparation for an invasion that goes beyond diplomatic showmanship.

He told the BBC: “All of the combat enablers are in place and my fear is that if all of this was just about a show to win leverage in diplomacy that doesn’t require the logistics, the fuel, the medical supplies, the bridging assets, the unglamorous stuff that actually makes an invasion force credible, but doesn’t attract headlines. Yet all of that is now in place too.

“That’s why there’s real urgency to the diplomatic negotiations that continue. That is why this is a very serious time for the whole world, really, to come together and to send a message to Russia that this is behaviour that will not be accepted and that we stand behind Ukraine, and that the financial sanctions if he were to cross the border would be absolutely profound.”

‘Bombs will be dropped on Ukraine in minutes’

Heappey said bombs will be dropped on Ukraine within minutes of Russian president Vladimir Putin giving the order.

He told Sky News: “My fear is it is very imminent, that’s not to say it’s definitely going to happen.

“This is a warning because minutes after Putin gives the order, missiles and bombs could be landing on Ukrainian cities.”

Heappey’s warnings come after he told British citizens on Friday to leave Ukraine immediately because there are around 130,000 troops on Ukraine’s border and thousands more at sea.

And, according to Britain, Russia has also brought in “combat enablers” such as medical supplies and fuel.

Heappey told the BBC that the Royal Air Force would “not be in a position to go in” and people there should “leave now”.

He said Brits who are trying to flee Ukraine will still have some consular assistance in the country, as well as in Poland and London.

But many embassy workers have already left Ukraine, and although commercial flights and motorways are still running, he admitted this may not last for much longer.

During the weekend, it emerged that western intelligence believes Russian forces would launch a lightning attack in order to capture Kyiv and change Ukraine’s regime. Heappey told BBC Breakfast that Russia can attack “very, very quickly”.

“We are now confident that the artillery systems, the missile systems and the combat air are all in place that would allow Russia to launch – at no notice – an attack on Ukraine,” he said.