The agreement between the world's two biggest CO2 emitters has been hailed as a "new hope" for meeting the 1.5C temperature goal. 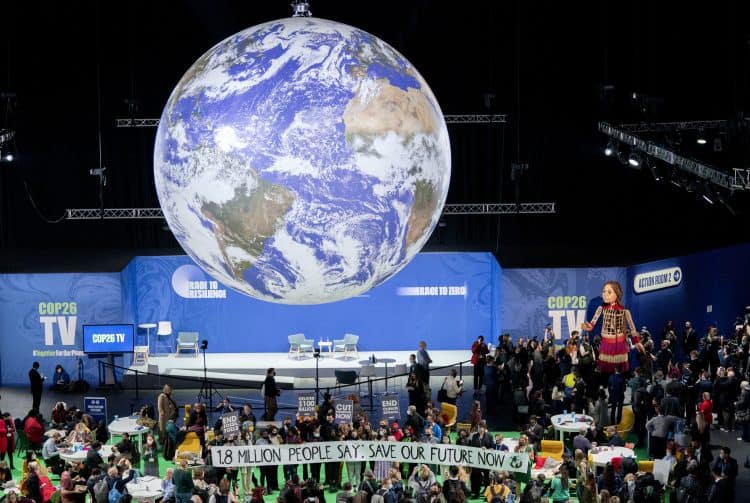 The European Union and United Nations both hailed the move as an encouraging and significant step – but Greenpeace warned both countries would need to follow the declaration with concrete action.

China and the US are the world’s two biggest CO2 emitters and, as COP26 in Glasgow nears its end, the two superpowers said they would work together to achieve the 1.5C temperature goal set out in the 2015 Paris Agreement.

The pledge is short on detail – but analysts say it represents an acknowledgment by China that the climate crisis warrants urgent attention, and an indication that Beijing will play a bigger role in confronting global heating.

US President Joe Biden and his Chinese counterpart Xi Jinping are now expected to hold a virtual meeting as soon as next week.

‘Only way to get this job done’

China’s climate envoy said the declaration was agreed following as many as 30 meetings with the US over the past 10 months.

It promises close cooperation on slashing emissions – while a joint working group will “meet regularly to address the climate crisis” over the next decade.

John Kerry, the US climate envoy, said the statement commits to a series of important actions “during this decade when it is needed”.

That includes working together to limit the powerful greenhouse gas methane, setting out the need to phase down unabated coal in this decade, as fast as is achievable, supporting successful COP26 talks and both countries agreeing to enforce their respective laws on deforestation, he said.

And China’s envoy Xie Zhenhua said there was more agreement between China and the US on climate change than divergence, making it an area with huge potential for future cooperation.

Kerry said: “The United States and China have no shortage of differences, but on climate, co-operation is the only way to get this job done.

“This is not a discretionary thing, frankly, this is science, it’s maths and physics that dictate the road that we have to travel. And we cannot reach our goals unless all of us work together.

“Every country, China and the United States particularly, as the two largest emitters in the world, both have to help show the way.

“We need to raise ambition and we need to take action in this decisive decade.”

Xie said: “We will jointly strengthen climate action and cooperation with respect to our national situations and circumstances to accelerate a green and low carbon transition.”

He said: “Climate change is a common challenge shared by humanity, it bears on the wellbeing of future generations.

“Now climate change is becoming increasingly urgent and severe, (turning) it from a future challenge to an existential crisis.”

He continued: “In the area of climate change, there is more agreement between China and the US than divergence, making it an area with huge potential for future cooperation.

“We are two days away from the end of the Glasgow COP so we are hopeful that this joint declaration can make China and the US’s contribution to the success of COP26.”

Experts cautioned that the surprise agreement must now be followed by policy commitments.

Genevieve Maricle, director of US climate policy action at the WWF, told the BBC that the announcement represented “new hope” that the 1.5C limit might be achieved.

But she said “we must also be clear eyed about what is still required if the two countries are to deliver the emission reductions necessary in the next nine years”.

Thom Woodroofe, an expert in US-China climate talks, said: “While this is not a gamechanger in the way the 2014 US-China climate deal was, in many ways it’s just as much of a step forward given the geopolitical state of the relationship.

“It means the intense level of US-China dialogue on climate can now begin to translate into cooperation.”

Frans Timmermans, EU climate policy chief, said the pact provided cause for optimism. “It shows … that the US and China know this subject transcends other issues. And it certainly helps us here at Cop26 to come to an agreement,” he told Reuters.