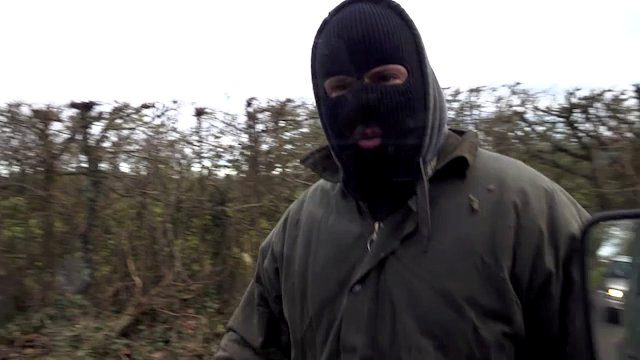 This menacing footage shows the moment hunt saboteurs were threatened and chased off by masked pro-hunt “thugs” on quad bikes.

The saboteur group had followed the Avon Vale Hunt on Saturday afternoon (Jan 4), after spotting several ‘redcoats’ out riding.

Footage filmed from inside the hunt sabs’ Land Rover shows a couple of members of the group standing calmly in front of their vehicle, keeping an eye on the hunters as they rode out.

“Your worst nightmare has just turned up.”

A redcoated huntsman can be seen in the footage riding past the hunt sabs’ car and telling them: “Your worst nightmare has just turned up.”

Seconds later, the encounter turned hostile – as a red quad bike sped towards the hunt sabs’ car, narrowly avoiding crashing into it.

The quad bike, which had no number plates, pulled up alongside the Land Rover and two masked men climb off and began thumping on the windows and yelling at the sabs inside to “f**k off”.

And as the hunt sabs begin to drive off, the masked men jump back on their quad bike and pursue them – continuing their intimidation for almost two minutes as they drive.

The Bath Hunt Sabs group said the encounter, which took place near the village of Atworth, Wilts., left them feeling “unsafe” – but they believe they know the identity of the two masked men.

A spokesperson for the group said: “They act as private thugs for a number of different hunt groups in the area.

“The men on the quad bike verbally abused and threatened us. They tried to open the doors of our vehicle and smash the windows.

“They told one of the male sabs to get out of the vehicle. He did not.

“We felt unsafe, so once we saw the hounds being packed up the decision was made to leave the area.”

The sabs group said they had initially driven to disrupt a pheasant shoot on Saturday morning at Colerne Air Base, near Chippenham, Wilts., – seven miles from Atworth.

The group was driving back towards Bath, Somerset, when they spotted the hunt redcoats out on horseback near Atworth.

The group spokesperson said: “There were about 20 horses in the field, two or three redcoats and numerous support vehicles in attendance, some with young children and toddlers present.

The Bath Hunt Sabs spokesperson added: “The hunt members were initially quite timid around us.

“But once the hired ‘goons’ arrived to try and intimidate us, they became very excited and came over and told us our ‘worst nightmare’ had just arrived.”

The video footage, filmed out of both sides of the Land Rover, shows the menacing masked men jump off their quad bike and flank the car, violently thumping against the windows.

As the Land Rover began to drive away, the quad bikers followed, continuing to thump the windows and the side of the car, and to yell abuse at the sabs inside.

Their chase saw the quad bikers narrowly avoid a cyclist on the country road, mount the grassy bank alongside the Land Rover, and at one point even drive into the side of the Land Rover.

Eventually, after almost two minutes of giving chase, the bikers stopped their chase and the hunt sabs left the scene.

The group have not reported the incident, as a spokesperson said: “The police never do anything about this type of behaviour.”

An Avon and Somerset Police spokesperson said: “If a crime was reported it would be looked into, assessed, and dealt with accordingly – but it would need to be reported first.”

And now, the Bath Hunt Sabs are attempting to fundraise to purchase a second vehicle for their group – in order to allow more sabs to travel to hunts.