The landing site for Julius Caesar’s invasion of Britain more than 2,000 years ago has been identified for the first time – in Kent. His ships arrived at Pegwell Bay on the Isle of Thanet at the north east point of the county, a spot never previously suspected because it was separated from the mainland. […] 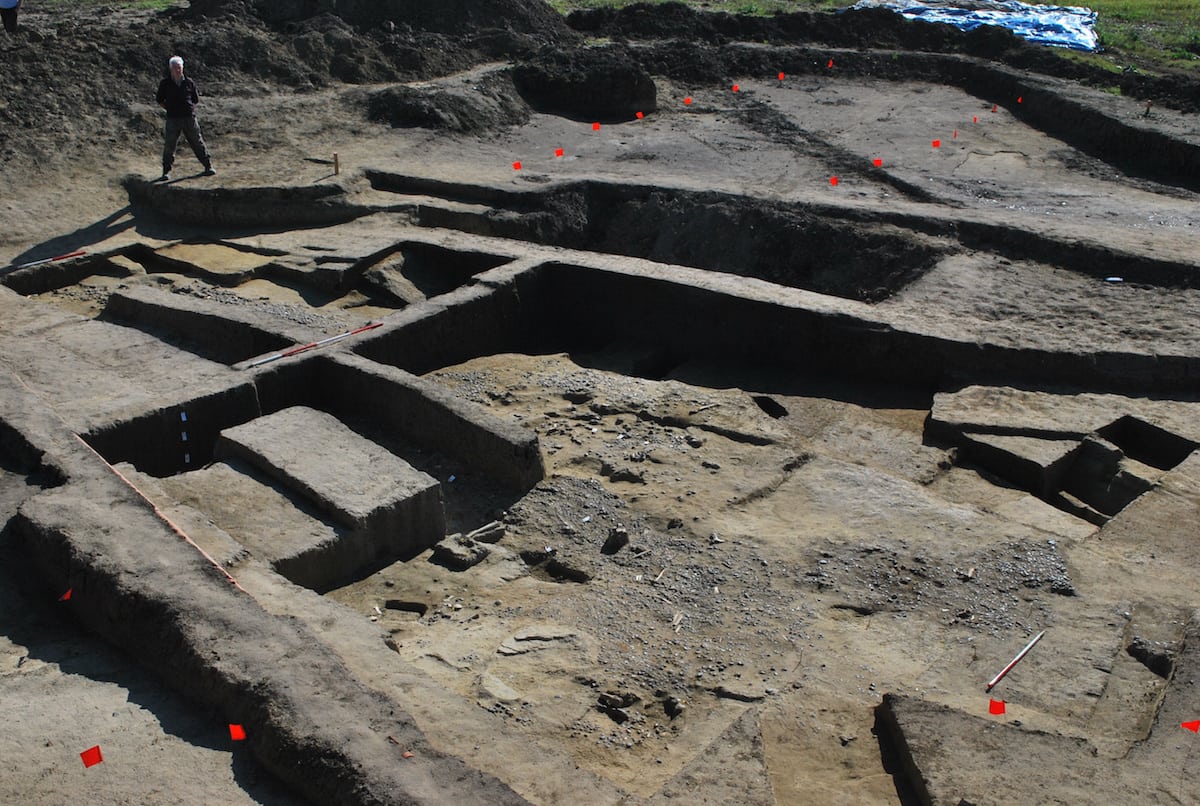 The landing site for Julius Caesar’s invasion of Britain more than 2,000 years ago has been identified for the first time – in Kent.

His ships arrived at Pegwell Bay on the Isle of Thanet at the north east point of the county, a spot never previously suspected because it was separated from the mainland.

But the location matches Caesar’s own personal account with three clues about the landscape being consistent with the amazing discovery.

These were its visibility from the sea, the existence of a large open bay and the presence of higher ground. His army immediately constructed a fort on it.

Iron weaponry, including a javelin, and other artefacts dug up at the neighbouring hamlet of Ebbsfleet overlooking the bay suggests it was a Roman base dating to the 1st century BC.

It was up to 20 hectares in size and the main purpose would have been be to protect Caesar’s fleet that had been drawn up on to the beach.

The site is now more than half a mile (900 metres) inland. But at the time of Caesar’s invasions it was closer to the coast.

It has a ditch up to 16 and a half (5 metres) wide and six and a half feet (2 metres) deep. Radiocarbon dating of pottery also fits the period.

Dr Andrew Fitzpatrick, of the University of Leicester’s School of Archaeology and Ancient History, said: “The site at Ebbsfleet lies on a peninsular that projects from the south eastern tip of the Isle of Thanet.

“Thanet has never been considered as a possible landing site before because it was separated from the mainland until the Middle Ages.

“However, it is not known how big the Channel that separated it from the mainland, the Wantsum Channel, was.

“The Wantsum Channel was clearly not a significant barrier to people of Thanet during the Iron Age and it certainly would not have been a major challenge to the engineering capabilities of the Roman army.”

The last full study of Caesar’s invasions was published more than a century ago. In the course of his Gallic Wars he invaded Britain twice, in 55 and 54 BC. But his landing sites have never been found.

The first invasion, in late summer, was unsuccessful, gaining the Romans little else besides a beachhead on the coast of Kent.

It was prompted by the discovery of the large defensive ditch in archaeological excavations before a new road was built.

The shape was very similar to some of the Roman defences at Alesia in France, where the decisive battle in the Gallic War took place in 52 BC.

Caesar’s own account of his landing in 54 BC backs the study which was funded by the Leverhulme Trust and will be featured in BBC Four’s Digging For Britain tonight (Wednesday).

Explained Dr Fitzpatrick: “Sailing from somewhere between Boulogne and Calais, Caesar says at sunrise they saw Britain far away on the left hand side.

“As they set sail opposite the cliffs of Dover, Caesar can only be describing the white chalk cliffs around Ramsgate which were being illuminated by the rising sun.

“Caesar describes how the ships were left at anchor at an even and open shore and how they were damaged by a great storm. This description is consistent with Pegwell Bay, which today is the largest bay on the east Kent coast and is open and flat.

“The bay is big enough for the whole Roman army to have landed in the single day that Caesar describes. The 800 ships, even if they landed in waves, would still have needed a landing front 1-2 km (0.62 to 1.24 miles) wide.

“Caesar also describes how the Britons had assembled to oppose the landing but, taken aback by the size of the fleet, they concealed themselves on the higher ground. This is consistent with the higher ground of the Isle of Thanet around Ramsgate.

“These three clues about the topography of the landing site; the presence of cliffs, the existence of a large open bay, and the presence of higher ground nearby, are consistent with the 54 BC landing having been in Pegwell Bay.”

It has long been believed as Caesar returned to France the invasions were failures and had no lasting effects on ancient Britons because he did not leave a force of occupation.

The campaigns were short so it was also thought there would have been few, if any, archaeological remains.

The team challenge this idea by suggesting in Rome the invasions were seen as a great triumph. The fact Caesar had crossed the sea and gone beyond the known world caused a sensation.

At this time victory was achieved by defeating the enemy in battle, not by occupying their lands.

They also suggest they had longstanding effects which were seen almost 100 years later during Claudius’ invasion of Britain.

Principal investigator Prof Colin Haselgrove, also of the University of Leicester, said: “It seems likely the treaties set up by Caesar formed the basis for alliances between Rome and British royal families.

“The conquest of south east England seems to have been rapid, probably because the kings in this region were already allied to Rome.

“This was the beginning of the permanent Roman occupation of Britain, which included Wales and some of Scotland, and lasted for almost 400 years, suggesting Claudius later exploited Caesar’s legacy.”

The fieldwork for the project was carried out by volunteers organised by the Community Archaeologist of Kent County Council who worked in partnership with the University of Leicester.

Simon Mason, principal archaeological officer for Kent County Council who oversaw the original road excavations, said: “Many people do not realise just how rich the archaeology of the Isle of Thanet is. Being so close to the continent, Thanet was the gateway to new ideas, people, trade and invasion from earliest times.

“This has resulted in a vast and unique buried archaeological landscape with many important discoveries being regularly made.

“The peoples of Thanet were once witness to some of the earliest and most important events in the nation’s history: the Claudian invasion to start the period of Roman rule, the arrival of St Augustine’s mission to bring Christianity and the arrival of the Saxons celebrated through the tradition of Hengist and Horsa.

“It has been fantastic to be part of a project that is helping to bring another fantastic chapter, that of Caesar, to Thanet’s story.”